They say ‘The best things in the world are free’. I am acquainted with a lot of things that abide by this adage. But recently, I was made aware of something that is one of the best if not the best but isn’t really free. In fact here in India, it costs north of INR 16 lakhs Ex-Showroom. The ‘thing’ in question here is obviously a motorcycle. A motorcycle from BMW Motorrad. The BMW R nineT Racer.

The R nineT belongs to the heritage class of motorcycles from Bavaria. The original R nineT was introduced back in 2013. With the retro looks and modern amenities, it did not take long for people all around the world to swoon over the bike. Since then it has spawned quite a few variants like the Scrambler, Pure etc. In India, we only have 3 variants though. The regular R nineT, the R nineT Scrambler and the R nineT Racer. I don’t think it would be easy to describe this particular motorcycle’s looks and design. My personal opinion, this is almost the best looking motorcycle I have ever ridden. Most of the Racer’s old school charm is exuded by the café-racer design theme of the motorcycle. But in addition to that, the real crown jewel here is the paint scheme.

The white colour with BMW M themed stripes that extend from the fairing to the tail add to the already handsome looks of the R nineT Racer. The tried and tested ‘Boxer’ engine protrudes out of the bike which may seem radical at the moment but makes a lot of sense when one looks at the bike in flesh.

Keeping in line with the café-racer design language, the BMW R nineT Racer is stripped down to bare essentials. So much so that it does not even have a sub-frame for the pillion assembly. The pillion assembly is offered as a part of the optional accessories on offer.

The minimalistic half-fairing extends from the headlight, just coming up to the muscular tank. The tank also has the BMW logo which earns a lot of attention even before one starts to figure out how good looking the bike is. Bits like the blacked-out alloys and forks, LED taillamp, a BMW logo inside the headlamp just portray the near-obsessive attention to detail.

The fit and finish are top-notch and worthy of the BMW tag. And the price tag as well. 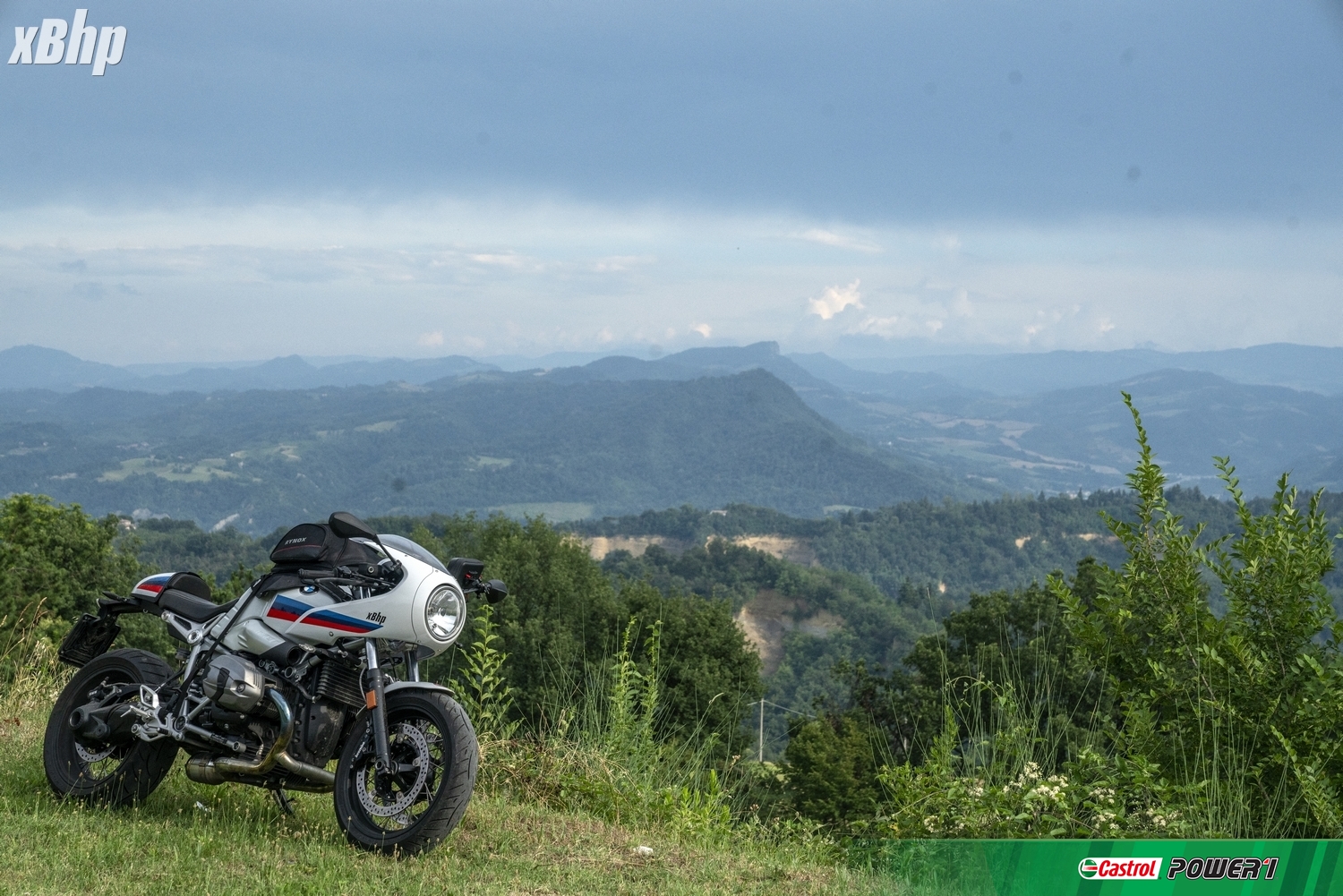 The R nineT Racer features a ‘Boxer’ engine like quite a few other BMWs such as the R 1200 GS. Although the R nineT features an air-cooled unit instead of liquid cooling. The 1170cc, air-cooled, flat-twin on the R nineT also has 4 valves per cylinder, a central balancer shaft and electronic fuel injection. It produces 110 bhp of power at 7750 rpm and 116 Nm of torque at 6000 rpm.

The engine, like a true boxer, delivers enough power to keep you excited and the refinement helps the rider maintain good speeds for longer durations as well. Not that one would prefer that (more on that later) but it is capable of doing so. The real magic is not the power because it isn’t going to rip a hole through time and space continuum like an S 1000 RR. The real magic is the power delivery and accessibility.

A big ‘Boxer’ like the one featured on the BMW R NineT Racer offers a rewarding experience. But twins, especially the large capacity (1,170cc here) ones, undergo a lot of stress when compared to the smoother inline-4s. The heat generated is substantial and engines like these easily cruise past the safe operating temperature if neglected. That is where the engine oil comes in. Good engine oil, like the ones from our tried and tested Castrol POWER1 range, makes sure that the engine runs cooler and smoother. The wide variety of grades available ensure that you always have an option despite the varying climate and other factors.

The R nineT offers a very linear power delivery with loads of torque available right from the lower rev-range. It isn’t a high revving engine which is apparent from the 8500 rpm redline. But it’s a relaxed engine powerful enough to keep boredom miles away from the rider. And the exhaust note of the typical ‘boxer’ is simply a delight. It can keep a lot of people engaged even if revved at a standstill.

The R nineT is a shaft-driven motorcycle and features a 6-speed gearbox which is a joy to go through. Typical BMW smoothness in the gearbox makes a joyous riding experience but then again, this isn’t a motorcycle that would require a lot of gear-changes. One can easily cruise around from anywhere in between 100 km/h and 160 km/h in the top gear leaving the bystanders awestruck as they see a beautiful blue-red blur pass them by. This is the part where one begins to differentiate between what we discern by Racer and what BMW meant by a racer (read café-racer). Café-racers were meant to provide acceleration, speed, and stability mostly in a straight line. That’s what the R nineT Racer does. The 1491 mm wheelbase ensures optimum stability in a straight line but also robs it of the agility that we usually have in modern-day bikes.

The 43 mm telescopic forks up-front and central spring strut at the rear take care of the suspension duties. Now the suspension setup is rather stiff. It is capable of taking care of the slight undulations but potholes and broken patches on the road are transmitted directly to the rider to a certain uncomfortable degree.

The engine is the load-bearing unit in the R nineT Racer’s frame and the chassis seems quite steady while one looks to carve corners in style. But again turning a motorcycle that weighs 220 kgs (wet) and has such a long wheelbase certainly takes some doing. And after spending some time on the saddle, one realizes that maybe this motorcycle is not meant to do that in the first place. Not that it cannot do that, but it takes a lot of effort from the rider’s part and the rewards are beautiful photos and a whole lot of attention. The cast-wheels are shod with Metzeler Roadtec tyres which offer a good balance between dry and wet grip. I can attest to the capabilities of the tyres as I encountered heavy rain while coming back to Milan from the World Ducati Week 2018 and the tyres performed satisfactorily be it dry roads or wet roads. Even the twisties seemed tameable on the Roadtecs.

Coming to the ergonomics, the seating position is very Racer-y with low set handlebars, high set rearward footpegs and the rather low-seat. Saddle up on the R nineT Racer and even the taller riders feel like they are lying on the bike rather than sitting on it. This, despite looking uber cool, isn’t the most comfortable position to be in if you plan to ride for long distances.

The seating position and the half fairing do help in reducing the windblast at higher speeds, but then again, long rides on the R nineT Racer will tire out riders with the strongest of cores quite quickly. The tank bag from Rynox does its job well even on a rather difficult tank of the R nineT Racer. Big enough to accommodate essentials, resistant enough to keep them safe even in adverse weather… as you can see in the photo. A motorcycle that costs upwards of INR 16 lakhs here in India and makes around 110 bhp of power with an 1170 cc twin engine might not make sense to a lot of people. And then the rather harsh ride and tiring seating position just add to the hiatus in the decision to buy this motorcycle.

But there are different motorcycles that serve different purposes. The ‘Racer’ tag does not mean that this bike is going to be setting lap-records on a track. It simply aims to portray the legendary superbikes from the 70s that graced the best of riders, from racers to actors.

This is a motorcycle on which you sit donning a classic leather jacket and boots with rugged denims. You put on that classic half-face helmet and go around the town to enjoy the boatload of attention that it is going to get you. This is a motorcycle which does not only look good, it makes the rider look so good that they might feel confident enough to ask Penelope Cruz or Ursula Andress out if they encounter them walking around. And that my friends, isn’t an exaggeration. Not to mention the pure old-school charm that the motorcycle possesses.

If you feel like you are someone like Steve Rogers or Bucky Barnes who does not belong to this time, or someone who would like to belong to those beautiful times, then this is the motorcycle for you. I, for one, would gladly go for the BMW R nineT Racer, ride around town in style and go find myself a Peggy.