We have had a lot of fun with the Honda CB1000R… the one of the old. We took it for a rather long ‘spin’ and what we can say about it is that it was a Honda. Understatedly powerful, built to last, friendly, and so easy that you almost want to smooch the thing. In addition to all that, it looked menacing too! Here are some photos of it But recently, we got to test the latest iteration with the neo-retro-cafe avatar. How is it? Short Answer: Heck yeah! Long answer: Read on…

The new Honda CB1000R looks great… it really does but it is disorientingly compact for a litre-class streetfighter. The CB1000R is as understated as they come when it comes to the looks… just like the performance which we’ll talk about later.

As we stated, Honda has gone with the neo-retro-cafe treatment for the CB1000R. Classic cafe racer elements are studded with modern touches… or it could be the other way around. But overall, the package is neat and clean and we love the fact that excessive use of plastic and stuff is avoided. Overall, we personally liked the previous CB1000R better. But for now, the neo-retro cafe theme is here to stay and it has even trickled down to the smaller siblings; the CB600R and the CB300R. Here are some photos of the CB1000R with the youngest member of the neo-retro-cafe family, the CB300R. 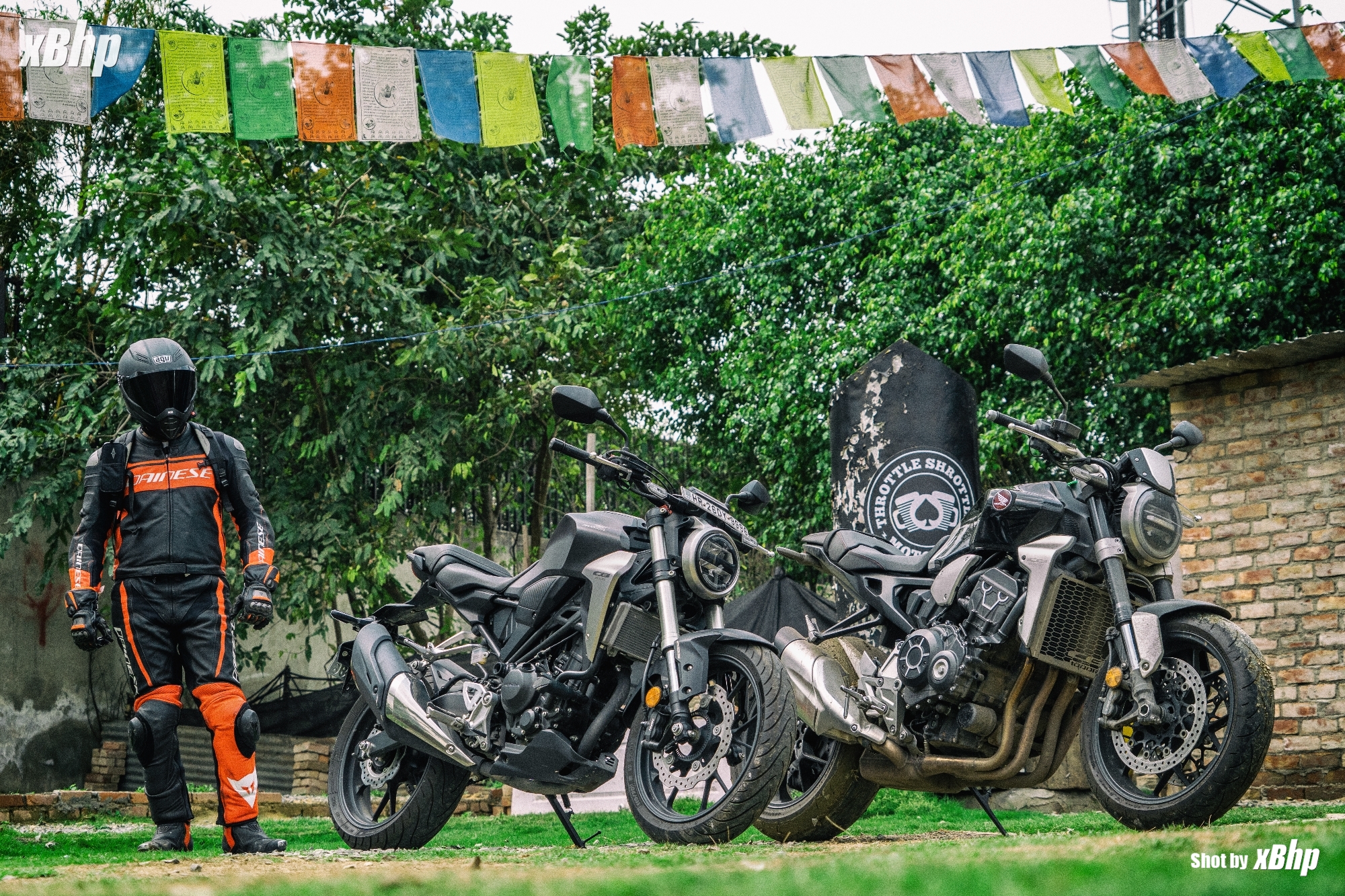 For the current CB1000R, we’ll say that it is minimal, it has a round-headlamp, it is a streetfighter, and the exhaust looks awesome (sounds that way too). There isn’t much to jump-off-a-cliff for but there isn’t anything to complain about either. Short, sweet, and purposeful and a Japanese Labrador.

A 998cc, liquid-cooled, DOHC inline-4 is responsible for powering the Honda CB1000R. It is also responsible for making us ecstatic. It is motorcycling incarnate. Courtesy the mill, the CB1000R can be insanely fun, stupid fast and ridiculously easy.

Thumb the starter and a calm growl greet you. It is silky smooth and vibrations are absent throughout the rev range. It is one of those bikes on which even the first time on the saddle feels like you are familiar with the bike. Very accomodating (figuratively… yet).

Slot into the first gear and you quickly realize that like most Hondas, this motorcycle also gets HST… Honda Slick Transmission? No? Anyway, the 6-speed gearbox is very smooth, confident and positive. Whether you are shifting up or shifting down, it is as buttery and as easy as they come. Of course, the Quickshifter helps with the shifts, and the slipper-clutch with autoblipper is there for a lighter clutch action… but still, we’d like to say that all the goodness comes from HST. Around the city or in regular traffic, the motorcycle finds its way with ease and the engine’s tractability is to be commended. Inline-4s are usually attributed to being sloths in the lower rev-range. The CB1000R does not feel that way. At least not around the city. What we mean by that is that when you are trying to stitch corners, the lack of outright grunt in the lower and lower-midrange is apparent. Not enough to dissuade one, but it is there.

There’s ride-by-wire with 4 rider modes ((Rain, Standard, Sport and User) but, and this is for the greater good of humanity, they are not intrusive at all. The riding experience is not hampered at all and this is one of the reasons why the Honda CB1000R is so much fun. It is just… organic! Overall, it is a refreshing experience. It was fun to be on an inline-4 streetfighter rather than a v-twin or something of that sort. And the Honda CB1000R takes the inline-4 fun even further and that is why it may very well be the USP of the Honda CB1000R. It is just too much fun… just like a Japanese labrador.

So, the motorcycle is middleweight-light and compact in addition to being litre-class powerful. And it is evident in the handling. The Honda CB1000R is perhaps the easiest turning motorcycle we have ever ridden. It just flicks from one side to another like it was nothing. The Steel mono backbone chassis and Showa Separate Function Big Piston Forks come together to create a heady concoction and the hangover will stay for a while. The front suspension is preload, compression and rebound adjustable while the rear is preload and rebound adjustable. That is something we believe is a good add on because the stock settings are a tad too soft. Anyway, once you tinker around enough and find the perfect settings for yourself, you’ll find that the Honda CB1000R is enough to shred the edges of the tyres rather quickly.

Braking is provided by Tokico and handled by 310mm twin discs up front and 256mm single disc at the rear. ABS is standard on both the ends and the performance… it’s not earth-shattering but it is adequate and gets the job done. The feel on the lever is on point but a little more bite upfront will go long in infusing the rider with more confidence. All in all, the Honda CB1000R is a fantastic handler and it is willing to cooperate with the rider whether they’d like to sail through the canyons or carve corners on a racetrack. Versatile… just like a Labrador.

It is sad that we won’t be able to deem the CB1000R as a Japanese Labrador in this section because you should not try to ride a Labrador… not just because of PETA but because it is not cool. Anyway, at 830mm the saddle height may be a bit high for some people. Once astride though, you encounter a paradox. The motorcycle is very small to look at and rather spacious once you start riding.

The tank recesses help the rider get a lot of leverage via their knees. Talking about leverage, the wide handlebar also favours it. The rider’s triangle is well-balanced and the riding stance isn’t overly sharp or completely bland. The footpeg feelers though are a bit too long and are scraped easily. But it may be good for some as it is a matter of pride… The 135 mm ground clearance though is certainly not. In the overall scheme of things, the Honda CB100R is comfortable to ride and easy to live with…

Mileage and Range: We have heard that you can expect about 20 km/l and that multiplied with the fuel tank capacity (16.2 L) gives you a range of a smidge over 320 km. Not too bad for a litre-class streetfighter.

Rearview mirrors: This is where a lot of manufacturers can learn from Honda. The mirrors are fantastic and offer a good, vibe-free view of what you’re leaving behind… once you put them in the right position. Now that is a task… a tall one. Bad dog!

Build Quality: HONDA! And therefore, the fit and finish are top-notch. A special mention for the design of the exhaust which, by the way, sounds like a million bucks at full song.

Instrument Cluster: Understated… a bit too much. The inverse LCD was seemingly a good idea but it is a bit difficult to read in direct, bright sunlight. Navigating through the menus and changing settings takes a bit of work. But it can be deemed as something you can get used to… probably. Okay, so many of you may feel like this was more a review of a fantastical being known as Japanese Labrador than the Honda CB1000R. But there’s a solid reason for that. In a world where even streetfighters are gunning for 200+ bhp and a whole darn Siri on board to control the various parameters, the Honda CB1000R is old school literally and figuratively… visually and mechanically (performance).

And there’s a certain allure associated with old-school. Digital meters may be all the rage nowadays but when one looks at an analogue tacho and that needle rushing towards the redline, it is a different kind of high. Riding the Honda CB1000R invokes similar emotions. Organic and Pure… and guess what… we have found a top 5 contender for our favourite breed of dogs.