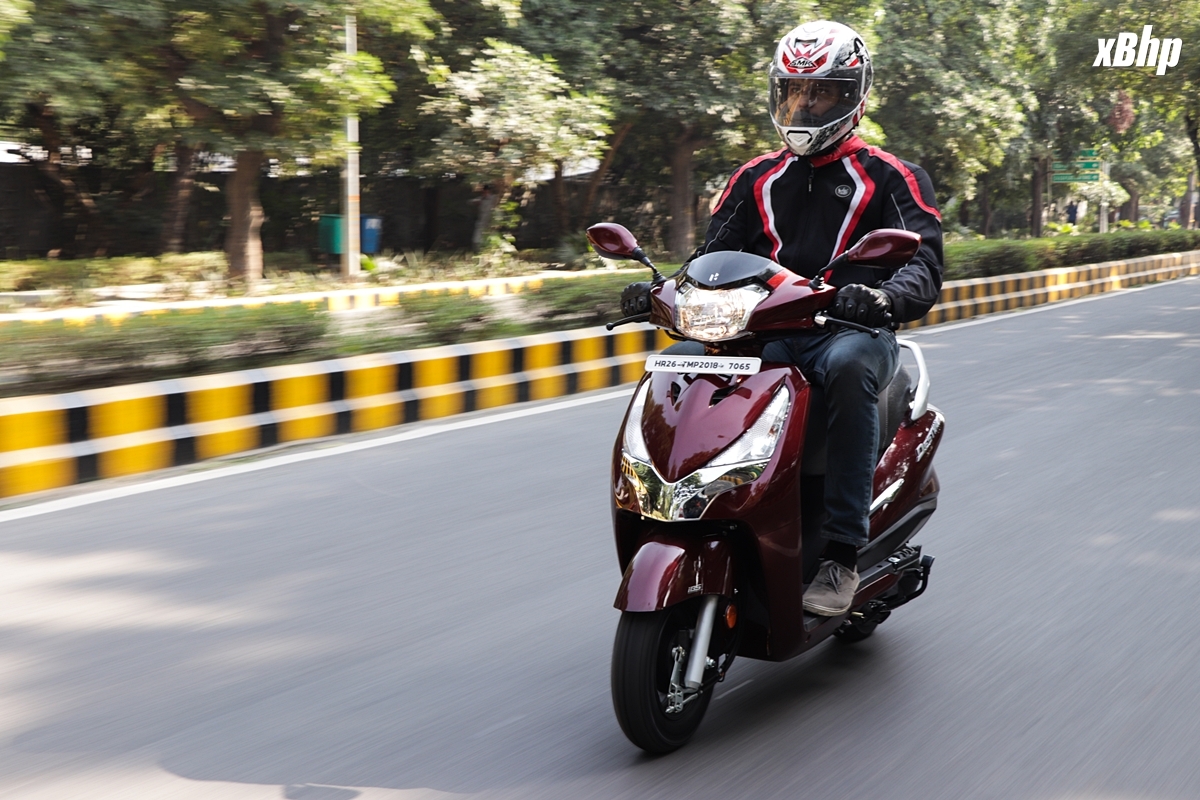 Scooters? It may seem a bit weird but I love motorcycles too much. Why do I say that? Because I feel scooters are somewhat abominations when it comes to two-wheelers. But that’s just my personal point-of-view so no flak, please. The first one I ever rode was the NTorq and I had a change of mind. The light-weight and the rather ample power felt nice. The comfort and ease are also appreciable. So, I found the NTorq to be really good. And thus when we were invited to test ride the Hero Destini 125, I knew that it had to be quite a scooter to share the table with the likes of the established Activa, the handsome Burgman and the deft NTorq. So does it get the reservation or does it just wait in a line outside?

So how does the new Hero Destini 125 look? In every sense of the word, it looks like a scooter. And I am not being negative towards scooters or biased towards motorcycles. It looks like a scooter. It is neither a radical or standout design nor a departure from the Duet-esque design theme. Although there are some bits, like the body-coloured rearview mirrors and the chrome garnishes scattered on the front and sides that are good. The dual-textured seat and the bold taillight are likeable too. The best elements of the design are the cast alloy wheels (only on the VX variant) and the exhaust. The exhaust is a faint reminder of the exhaust on the first Karizmas and the Ninja 250R when looked at from the back of the scooter. Faint, mind you.

Now, performance. How does it perform? It has an air-cooled 124.6cc motor that makes 8.7 Bhp of power and 10.2 Nm of torque, mated to a CVT. I feel the Hero Destini 125 performed decently well in the short stint that we had with it. Power is available right from the start and the scooter pulls effortlessly off the line. It does start to lose some breath when the speedo goes past the 70-75 km/h mark but it still kind of keeps going. So, the performance is not earth-shattering, not like it’s needed in a city-slick scooter, but I am sure the Hero Destini can hang with its counterparts in this department. It can do 75 km/h all day if one is willing to deal with the slight vibrations.

Hero Destini 125 is the first scooter to get the i3S technology. It gets a switch for the same on the right side of the console. What the i3S system does is that it sense if the scooter is idling (for some time), say a red-light on a traffic signal, it switches the engine off and one can restart the engine simply by twisting the throttle while holding the brake. And for those who don’t want this system to do such an ‘environmentally good thing’ for them, it can be switched off using the switch mentioned above. Hero has claimed a real-world mileage figure of 51 km/l and they have attributed some goodness of this number to this system as well. Pretty neat.

How does it handle? Like it was intended too. The handling isn’t very sporty i.e. enough for the targeted audience. It feels very neutral when on the move. The suspension seems tuned well for the streets as it gobbles up the undulations of the road without letting the rider know of them. The rear though is a bit stiff and feels somewhat like ‘instant karma’. The rider is instantly told (sternly) that they should have avoided that pothole. But overall, it’s satisfactory.

At 111 odd kilograms, it is not the lightest scooters around. On paper at least. On the move, it felt very light and I’d even say fun but that fades a bit at higher speeds. It probably has the shortest wheelbase in the segment and that in addition to the soft suspension, make one wish that it was a bit more composed. It weaves and wallows a bit when the stakes are high and so is the speed! But that does not happen in the scooter world. So overall, the handling is good. The brakes felt nice. The lack of disc brakes is compensated by the integrated braking system. Therefore, the scooter has ample stopping power but I would have preferred disc-brakes, at least as an option.

Instrumentation and features. The best thing according to me is the ignition-key. The ignition key switches the scooter on, locks the steering, can release the seat to access the boot, and releases the fuel-lid too! That is smart and really handy. It can even fix what’s wrong with DC, bring Zach Snyder back and save the Avengers! Probably not all that but there is an externally placed fuel-lid so, more goodness there.

The instrument panel is a digital-analogue unit and consists of basic information like fuel-level, trip and odometer. There is a side-stand down indicator which is a welcome addition. The storage under the seat is not enough for a proper full-face helmet, but it gets boot light and mobile charging socket (only on the VX variant though).

Now, there was a slight niggle with the scooter that I got to ride. Apparently, it liked me a bit too much and probably didn’t want me to make the effort of twisting the key to release the seat lock (to access the boot). I just pulled on the seat and voila! Just a glitch, probably.

The verdict eh? It’s a difficult one. The Hero Destini 125 is not an outstanding candidate in its segment. That’s sad. But what’s sad about it, is also the best part. It does not intend to stand out. It has somehow made peace with mediocrity and its content. It is just there to fulfil its duties and that it does satisfactorily. The price is also south of scary places with the LX variant starting at INR 54,650 (Ex-showroom Delhi) and the VX variant at INR 57,500 (Ex-showroom Delhi). So, there isn’t something wrong with Destini (makes one laugh) but should it be the scooter to go for in the 125cc segment? The answer to this question will be reserved until a full-blown road-test.