Rallying has been around for a while and so have motorcycles meant to do that. Initially, these motorcycles were restricted to competition but someone realized that these machines can serve a purpose on the road as well. This is what led to the plethora of adventure touring motorcycles that we see in the market today. And one of those adventure tourers is the Honda Africa Twin.

We recently got to swing a leg over it and while we have ridden one before as well, it was still just as refreshing to put Honda’s rally prowess to test. Before that, we want to get something out of the way. The Honda Africa Twin is a simple motorcycle. No frills, not a lot of bells and whistles and in terms of numbers too, it is pretty ordinary. But there’s a catch here. With its first Africa Twin, Honda focused on making it a very usable and very approachable motorcycle. You see, when Honda wants something to work a certain way, it does that. In cars, the NSX did that. In road bikes, who can forget the CB750. In WSBK, it is the CBR1000RR-R now. And in MotoGP, we all know what the RC123V is capable of when a certain Stoner or Marquez tames it. So, if they want something to work, it does. The Honda Africa Twin did that too. Those who are acquainted with rallies and offroading know all about Honda’s Africa Twin that first debuted in 1988. It was a hit and continues to be a great adventure tourer. But it has been a long time since then and one tends to think that it is showing its age now. But one ride and it blows those ideas away. 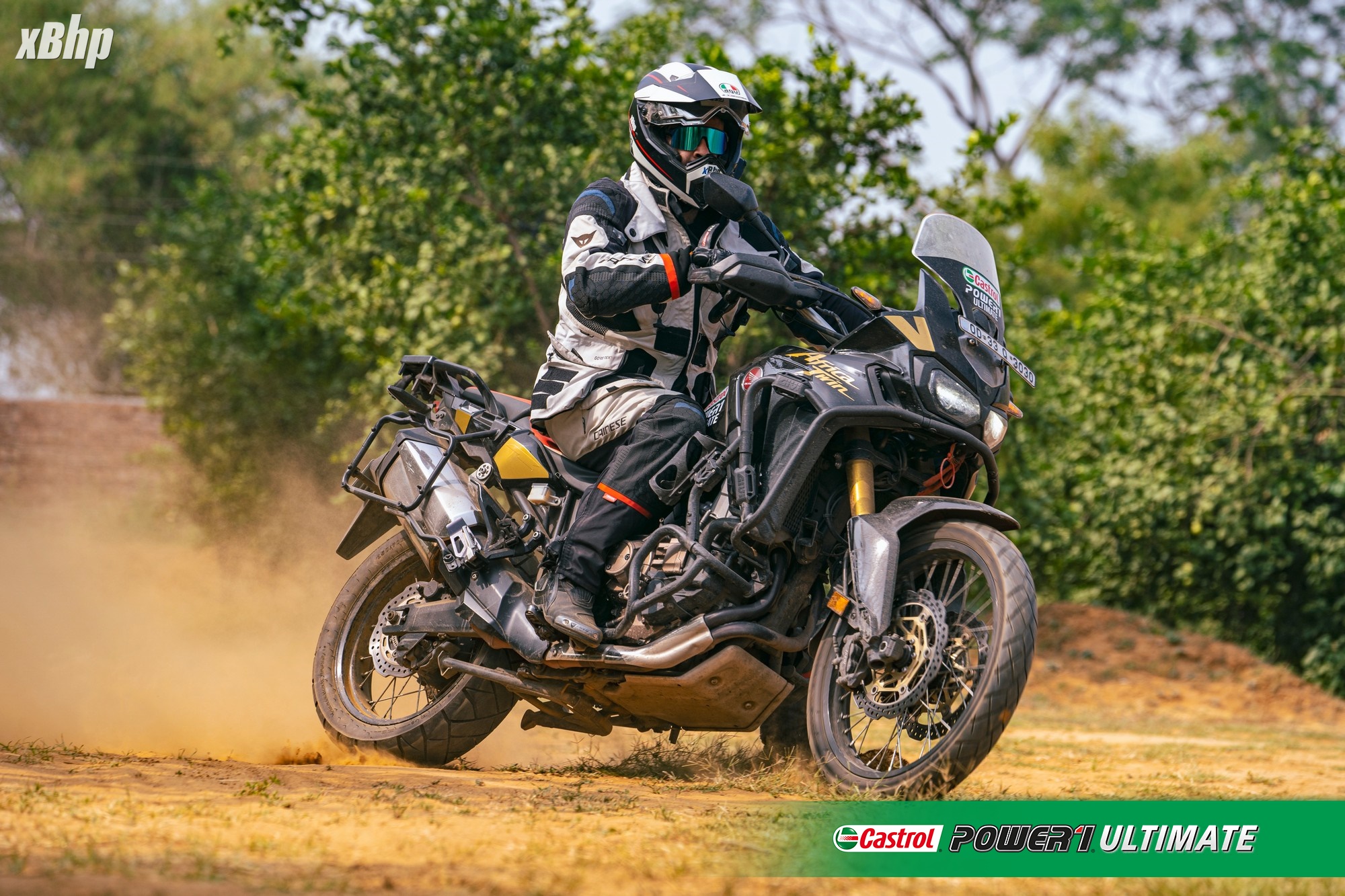 Coming to our experience with it; the one we got to test out belongs to Bulu Biker. He was here for a session of #MotoGrapherTalks. Since we were at the Throttle Shrottle Moto Ranch, Bulu’s offer to give his pride and joy a shot was too much to resist. As mentioned earlier, numbers are not the Africa Twin’s strong point. 94 bhp of power and 98 Nm of torque seem almost inadequate in a world where even tourers are inching closer to 200 bhp! Then there’s the transmission. Bulu’s Africa Twin is a DCT (Dual-Clutch Automatic) version and that further puts some purists off. It does that even if the same purists can’t argue against its advantages. Despite all that, it simply works. The Africa Twin was always about functionality and that it has in spades. When looked upon closely, it is a very clever motorcycle too. So, without further ado, let us talk about it. In terms of performance, Honda’s 998cc parallel-twin motor is a gem. It is extremely refined and progressive. The power delivery is so sedate and linear that even a novice can get used to it within no time. There are no surprises anywhere in the rev range, only Godlike smoothness. The DCT works wonders on the roads be it cruising on the open roads or battling urban traffic. A major aspect of the Africa Twin’s ease of riding is the weight. This big-bad ADV feels featherlight thanks to the clever geometry and weight distribution. Despite riding high and the perch being further up, the centre-of-gravity feels nice and low. This means the Africa Twin feels planted whether there’s smooth tarmac under the tyres or the dirt and rubble of a trail. Another thing we loved about the Africa Twin is that it is nice and narrow. Because of that, it is easy to be sure-footed while on a standstill despite its high saddle height. The suspension is very well sorted for road riding as the Africa Twin can ride steady on the highways with triple-digit cruising being a piece of cake.

The suspension is pliant enough, even on bad roads, to make the Africa Twin feel like it glides over any bumps or undulations. The slight compromise made here is in cornering where it does not feel as confident as some others but then again, the others do not deal with bad roads as efficiently either. On the ergonomics front, the wide handlebars lend the rider a generous amount of leverage over a bike that is so lightweight. Then the seat is well padded too and the overall riding triangle is meant for touring all day long. Since the handlebars are higher up, the ergonomics work well off the road too.

Talking about off the road, well, the Africa Twin is a delight. Jumps and slides, climbs and descents, rocks and ruts, dirt and gravel- it is purpose-built to conquer all of that without breaking a sweat. The Africa Twin is a motorcycle that at no point feels unsettled or out of breath or trying too hard. It likes to go easy and deal with the toughest of terrains doing just that… going easy. After some time well spent with it, we also talked to Bulu about his experience with the Africa Twin. And as predicted, he was all praises. Living with it and travelling with it, Bulu has come to love the Africa Twin quite a bit. And if the bike itself did not impress him enough, adding Castrol POWER1 ULTIMATE to it made him fall head over heels in love with it.

We also concurred because we could tell how smooth the engine felt. Even after all the bashing and beating it took around the trails of Throttle Shrottle Moto Ranch, it still felt alive and was ready for more. It is down to Castrol POWER1 ULTIMATE’s Full-Synthetic technology but the crown jewel is the 5-in1 formula. With the Africa Twin, we could feel the advantages Castrol POWER1 ULTIMATE offered especially when you really push the motorcycle offroad and high-revs and slides are your best friends. All in all, the Africa Twin still feels like a very relevant motorcycle that can serve as your daily driver, your touring partner, and be there for you if you’re looking for some action off the road. And being powered by Castrol POWER1 ULTIMATE helps it further its cause.