When the #powerTrip360 was still at the drawing board, one of our biggest concern was the luggage space, or the lack of it.  Also, the motorcycles that we are riding, Ninja H2 & Ducati 1299 Panigale, are not exactly known to be a roadtripper’s delight for similar reasons. So one of the major link in this whole sequence was going to be the backpack which we would carrying. It had to be something lightweight, weatherproof and above all sturdy enough to protect our expensive camera gear and laptop. And also look good while at it to match with the overall imagery of this roadtrip.

So after thorough research on this subject matter we ended up contacting Point65 Sweden  who make the Boblbee range of hard shell backpacks that are used not just by motorcyclists but by people from various other adventure sports such as skiing, hiking, cycling, etc. The Boblbee was designed by an industrial designer Jonas Blanking who was an outdoor guy himself and his quest to find a truly weatherproof and sturdy backpack led to the creation of various hard shell bag prototypes by him in 1996. However, it took 2 years before the design of Boblbee monocoque hard shell backpack was finalized and it went on to be known as Megalpolis.  This backpack soon became a huge hit not just among the adventure sport lovers but also by people involved in some other outdoor activities such as DJs, courier guys, and motorcyclists. Their products are especially popular in Japan.

The company was later bought by Point 65 Sweden and sells it products now branded as Point 65. So the Point 65 Sweden guys sent us their flagship Boblbee GTX 25 L with Chrome hard shell, which goes perfectly well with the Ninja H2, and also a red GTX 20 L along with their super lightweight backpack Amphib along with a bunch of other accessories and add-ons. As the name suggests, the GTX 25 L has the capacity of 25 L and is a hard shell monocoque backpack. It is the 2016 update design of  their iconic Megalpolis model The hard shell is available in a range of colors to match your ride/personality, and some of its features are as listed below: We have also a red color 20 L version of the above model called the Boblbee GTX 20L and it is pretty much the same as its 25 L sibling except for a few changes, most notable of it being the difference in volume. As we said earlier, there is a range of accessories/add-ons available for these bags to bump up the overall capacity. These accessories are mainly various size pockets/bags that fit onto the main bag externally. Among these accessories that we have is Sidewinders and X-Case Medium along with the velcro waist belt and phone pouch.

Lastly, we also have their Amphib backpack, which is a very compact and ultra lightweight backpack which has got a water tight roll top.

One of the major and most unexpected advantage of these Boblbee backpacks is the spine protection. So Boblbee claims that what you get along with the backpack is the 93% impact reduction with CE level 2 spine protectors, which is the highest level of spine protection you can get. So here’s a big thank you to the Point 65 guys for sending us some of the best motorcycle backpacks for the #powerTrip360.

Oh! and in case you are a movie buff, you’ll be happy to know that Boblbee backpacks have been featured in movies like The Fast and the Furious, Charlie’s Angels, Hitch, Jason X, & The Italian Job, etc.! 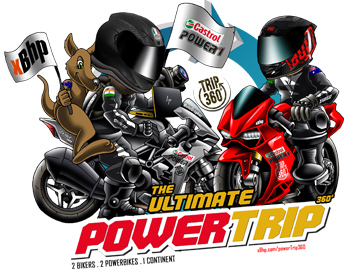