How would a retired defence personnel remember his time at the service? A likely answer is by recalling various accomplishments he had achieved and the battles that he and his team might have fought and won. See all used Harley-Davidson’s listed on OLX for sale and you might find an interesting deal that fits your budget. But remembering is one thing and giving a fitting tribute is another. It can get emotional for anyone to carry out an act that shows gratitude, respect and admiration towards a human or an institution that has played a significant role in one’s life. And for a man who has served his country in one of the best possible manners, it becomes all the more special. 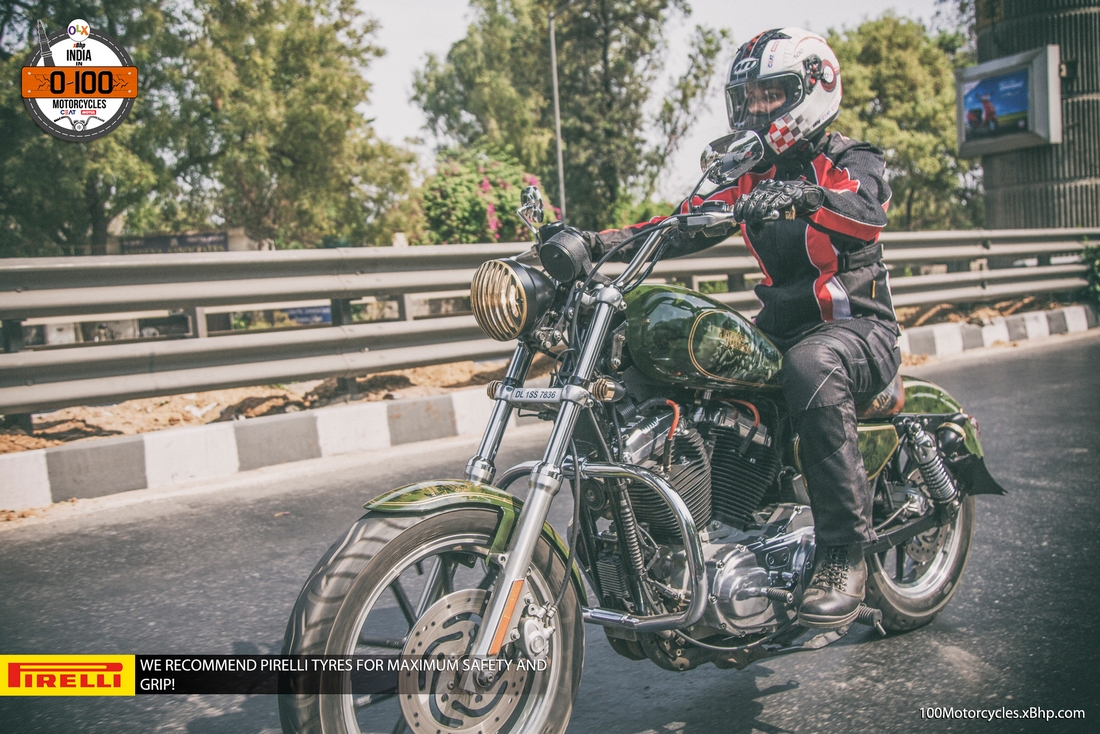 So, in an attempt to understand the same, we met Retired Colonel Vivek Chaddha and talked to him about the very special tribute that he has given to his battalion. Colonel Vivek Chaddha took retirement from the Indian Army in 2011 and then assigned himself with a mission to celebrate his years in the service. And what a way to do it, he customized his motorcycle to reflect some key moments and accomplishments of his regiment. 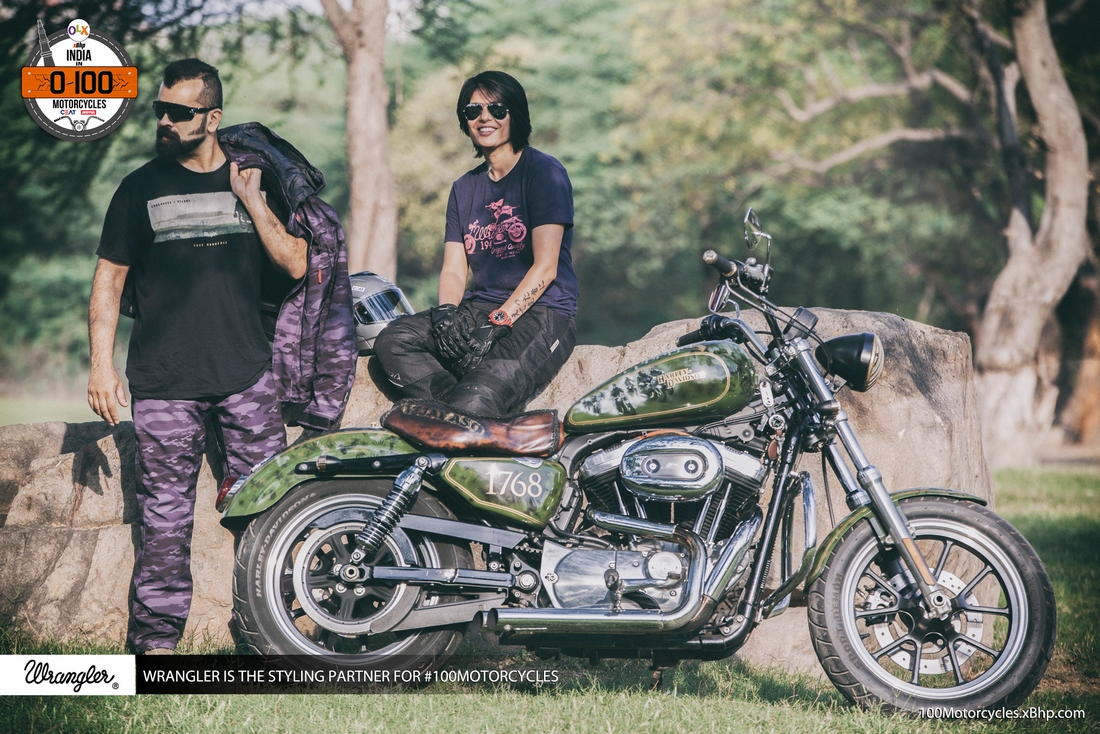 Introducing the Jangi Paltan Harley Davidson Colonel Chadha bought a Harley Davidson Superlow sometime in October 2012 and recently had the 1200cc kit installed into it. However, soon after he bought the bike, he decided to get a custom paint job done on it that would revolve around his battalion in the Maratha Regiment. 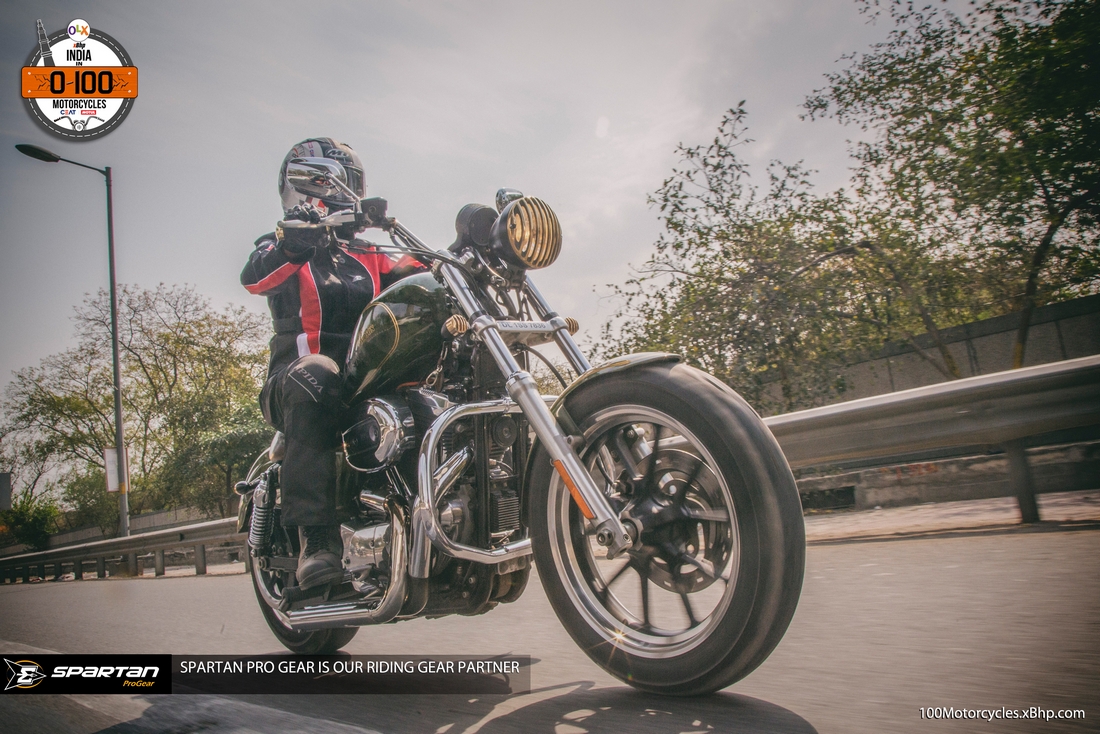 The battalion that he was a part of was formed way back in 1768 and that makes it nearly 250 years old. It started as the 2nd Bombay Sepoys which was changed to 3rd Regiment of Bombay Native in 1781 and to 3rd Bombay Light Infantry in 1901. All this is beautifully highlighted on the front fender using the Crests that are usually present on the badge of a soldier’s cap. All graphics and text on the motorcycle are on the backdrop of the typical army green colour. The fuel tank is dominated by a soldier and the world map and within them are pointed various locations in the world where the battalion had fought battles over the years. There are total 21 battles mentioned on the world map from places as far as Iraq and East Pakistan (now Bangladesh). On the right side of the fuel tank are the dispatch soldiers who rode motorcycles in the fiercest life threatening situations while on the left side there’s a graphic description of a scene from the Battle of Stalingrad during the World War II. The fuel cap is an aftermarket fitment as well and has a compass imprinted on it. 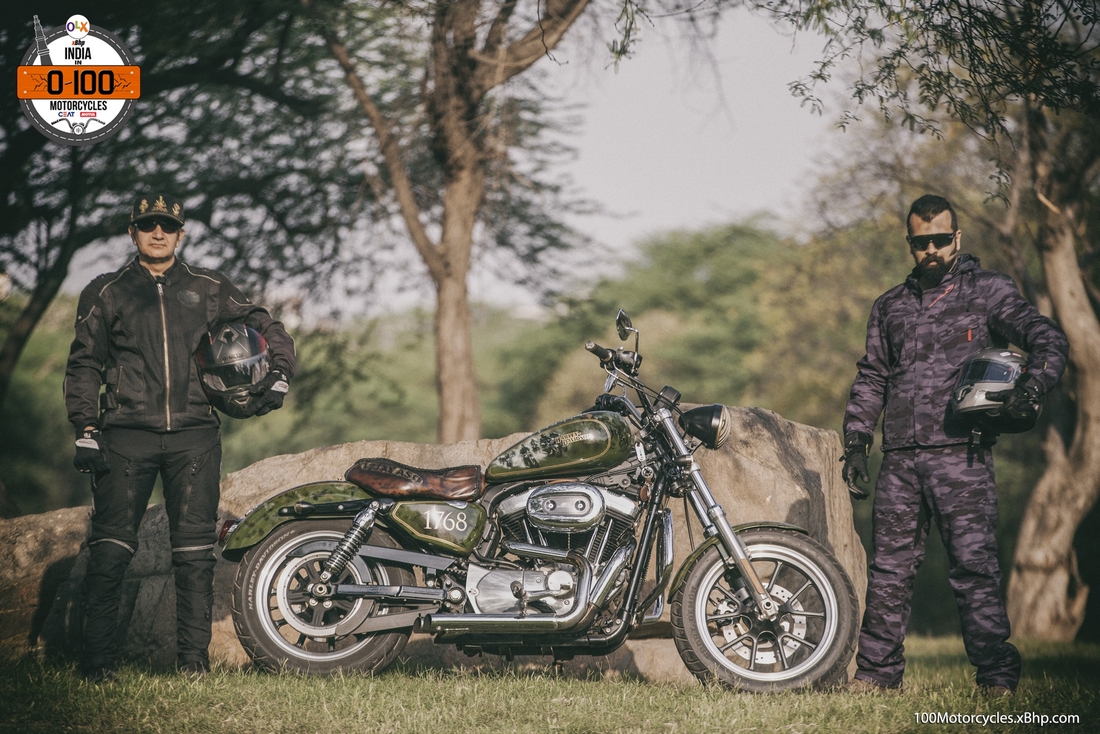 ? All photos on this article that were shot by xBhp were shot on Pentax K-1 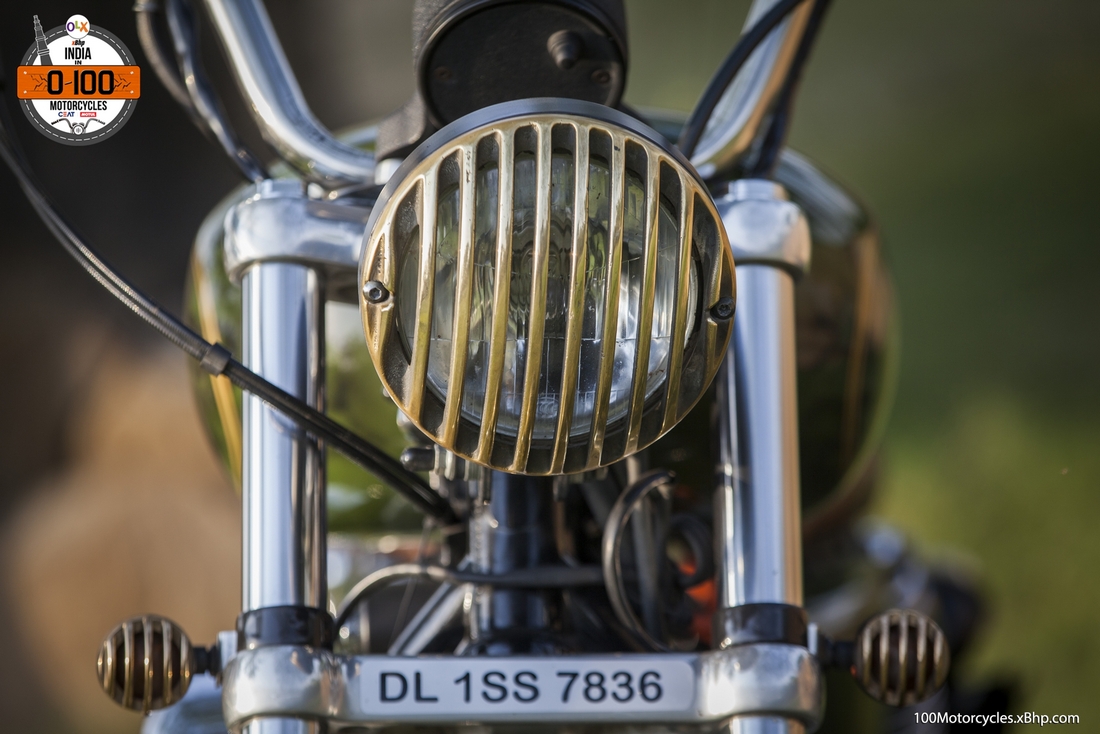 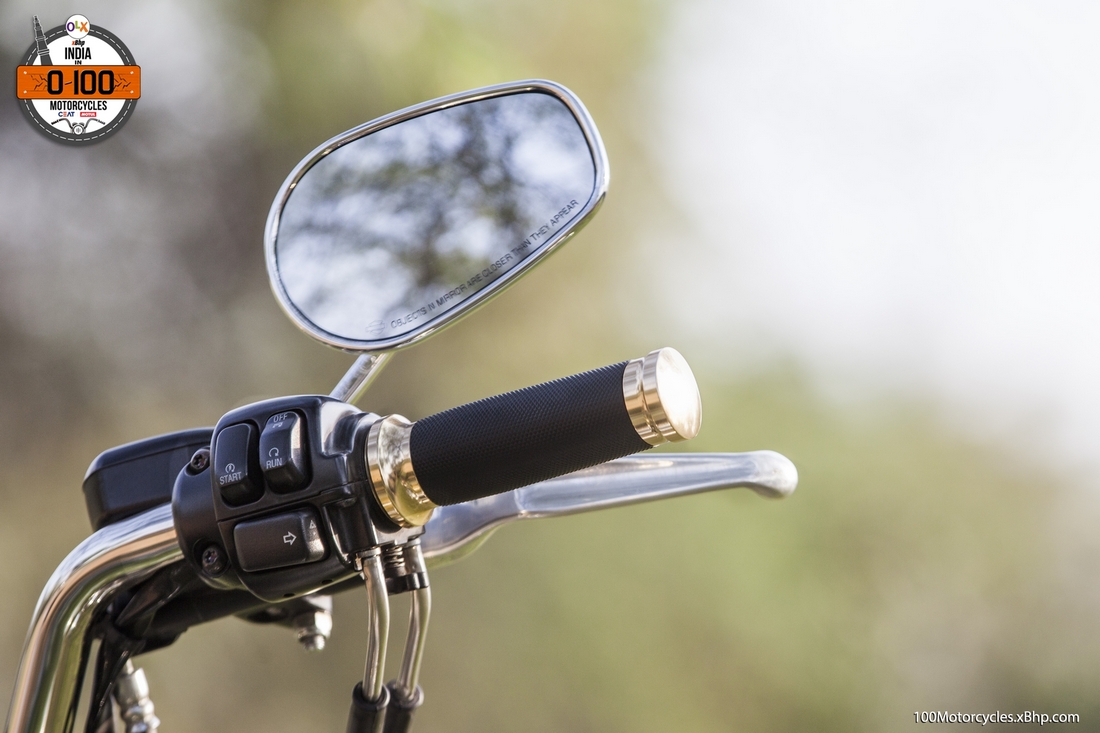 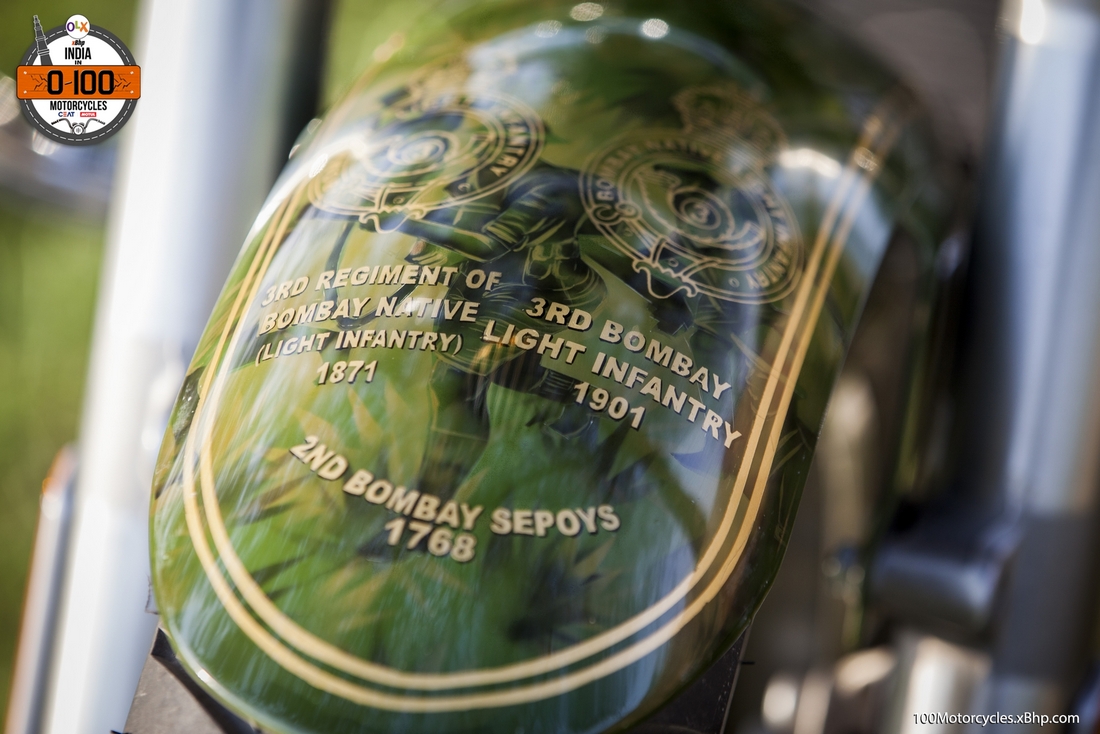 The rider seat is also part of this unique customization. It features an image of the Junior Commissioned Officer from the time of WWII and in the background, there’s the Shivneri temple which is said to be the birthplace of Lord Shiva. Both sides of the seat and its back are stitched with “Jangi Paltan Cha Vijayaso” which means that Jangi Paltan should be victorious. Colonel Chadha told us that this slogan is shouted during battles and in sports. 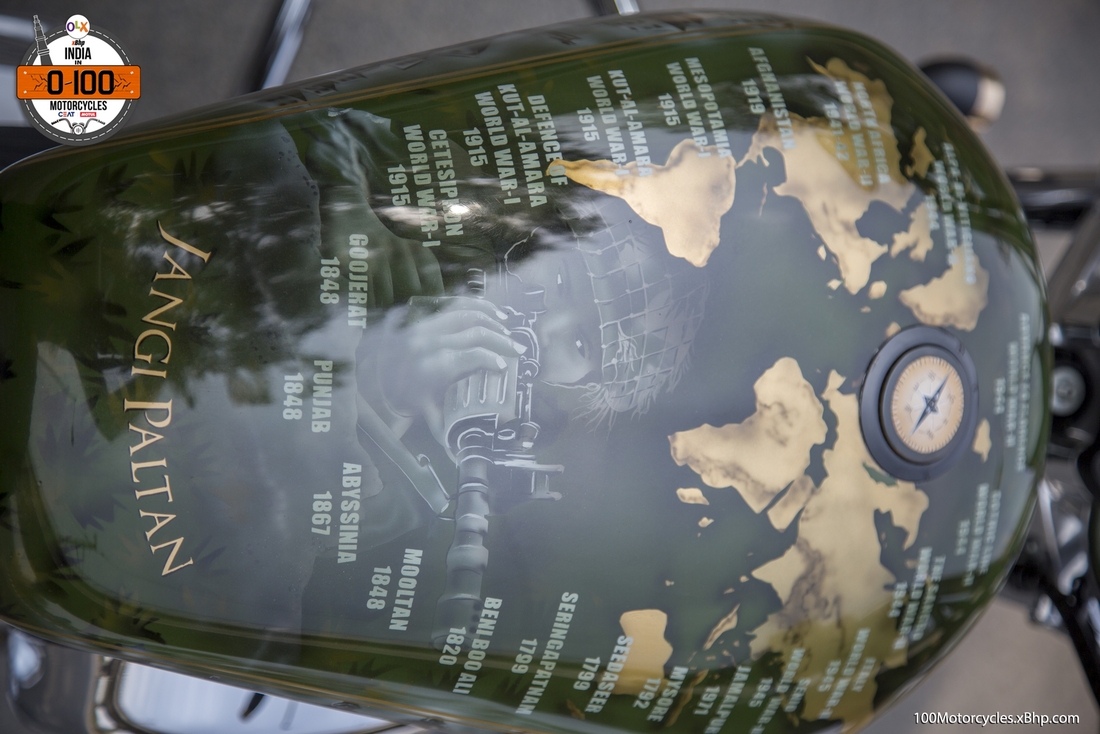 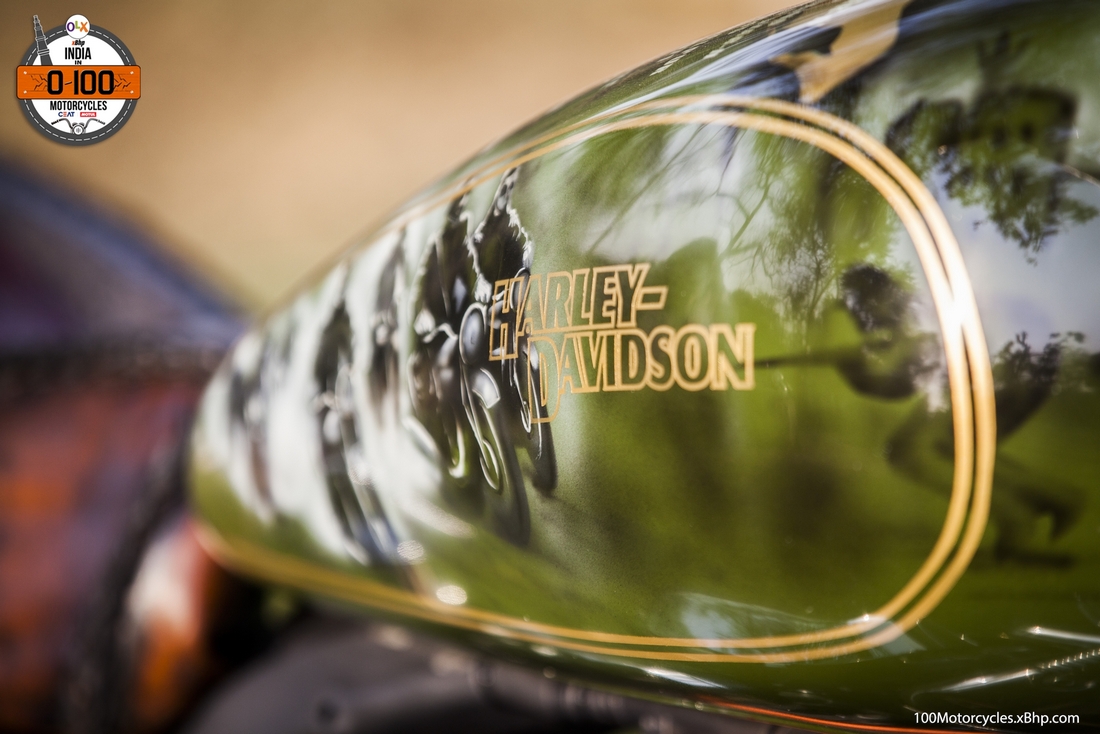 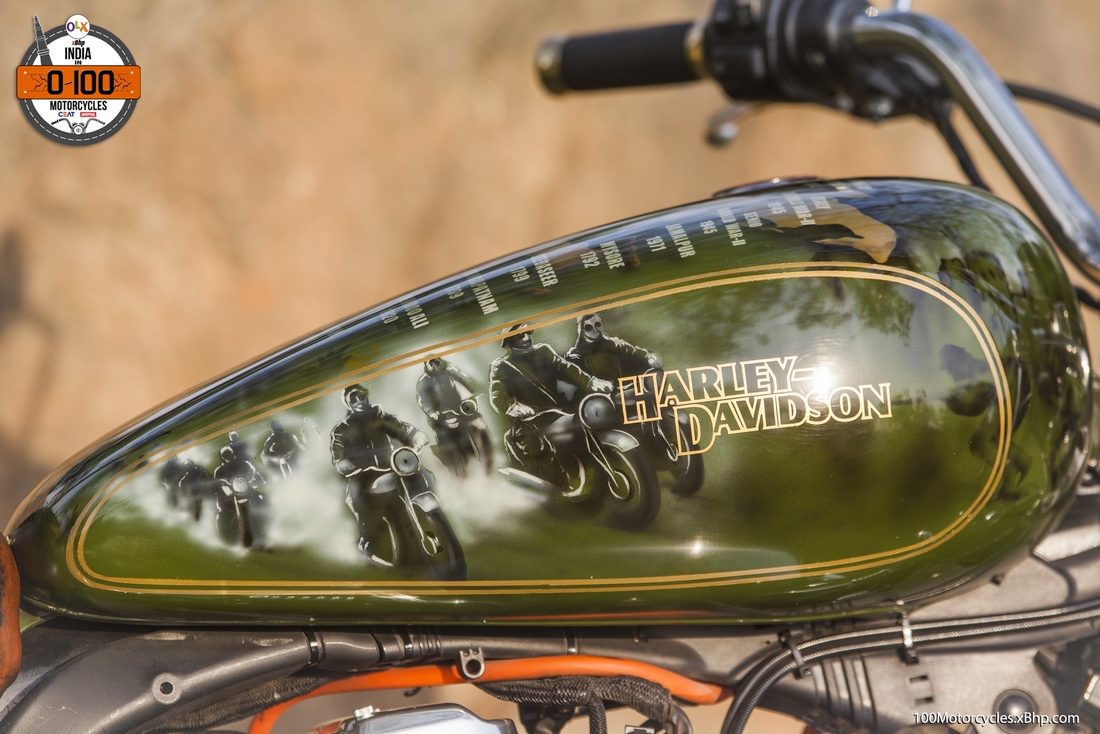 And this is one of the highest points of his battalion as they were honoured with the title ‘Jangi Paltan’ in 1788. Such titles signify the exemplary record of battalions and regiments in various battles. 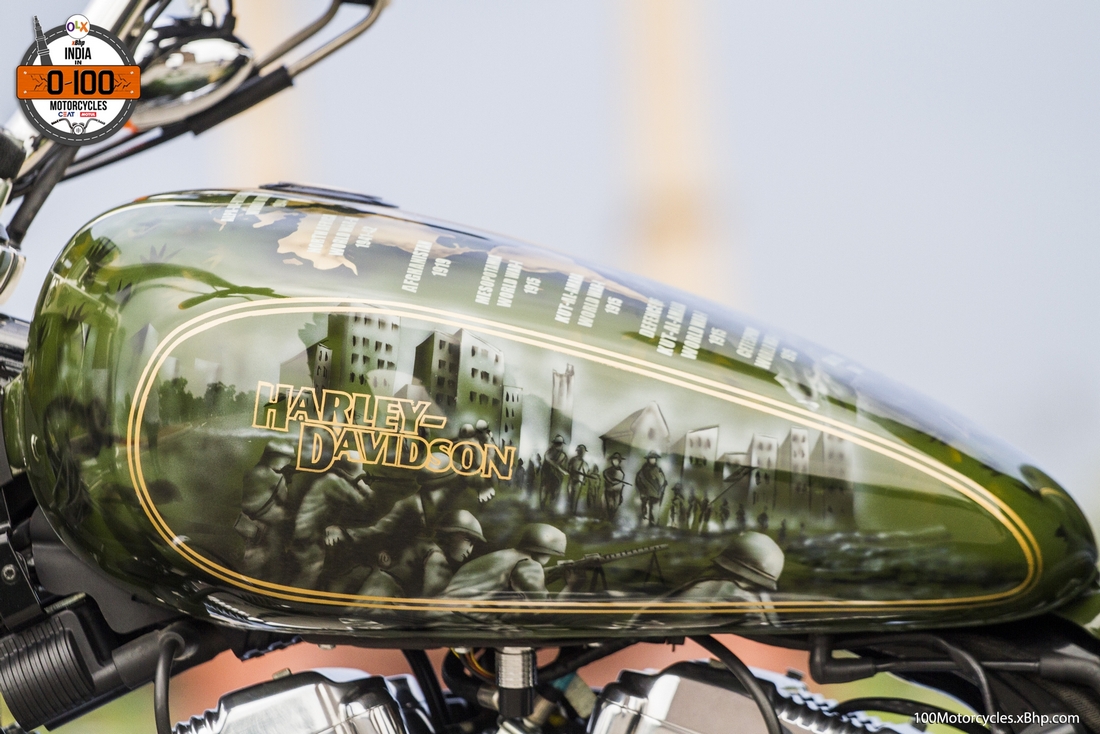 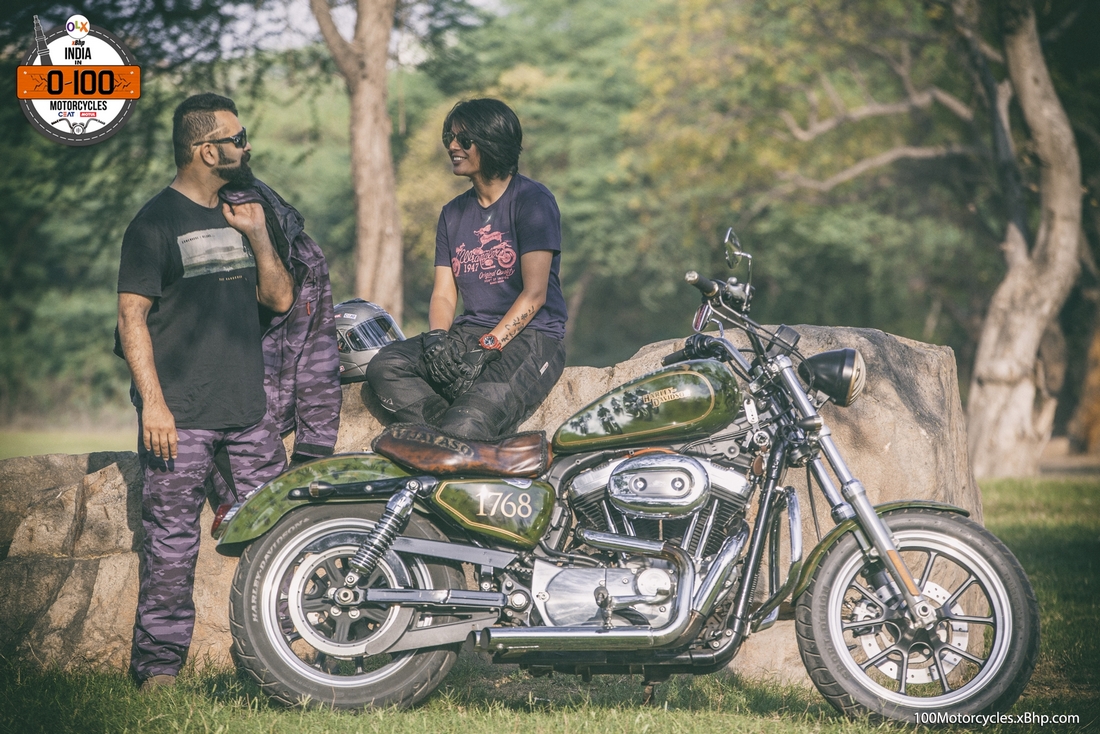 An Overwhelming Experience Motorcycles and patriotism may not relate to each other directly, but this certain two-wheeler has played a major role in times of such crisis. From being an extremely mobile transportation vehicle to delivering critical messages and orders across different locations, motorcycles have been an integral part of the functioning of armed forces around the world. 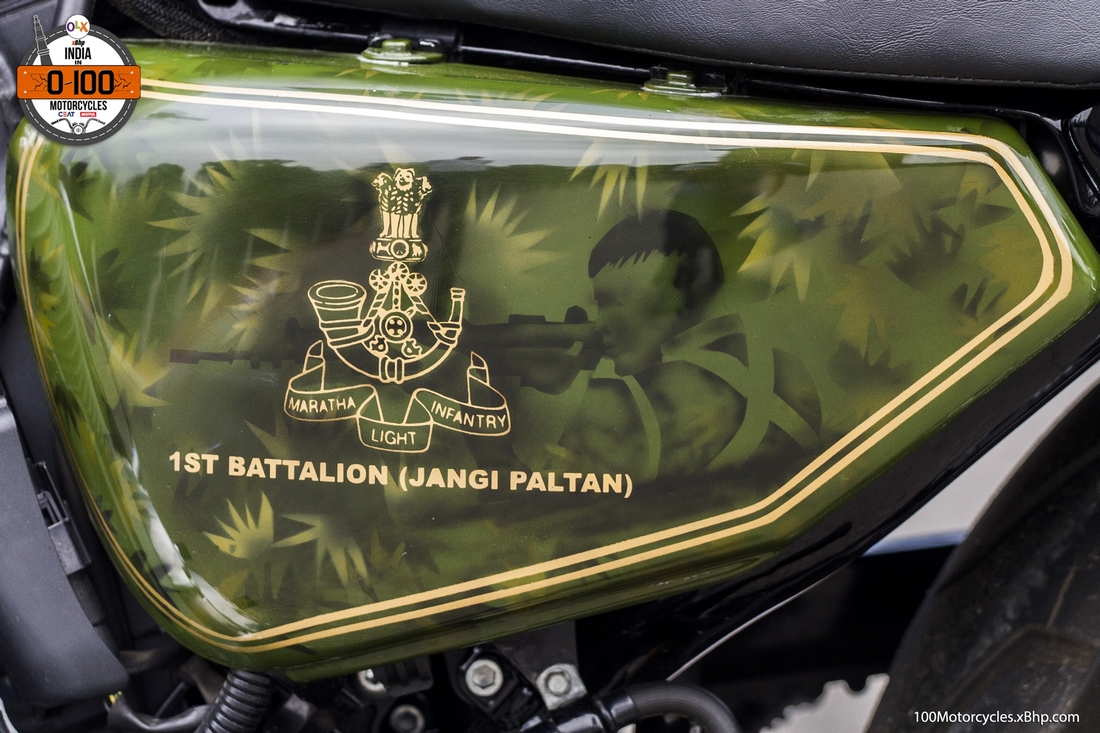 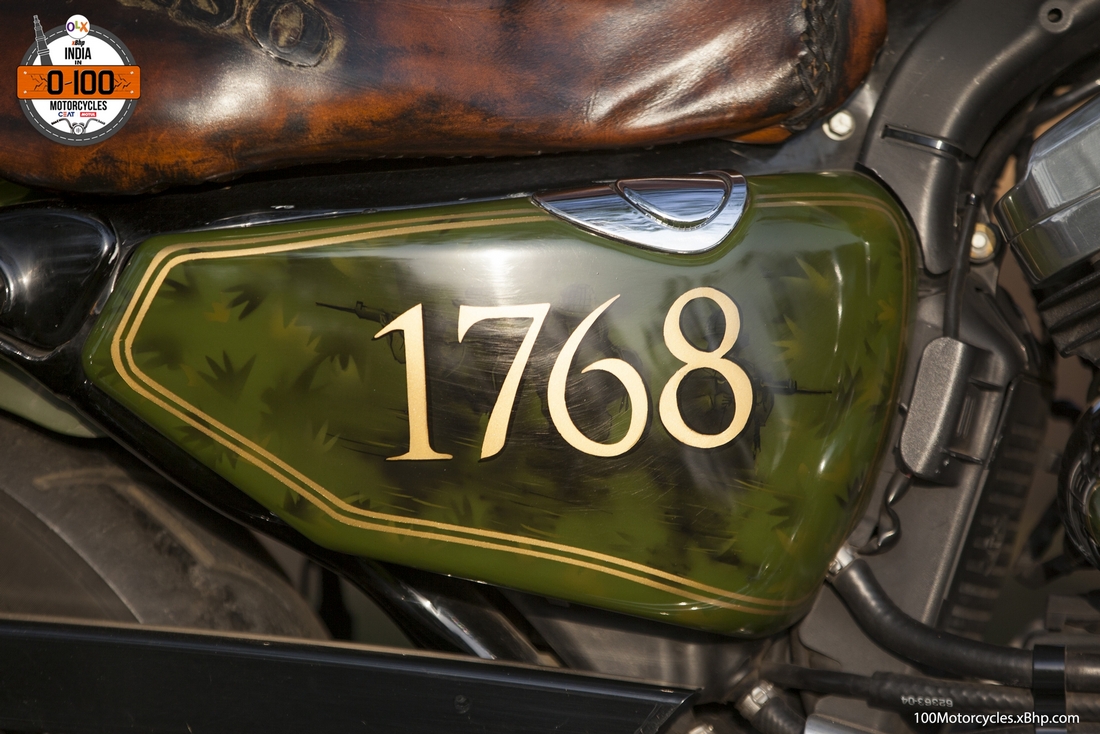 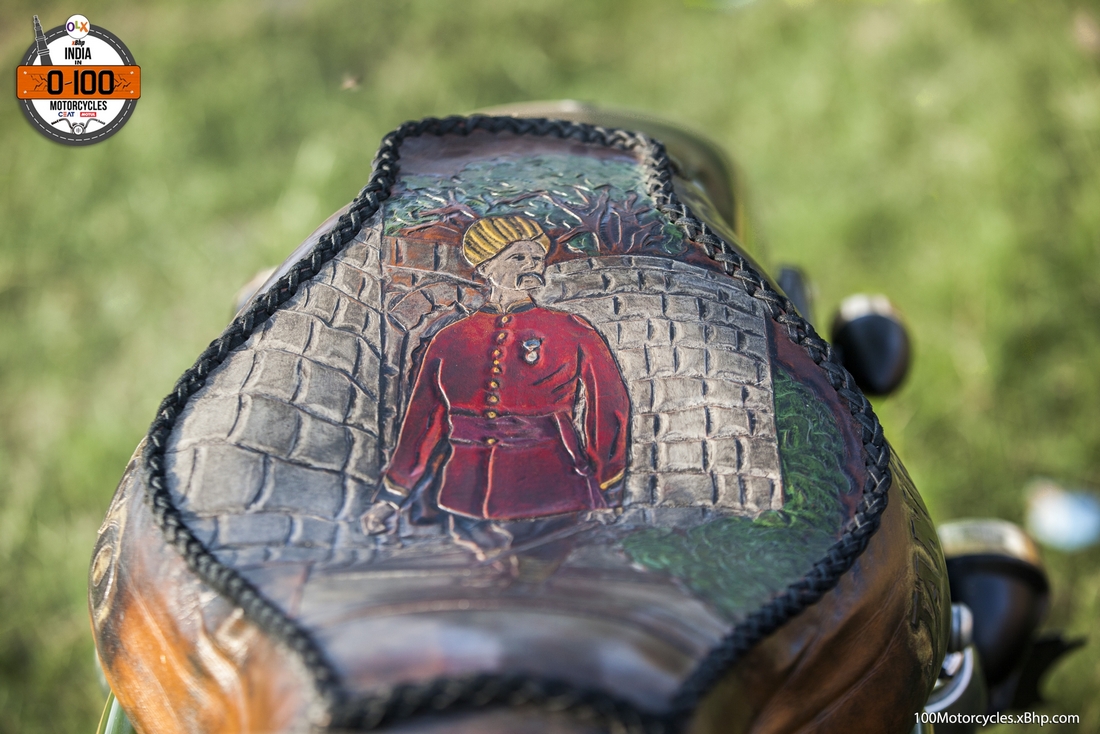 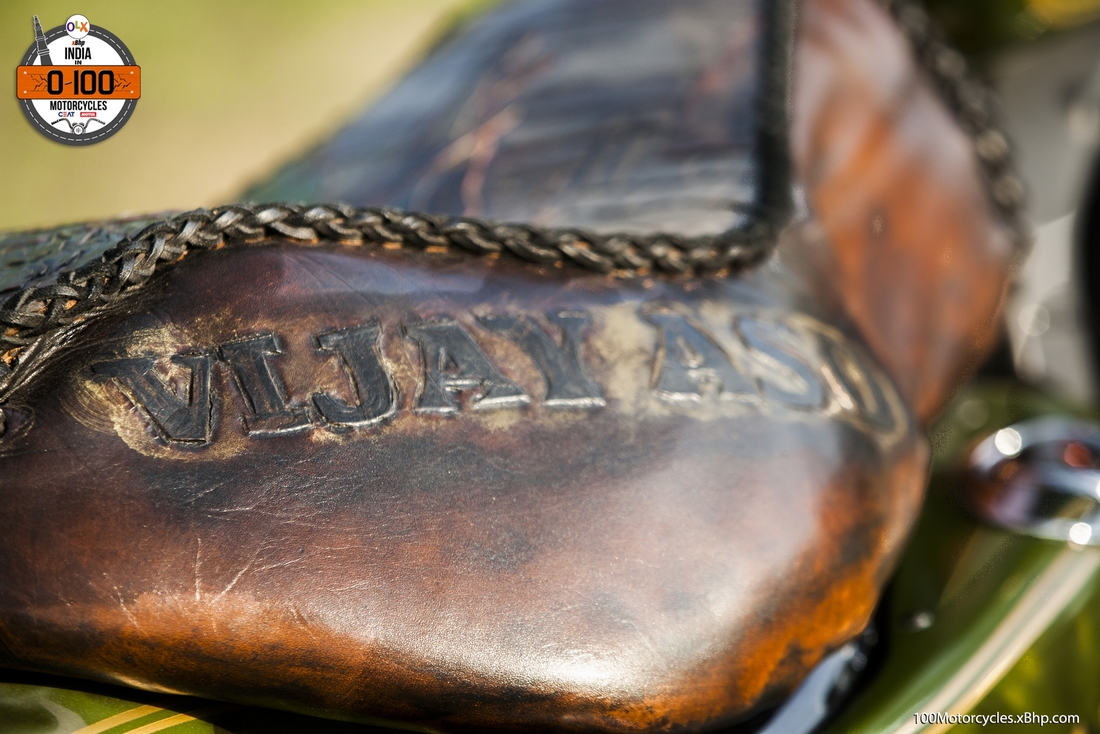 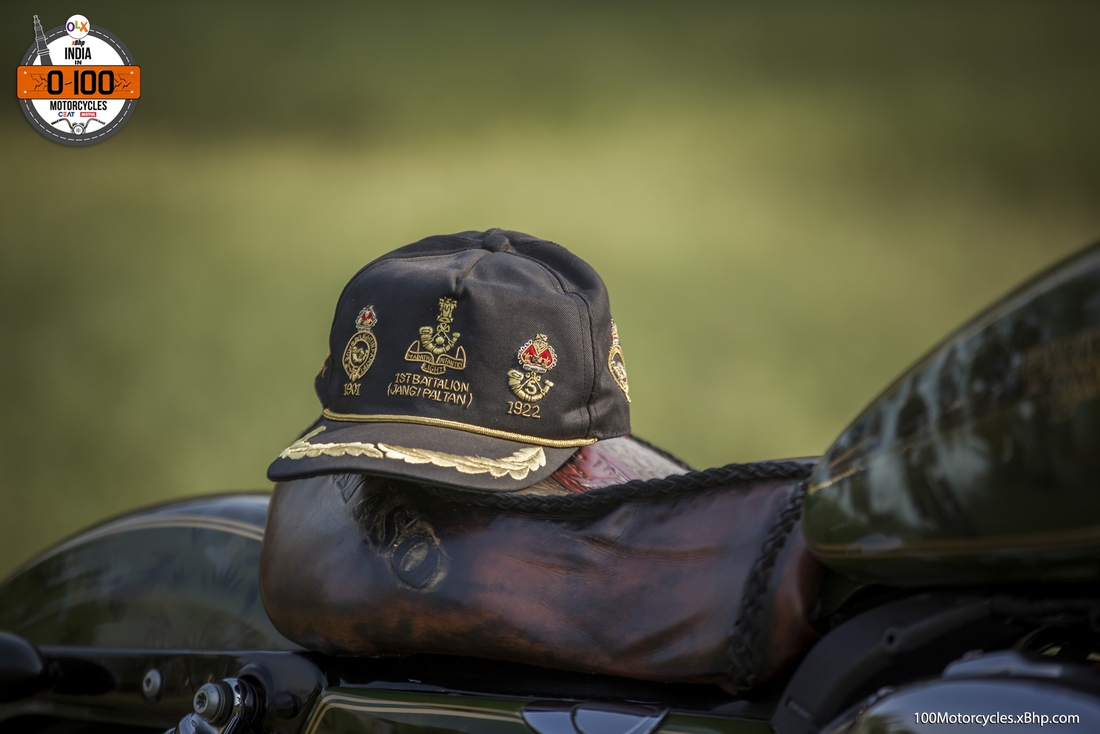 While this is not about classic motorcycles used in wars and battles, it is about a certain Gentleman and his ride through which he intends to not just remember and be thankful to his Regiment, but also tell the people about it. Given that this particular motorcycle is personalized, it is unique and can’t be found anywhere other than where it belongs – with its owner. You will not find it on OLX either, however, you can try and get your own motorcycle customized to reflect your personality. 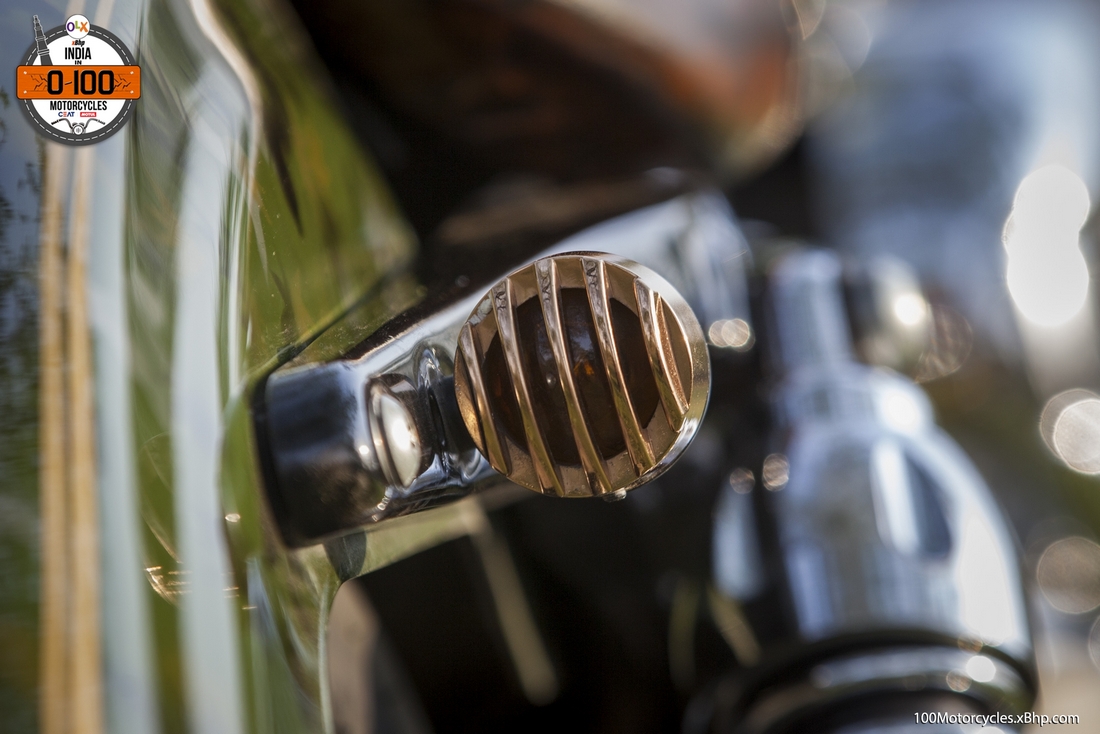 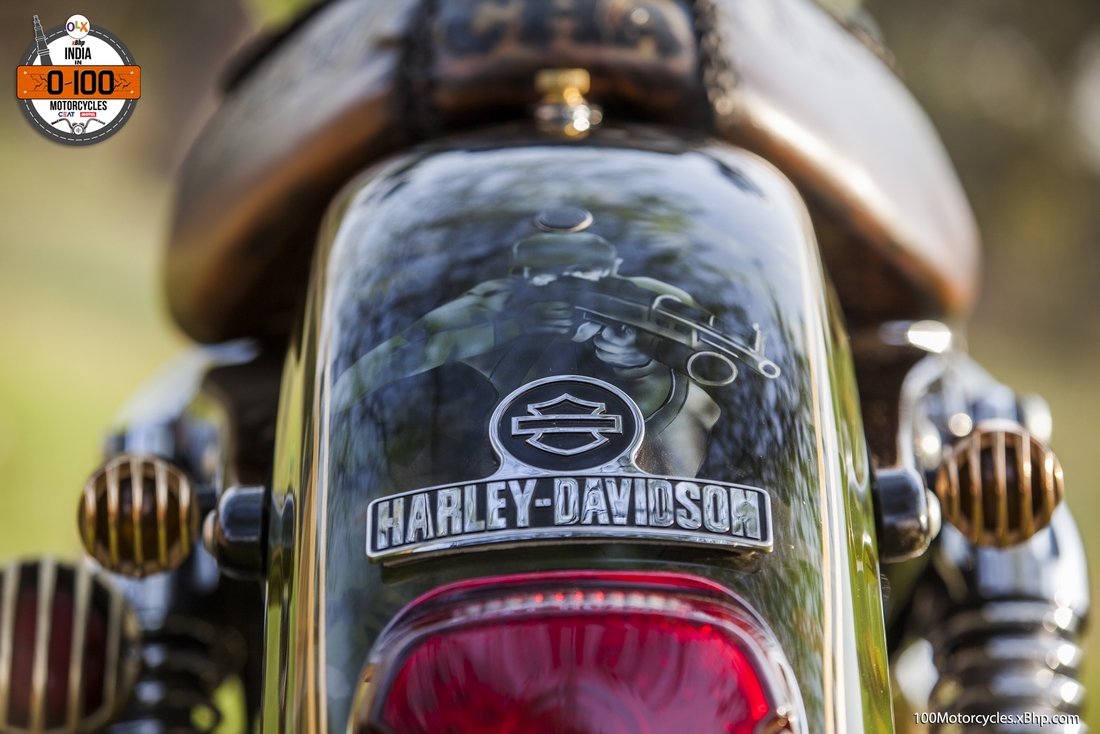 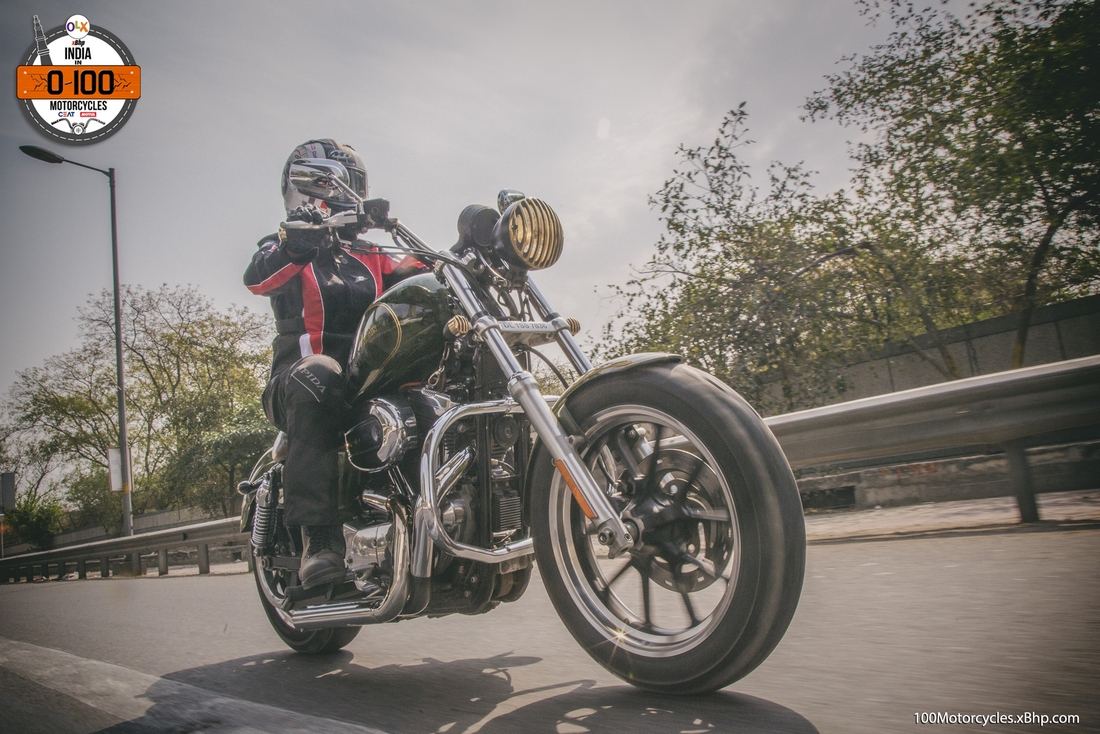 We are grateful to Colonel Vivek Chadha for taking out his time and sharing with us some truly inspiring moments from his life and career. And he did it in a way that touched the deepest corners of our hearts.
tags
Harley Davidson
Indian Army
Iron883
Jangi Paltan
Sportster
Superow
Share this article