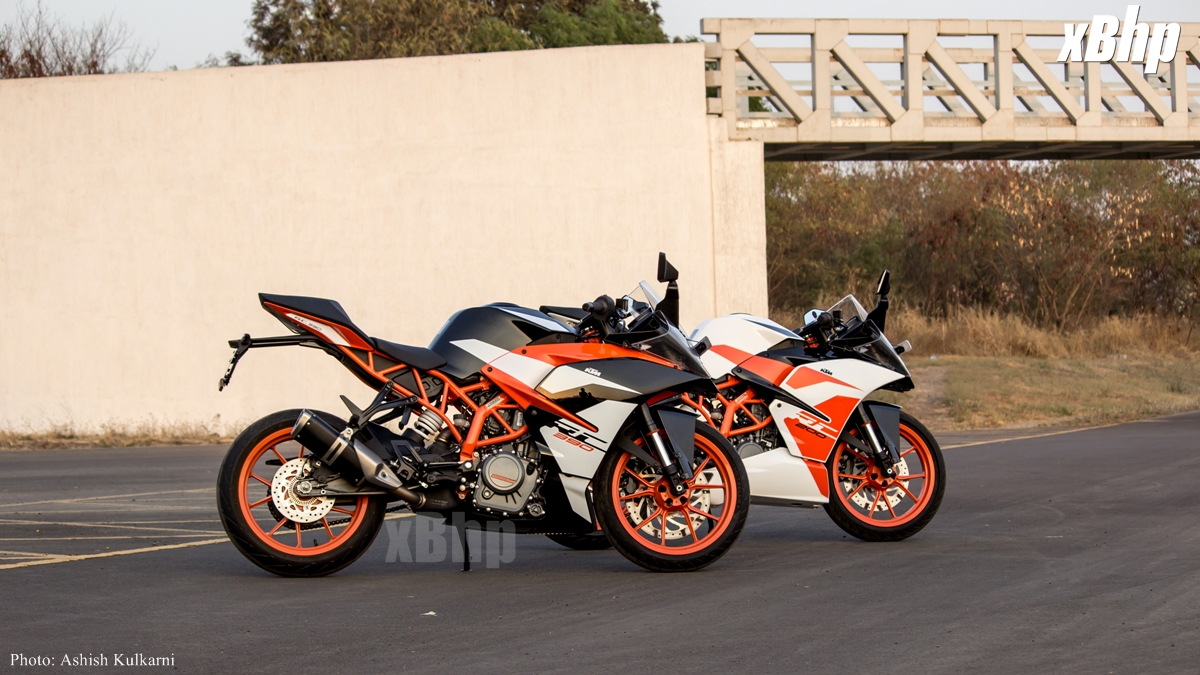 In 2014, xBhp had ridden the KTM RC 390 and 200, the first proper sportbikes in the country. Bikes which were completely at home on the track. They were a bargain at the price point and gave enthusiasts a very different tool to play with! It was however time for the Austrian manufacturer to up the ante and ensure the new bike is fully loaded for the track, straight out of the factory!

The 2017 bikes are an evolution of the original, a lot has changed in the RC 390, but the base motorcycle is the same at the heart of it. The bike feels familiar, for better or worse. We therefore will concentrate our attention on the differences and not the similarities!

First up is the new paint scheme, the one thing that is in your face. As always, whenever there is a change in the paint scheme of a motorcycle, there will be the critics who feel the older looked better, while others will welcome the change. So is the case with the 2017 RC twins. The important thing though is that the bike looks different from its predecessor. Besides the change in graphics, visually you will notice the substantially larger RVMs. Which is a wonderful practical addition to the bike. The new side-mounted exhaust, this was required to meet Euro IV emission norms, frees up room from the belly, thus allowing the bottom of the fairing to be made narrower. This mitigates the problem of the fairing grinding in the corners, a problem faced by some of the seasoned track riders. The new exhaust also has a better note, pleasantly different from the outgoing model! Another change is an addition of 12mm of foam to the rider’s saddle. This was an addition which I didn’t like, though I assume most riders would be happy to have that extra bit of padding.

The important updates though, are not visible to the eye. Ride-by-wire (RBW) is one of the biggest technology additions to the new RC. What’s that you ask? Basically, the traditional mechanical throttle cable is replaced with an electronic wire. So when you twist that right wrist, a cable isn’t pulling through, instead 1s and 0s are being sent to a little black box, where an IT engineer is sitting with his laptop, giving commands as to how much the valves should open and allow the air to be let in and burnt! So in the real world does this translate to a disconnect between the rider and the engine? Not really, in fact the throttle response only gets crisper and more precise. Technology like RBW, can even change the mind of old-school purists with the many advantages they offer!

The other big ticket update that the bike got was the addition of a slipper clutch. A slipper clutch helps in downshifting, especially on a track. When you downshift at high RPM, there is a difference between the engine speed and the rear tyre speed as the lower gear is engaged. This difference in speed causes the rear wheel to lose traction and skip out. Very unnerving when the rider is focussing on braking for that next corner. The old school method is to blip the throttle while downshifting so as to match the revs of the engine to the speed of the tyre. Now this job is done by the slipper clutch, which does exactly what its name suggests. It slips the clutch if the wheel speed is more than the engine speed, till the speeds are similar, where the clutch once again engages. How useful is this in real world riding conditions? Honestly, you rarely ever will find yourself hammering down through the gears while riding on public roads. The biggest benefit as per me is mid-corner. When you find yourself one gear too high in the corner while leaned over, you can easily downshift and still hold your line. Without the slipper clutch, a downshift would most probably throw you off-line. That itself is worth the extra monies you pay for it!

The other notable change is the downgraded speed rating for the Metzeler rubber that the RC 390 now sports. Though it still is comfortably capable of handling the top speeds that the RC is capable of managing. On the 1 km long straight, I managed to hit 160 kmph on the speedo, well below the 210 kmph that the tyres are rated for. And to bring you back to reality in a hurry, KTM has popped in 20mm larger discs, with the bike now sporting a 320mm disc up front. A very welcome addition, which now gives the bike the same kind of urgency in braking as it possesses in the handling and acceleration department. Other improvements we found on the bike were a super smooth gearbox, and this was at the end of the day after a bunch of media people had already spent the day thrashing the bikes around the Chakan track, and a bike which started on the first touch of the starter button. The KTMs no longer a 3 second bike, a 3 second to start bike, that is!

Which brings us to the younger sibling, the RC 200. The 200 also gets a new livery and a BS IV compliant engine, along with the wider mirrors. But overall, the bike is essentially the same as the 2016 version. As such it sat in a corner of the track moping, since no one was willing to give it any attention! Previously I had held the belief that the only reason to buy the RC 200 was because one couldn’t afford the RC 390! After a couple of laps on the Chakan track, I am not so sure anymore. The 200 is substantially lighter than the 390 and isn’t quite as front heavy, translating into a radically easier bike to navigate around the tighter sections of the track. I was much faster on the 200 as compared to the 390 on the tighter bits. The only negatives I found on the 200 vis-à-vis the 390 was in the braking and tyre department. Slip these two upgrades onto the 200 and I would be seriously tempted to pick David over Goliath!

The 2017 KTM RC 390 is now fully loaded for the track. The playground for which it was built. You can pretty much ride the bike as is on the track and still have a blast. Safely! The 390 does feel like a proper upgrade over its predecessor, with the inclusion of RBW and a slipper clutch, along with the other useful additions like the RVMs and adjustable clutch and brake levers. The 200 would have been even better if better brakes and tyres were provided, at least as an option. Currently it is old wine in a new bottle. But still good wine!