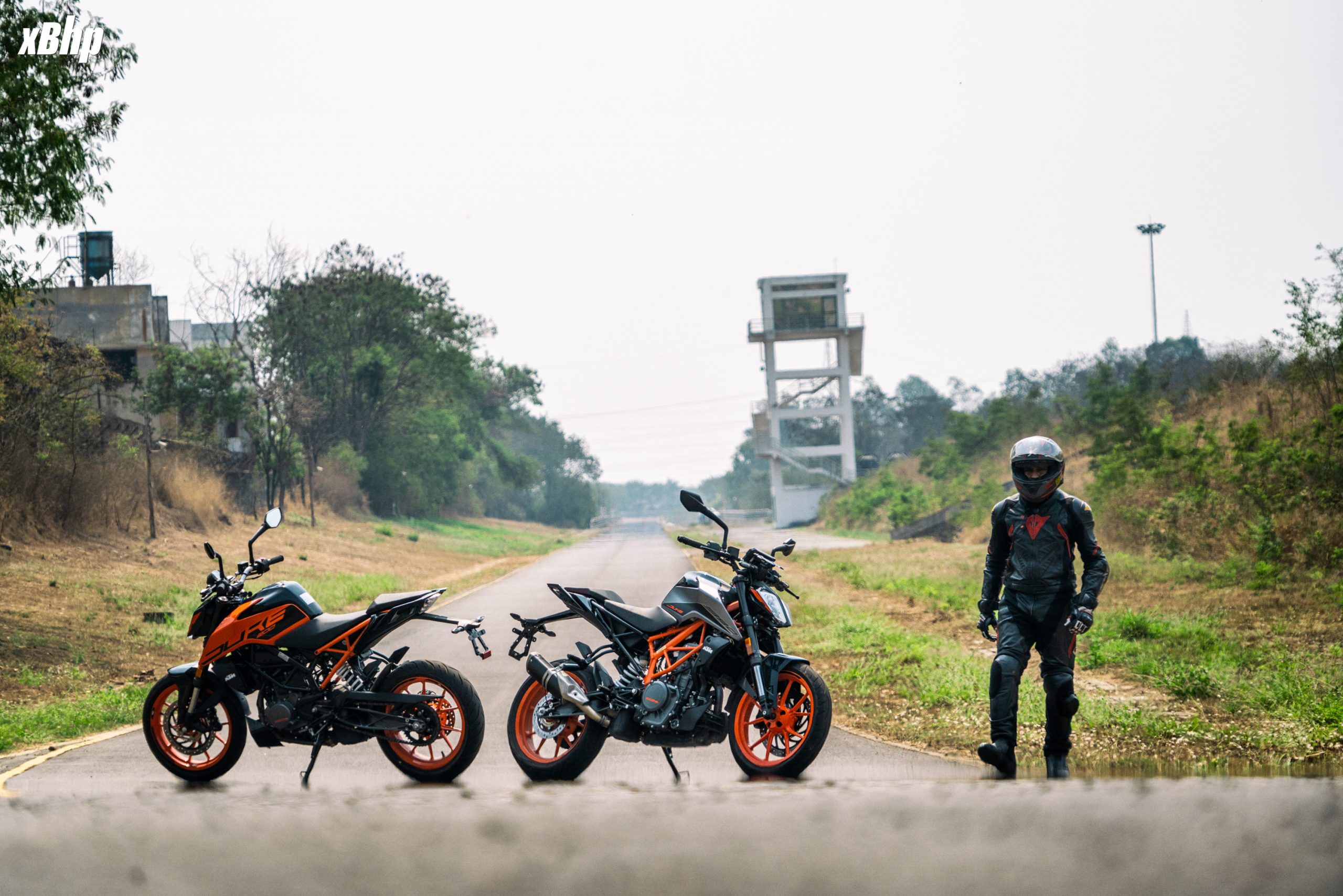 As the deadline for the roll-out of the BS6 only vehicles is nearing, it is raining new/upgraded two-wheelers in India. Though the market sentiments are not really favourable, we are not the ones to complain. Hopefully, the arrival of new products will help in the revival of the market. The latest one to help this noble cause is KTM who have fielded the BS6 variants of their entire lineup in the market. And this follows, very closely, the launch of the much-awaited KTM Duke 390 Adventure.  We were there at Chakan in Pune recently to ride two of the most prominent of these BS6 KTM machines – namely the Duke 390 and Duke 200, both of which, apart from the BS6 compliant machines, have received a bunch of other goodies as well to bolster the sales appeal.

The oldest member of the KTM family in India, the Duke 200, walks away with the maximum bounty in this upgrade fest. Not only has it received the new greener mill, but it has undergone a much-deserved makeover. The BS6 KTM Duke 200 doesn’t look like Duke 200 of yesteryears at all, but it has moved closer to the Duke 250 in terms of the overall styling. In fact, there is very little difference between the 200 and the 250 when it comes to visual signature now. The most prominent difference between the two remains the exhaust system  – the Duke 200 still has the underbelly exhaust. Here’s xBhp’s review of the KTM 200 Duke when it was first launched in 2012

The Duke also receives a lightweight split trellis frame, a new bigger tank, a new halogen headlamp with LED DRLs, and Dual-channel ABS.  And much to the delight of long-distance riders, the fuel tank is now 13.5 L instead of the 10.5 L on the outgoing model so you can cover 30% more distance before having to stop for refuelling.

The engine parameters remain the same as the outgoing model. The 2020 KTM Duke 200 still has the 199.5cc, liquid-cooled, 4-stroke mill that makes 25 ps of peak power at 10,000 RPM. The peak torque figure has gone up marginally from  19.2 Nm to 19.3 Nm at 8,000 RPM. The exhaust sounds a bit subdued and we would have preferred a bit more bite on the rear brake. But the overall dual-channel ABS system seemed to work well to tame these Austrian horses. The switchgear and the mirrors remain the same, while KTM has finally shown some sympathy towards the pillion riders and made the pillion seat bigger and they say it is more comfortable as well, though we didn’t get to try this. The fuel economy should remain essentially the same but you can expect it to improve a bit owing to the BS-6 engine which is supposed to burn fuel more efficiently.

Now, it all boils down to how all these new and old elements work together in unison and how they make the riders feel. As we mentioned earlier, this is the desperately needed makeover for the 200. While not much has changed in the numbers game, there is a considerable difference in how you feel when you first swing your leg over the bike and sit on it. The bike definitely feels bigger now and has a much sharper overall visual signature.  Thumb the starter and put it in the first gear, it leaps and accelerates ahead with almost the same eagerness that the Duke 200 is known for. What has changed is the overall stance, which felt a little less aggressive. The overall feeling now is that it feels much more mature, and not that straight-out-of-college unguided missile, but like the 25-something boy who still parties hard but realizes that he is not supposed to ride once he is drunk. Hope you get the analogy. And yes, the Duke 200 is available in 2 new colour options – Electronic Orange and Ceramic White. It can be yours at a price tag of 1,72,749, Ex-showroom Delhi.  Coming to the Duke 390, the bigger Duke remains more or less unchanged except the introduction of Quickshifter+ to add more frills to the already potent package of the motorcycle. What a quickshifter does on a motorcycle is that it allows for clutchless gear changes, which in turn saves power loss which happens due to engaging-disengaging clutch. The quickshifter on the Duke 390 is bi-directional which means that it would allow both upshifts and downshifts without having to use the clutch. It is now available in two new colour options as well – Ceramic White and Silver Metallic – with new decals. The price of the 2020 BS-6 compliant KTM Duke 390 is INR 2,52,928 Ex-showroom Delhi.

The 2020 KTM lineup (read more about them here)