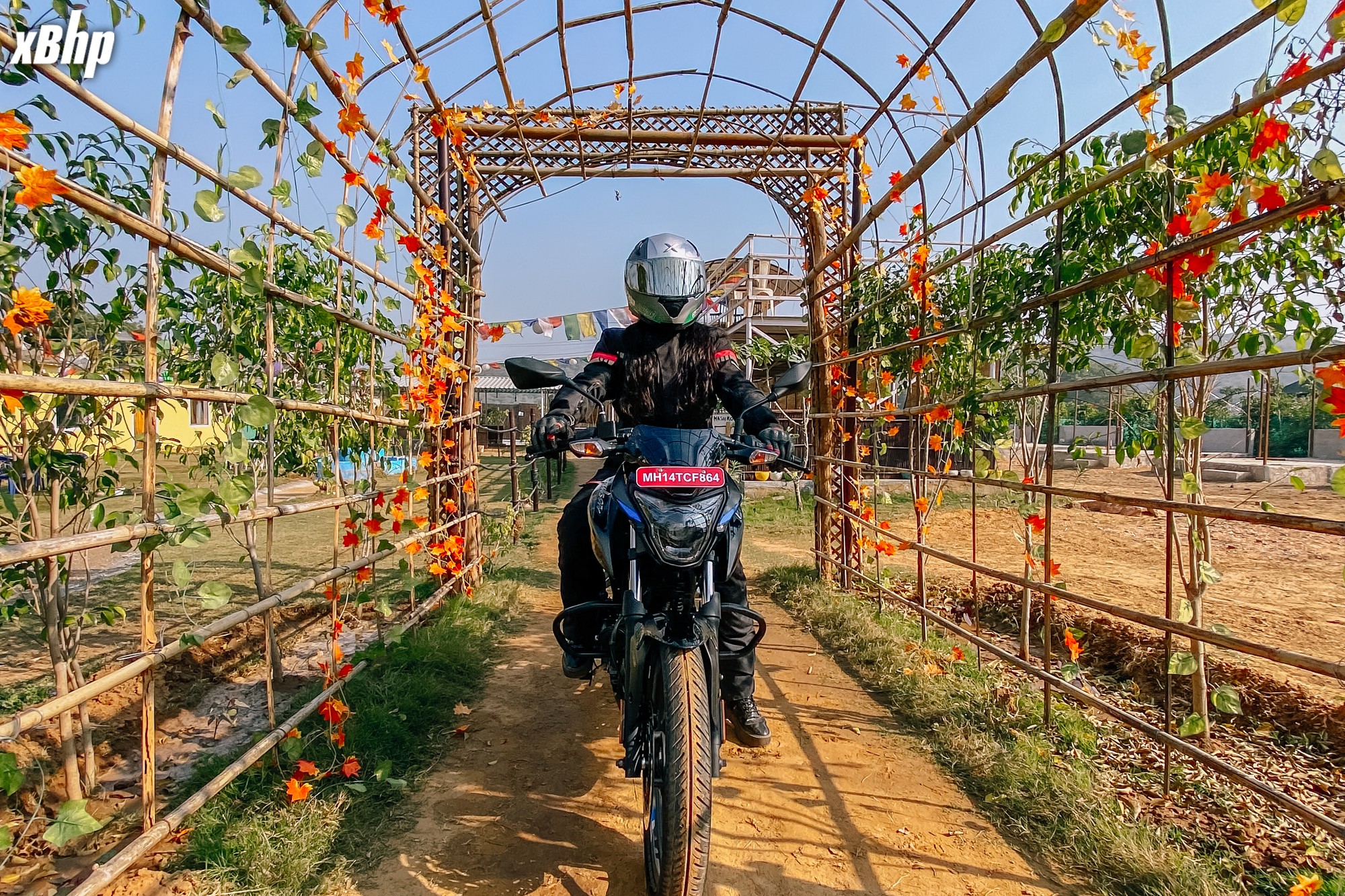 I recently had a stint on the racetrack where I rode what I call the Holy Trinity of motorcycles on the racetrack. Kawasaki Ninja H2, Suzuki Hayabusa, and the Triumph Rocket 3 R. Not too long after, I found myself on the racetrack again. This time with a very rare and very special machine.

In fact, it is one of the rarest in India, with only around 5 examples throughout the country. It is a machine meant for the racetrack but it is meant only for the hardcore. No electronics, no rider aids, no forgiveness and only brutishness- the KTM RC8R.

It was recently added to the xBhp Garage and I have not gotten a chance to ride it a lot. I have just ridden on the road for around 20 km. And yet, here I am, willing to tame this wild beast around the Buddh International Circuit knowing well that I will have my hands full through and through.

There is one department where I do not have to worry though. My KTM RC8R has been treated with the newly launched Castrol POWER1 ULTIMATE 10W50 Superbike Oil, a special formulation that Castrol came up with to tackle the formidable combination of superbike demands and the testing conditions that Indian summers present.

The KTM RC8R is a machine that is meant for the racetrack and it is evident in the name; RC  stands for Race Competition. It serves as the basis for the modern-day RC series so if you have ridden one of those, you know the DNA that the RC8R possesses. It is just the displacement that has accentuated the traits further.

This track day of mine is not a competition though, thankfully. It is a regular track day where you ride and do your best in terms of timings. Yet, I am a little jittery. I am not a track day frequent and whenever I am here, I am with a motorcycle like the Streetfighter V4 S or something, motorcycles that are loaded with the safety net of electronics and rider aids.

Here, with the KTM RC8R, I am bound to be jittery for more reasons than one. A lot of people have told me to be careful as the motorcycle does not even have traction control. It might make a seasoned racer jump with joy as they hate the intervention.

But for someone like me and most other people, nearly 175 bhp without traction control can be a bit much. Even more so when the 175 bhp comes from a V-twin, those mills are known for their cranky power delivery.

8 AM and it was alright, not too hot. I looked at the RC8R in the pits wondering what was in store for me. I knew that by the time we would be out on the racetracks it would be hotter, much hotter. That, in turn, means the track will be even hotter. That is also one of the reasons why I was uneasy because too much heat makes the track sort of greasy. The traction is there but it is right there at the edge of the precipice.

I did not want to crash, of course. But more than crashing, it was crashing the RC8R that had me worried. Spares and repairs are hard to come by for rare motorcycles and the ones that are no longer in production. Getting it serviced for this track day was enough of a task, it was a fair bit of work, to say the least.

I know the KTM RC8R has a maddening engine under its fairing. Extremely high compression ratio, mighty high displacement for a twin configuration and add to that the ambient heat. But then, I was sure that the new Castrol POWER1 ULTIMATE 10W50 Superbike Oil was meant to tackle that and based on prior experience with Castrol POWER1, I was relatively mellow in this regard.

Before I tell you about how it went, I will tell you that I had not tweaked anything on the motorcycle. The suspension and everything else was left the way it was and the only thing done was servicing and some cosmetic touch-up. Now that we are ready, let us go.

Right from the get-go, I knew that the jitters were there for a reason. It is a mighty difficult motorcycle to ride on the racetrack. Even more so with the lack of proper racing slicks. Before I completed my first lap, I thought a 2’20 would be a good time for this motorcycle considering I had done 2’09 with an S1000RR. After the first lap though, I decided that there will be no pre-ordained targets.

By the time I was out on the track, the ambient temperature had climbed up to 40°C and the track temperature was well above 50°C. The tires barely held their own and I had no electronics to fall back to. It also perches high and therefore, finding a comfortable riding position also took some time.

After I was done with 9 laps or so, I had a fair bit of an idea about what I thought of the RC8R. It is a very, very capable machine. If someone can ride it on the knife’s edge, it can compete with full-blown 200 bhp superbikes. But for that, it needs an equally capable rider. A rider with a serious understanding of the limits of traction. Even then, they would need a considerable amount of time to be able to push this machine to its limits.

Needless to say, I did not. Throughout my time out on the track, I felt like I was going to slip, that is how hot the tarmac was. So for someone like me to be able to remotely enjoy a motorcycle like this, basic traction control and ABS are bare necessities. It was a sensory overload too and it was thrilling, in a way. But it was nerve-racking and not something I can do regularly.

I had an idea that it was going to be a difficult motorcycle to ride but that much? I did not know that! Also, another peculiar thing is that it would not go over 275 km/h and apparently, it was a limitation of older V-twins. Talking about the engine, let us talk about how it performed.

The engine of the KTM RC8R is unadulterated. You have to learn your way around how it responds to the inputs in order to live with it. The torque is immense and even when you are a gear higher, it can still accelerate like hell. But then, consistency is key. If the engine’s behaviour is consistent, the process of adaptation is a bit easier.

With the new Castrol POWER1 ULTIMATE 10W50 Superbike Oil, I had all of that and more. Despite the searing heat and the crazy engine, the oil 5 in 1 Full Synthetic Formula worked flawlessly. Throughout my time on the track, it did not let the engine miss a beat even once. Enduring performance is what they promise and enduring performance is what Castrol POWER1 ULTIMATE 10W50 Superbike Oil delivered!

Castrol also promises smoother operation and excellent acceleration which was apparent and allowed me to make the most of corner exits. By optimizing the friction between the moving parts, Castrol POWER1 ULTIMATE 10W50 Superbike Oil ensures results on both fronts.  Though I did not risk opening the throttle with the bike leaned over, I waited for it to reach the fatter part of the tyre before giving it the beans. Even then, within a lap or two, I had a fair idea of what to expect and for that, I have to thank the engine oil.

All in all, the Full Synthetic 5-in-1 Formula works wonders for a superbike by providing better results on the five fronts I mentioned above. Again, based on my experience and Castrol POWER1’s merits, I expected nothing less. Being a pioneer in lubricant technology, Castrol POWER1’s pedigree is proven at the top level of motorsports, MotoGP. And when a brand with that much credibility claims, after rigorous testing in their UK labs, that the new Castrol POWER1 ULTIMATE 10W50 Superbike Oil is their best 4T oil ever for high-performance engines, it comes with a lot of clout; which I witnessed firsthand during this stint of mine.

The new Castrol POWER1 ULTIMATE 10W50 Superbike Oil comes in a new Rose-Gold packaging with a telltale superbike callout and is available at Amazon, Flipkart, and key Castrol Dealerships and Bike points around you for ₹1200 per liter.

Now, about the motorcycle, would I recommend it to someone looking to set racetracks on fire? If you are a good rider, a very good one, by all means. If you can extract everything out of it, it’ll leave you thrilled and probably placed rather high on the timesheets too. But if you are not, if you are new or doing this just for fun, you will be better off with a modern Japanese or European motorcycle.

But if you just want it for the exclusivity or the presence, there are not a lot of motorcycles out there quite like it. Off the top of my head, the only thing I can think of is probably the Benelli Tornado 1130R. Now you know how exclusive the RC8R is. Anyway, I am honoured to have tried this brute of a machine on a racetrack, without crashing. But it was exciting nonetheless.