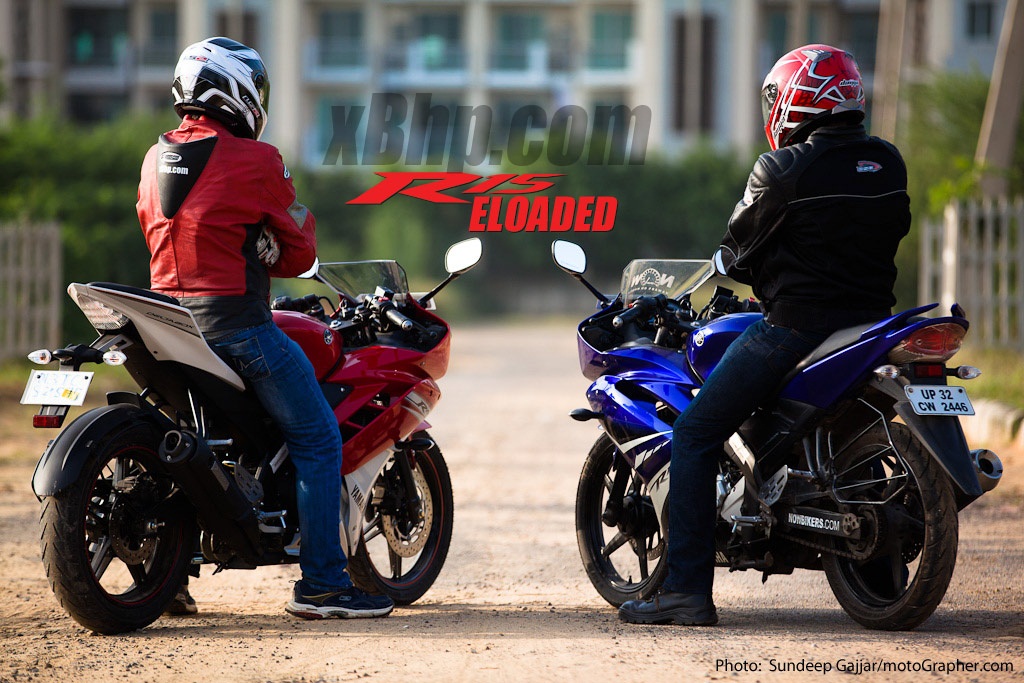 I remember the Yamaha R15 (V1) creating quite a flutter when it was launched in mid-2008. I rode one extensively during our pan-India ride in beginning-2009, accompanied by 2 examples of its biggest brethren – the YZF R1. The R15 then was a very different product from what the typical Indian motorcyclist had been used to. It not only looked like a serious sports bike but also handled and braked like one. Incidentally the ‘go’ was actually missing to a large extent, at least in accordance to what the rest of the bike promised and one rode it more on the inertia than power or torque. Riding it on the Golden Quadrilateral was fun as you could build up speed there and hold it. But hit a city and throttle wringing was the order of the day. We also experimented with wider tyres than stock with a different tread to give it better off-road capability but made an embarrassed reversion back to the original rubber. The bike was pretty well sorted out in all quarters of situational and directional control and meddling with the basics was not warranted. Of course the low ‘low end torque’ made riding in traffic quite a pain even though the 6-speed box was impeccable in up and down shifts. Subjectively, the anemic-looking rear end was sort of an eyesore and the thin-section rear tyre subtracted from the visual strength of the bike.

Yamaha apparently did some extensive bit of observing and analysis of inputs from various discussion forums and through direct customer feed-back and devised a strategy to upgrade its flagship product in India. Unofficial ‘scoop’ pictures of the new version undergoing road-tests were flashed on the net and caused quite a furor, sparking speculation about an imminent increase in engine power and performance. That the new bike would have a differently treated rear end was pretty certain but the rest was speculation. Yamaha finally launched the bike in New Delhi on the 6th of September 2011 and lay to rest all further conjecture. The new bike was primarily an upgrade on the structural and visual front with minor tweaks in the engine department aimed at making it more ‘rider friendly’. An increase in power was warranted but people at Yamaha apparently thought it better to leave the proven and reliable motor alone albeit with a few minor changes to improve its usability. xBhp rode this all-new R15 V2 and brings this exclusive review to its readers.

The looks: Having had a real up-close look at the bike at its Le Meridien launch a couple of weeks ago, I was keen on getting to ride an actual example and that too in typical urban riding conditions, where the majority of these bikes would spend their working life. Even though ‘looks’ are the most subjective of all attributes, the Version 2 does carry an almost universally positive visual appeal. It looks a lot more purposeful and proportionate now compared to the V-1. With motorcycles, the rider is a very important element not just for its functionality but also as far as its looks go. Meaning that if we call a bike a good looker, then it should look good both with and without the rider. Standing still sans the rider, the V2 gives a decidedly purposeful bearing. It projects the image of an outright serious sports-bike that means business on tarmac. The tail-high nose down stance adds to a sense of speed as does the front fairing even though it’s been carried over intact from V1. The new split seat carries the DNA transplant from the R1 to an extreme but then why not? Whatever’s inside should also show on the outside eh! And as with the R1, the pillion is surely in for a hard time. Though this design, apparently aimed at sort of ‘discouraging’ the pillion, is another indicator of its ‘true to the track’ credentials. That the new rear seat set-up is high is testified by the fact that I had to be consciously careful while swinging my leg over the saddle to avoid hitting the top cowl. The 130 section rear tyre adds visual weight to the derrière and in conjunction with the sharper ‘waspish’ tail piece allied with that angular LED tail-light, the R15 V2 posterior sure is alluring and carries a sting. The new ‘silencer protector’ with that carbon fiber look as is the mid-cowling treatment are a good touch. The new tyre hugger adds to the purposefulness and the plastic quality overall is as good as it was with V 1. The overall build of the bike feels robust enough to last and will wear quite well.

Sit and feel: The seat-footpeg-clip-on relationship feels a trifle altered, for the better I believe for taller riders as my almost 6 ft tall and equally ‘wide’ frame could easily fit between the three without feeling cramped or needing any contortion. The controls fall into hands naturally without a need to search for them as do the gear shift and rear brake levers underfoot. There is no great difference in the dimensions of the bike, the kind that would become apparent just by sitting on it. The seat height remains unaltered and even short people will have no issues flat-footing while astride this bike. The clip-on end grips feel softer and more slip resistant.

The engine: Yamaha states that they have tweaked the ECU and drive-train specifications of the engine to improve the one Achilles’ heel V-1 had vis a vis its anemically poor low-end torque and the resultant slow acceleration off the line. The changes to the ECU mapping, a more rigid clutch axle shaft and a better throttle pulley result in a decided difference in the way the bike pulls from stand-still and while in motion. The off-the-line acceleration feels a lot better compared to V1. You don’t really need to wring the throttle on this one to get some semblance of a pull while getting off the blocks. Even high-gear low RPM response is notably improved. For instance, the bike pulls cleanly from 3.5-4k RPM in 4th gear during a turn, something that the V1 never did. The clutch felt lighter but it could have been just me. Gear shifts were impeccable as ever and the six-speed box shifts positively and cleanly. The bike pulls cleanly from any RPM without a hint of snatch or judder. I did feel a semblance of a flat spot somewhere around the 5k RPM mark as there was a reduction in the initial thrust before the pull reasserted itself beyond 6000 RPM. It was almost like a transition overlap between the changes done for improving the low-end to maintaining the top end performance. The engine sounds great though, solid, throaty and vibration free. The heat from the radiator does hit the calves but whether in singes the legs will only become apparent in peak summers. The weather is getting better here. I did not have the opportunity to measure the fuel efficiency of
the bike but see no reason for it to be any worse than what the V 1 returned.

The ride experience: Press the starter button and the engine starts with the promptness of a well-designed mill. The idling RPM rises a bit initially before settling down as the engine warms up and throttle blips there-on produce unhesitant response. The clutch is light and smooth and the first gear engages with a soft thud. Pulling off from stand-still is a breeze now and the bike accelerates through the gears briskly. There’s an eagerness in the way the engine produces power and even early up-shifts through the box don’t result in any perceptible drop in the thrust. I couldn’t really push the bike into higher RPM’s anywhere close to the red-line as it was new and owned by a trusting friend. Straight line stability is amazing as ever and turn-ins have no perceptible sluggishness compared to V-1. This was a crucial comparative parameter considering the wider tyres were expected to adversely affect the roll-in. But V2 remains as flickable as and planted through the curves as its predecessor. The all new Aluminum swing-arm apparently is a major contributor towards this unchanged handling. This new swing-arm is lighter and more rigid that that used in V 1 and also adds visual value to the frame. Braking is again great as before though the rear did feel more effective. Have always felt that with the R15, the front dives a little more than it should, possibly because I am a ‘heavy’ rider but then a bike is not designed solely for 60 kilo slim fits, is it? A stiffer front suspension would go a long way in enhancing rider confidence during hard braking. The rear suspension of the R15 (both V 1 and V2) has been an amazingly judicious mix of softness and stiffness and feels just wonderful. Even prominent road irregularities are dispatched with disdain and the bike remains planted as if glued to the tarmac. The horn sounded better and louder and the head-lights looked bright. Cannot comment on beam spread and illumination as I rode the bike in broad daylight. The rear LED shod tail-light is bright and clean looking. A definite improvement over the incandescent lamp.

Verdict: Costing an additional Rs. 7000/- over and above the price at which V1 was selling, the R15 V2 makes this flagship Yamaha motorcycle even better value for money. The 150cc liquid cooled mill is a real workhorse, taking even the worst abuse and grossly unsympathetic usage in its stride and keeps going strong. It’s proven itself many times over in the past three years and has an enviable following of its own. And it gets even better with the tweaks improving upon its user friendliness. The bike looks wholesome now and satisfies the majority vote in the looks department too. The larger rear disc, wider tyres, a new aluminum swing arm, a decidedly sportier stance and those utilitarian engine tweaks make the Yamaha R15 V2 a real pleasure to buy, own and ride around.