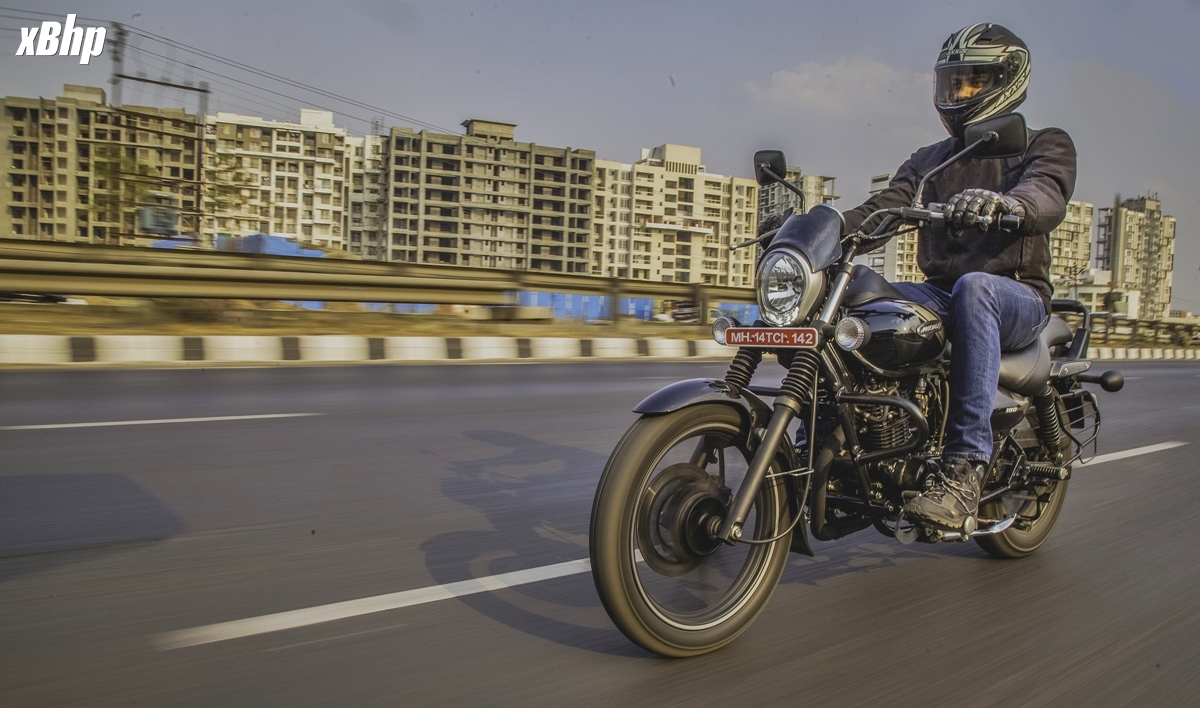 “If we can’t save our monopoly in this segment, we’ll surely Avenge(r) it!”

Marvel is not the only one coming out with its new Avengers in 2018. With the Japanese competition ‘Intruding’ in the entry-level cruiser segment, Bajaj has decided to update their ‘Avengers’ for battle. The update is mostly visual when it comes to the bigger siblings a.k.a. the Street 220 and the Cruise 220. It’s the youngest Avenger that gets an engine upgrade in addition to the visual ups. The Avenger Street 150 is now the Avenger Street 180. We find out how much of an upgrade it really is. Why change something that’s already good. This seems appropriate to describe the ideology of Bajaj. The styling of the Avenger series is tried and tested. It has also been well received by the target audience. The same goes for the new Street 180. The same design cues such as rubber covered front forks, low slung seat etc. make their way in the design of the new Avenger as well. This time around it gets LED DRL’s which slightly changes the shape of the headlight section. The effectiveness of the headlights at night though, is yet to be tested. The motorcycle gets a redesigned tail section which goes well with the overall stance of the bike. Another change in the tail is that the grab rail is now rubberized which should make the bike more comfortable for a pillion. The seat is big and roomy and has a carbon fiber like texture which ‘looks’ good. The pillion seat though is a bit narrow. Apart from that, the new paint scheme and the new Avenger insignia accentuate the visual updates. Overall the bike looks good from all angles but then, styling is subjective.

The overall build quality is passable for the asking price of the Street 180. The quality of the paint used is nice. The fit and finish is also fairly good. The switchgear does not go with the looks of the bike. The buttons and sliders have a good tactile feel but look puny. The Street 180 does not get the digital console used on the bigger Avengers. The speedometer is analogue and has a digital readout for the odometer and a single trip meter. The fuel gauge and other tell tale lights such as the indicators or turn signals and headlight position are placed on the tank. This goes with the looks of the bike but it’s not in the rider’s view so it does need some getting used to. The key of the Street 180 is a bit small-ish. The ignition insert for the key is on the right side below the tank. The handle lock has a separate insert near the handle on the same side.

The engine for the Street 180 is borrowed from the Pulsar 180 which has been tuned for the cruiser character of the bike. It is good for 15.5 Ps of power at 8500 rpm and 13.7 Nm of torque at 6500 rpm. The power and torque figures which although are achieved at the same rpm as the Pulsar, are actually lower than that of the Pulsar. According to Bajaj, this was done to make sure that the engine is less stressed and consequently offers a smoother ride which was true to some extent. The Street 180 did feel smoother and more relaxed than the Pulsar. The Bore-Stroke ratio of both the bikes is the same. This makes the Avenger a little less tractable as the rpms build rather quickly for a cruiser. Pulling the bike from lower speeds in higher gears is achievable but some engine knocking is evident. Nevertheless, the engine felt smooth on the highways, and fairly punchy in city traffic.

The comfortable cruising speed is between 80 and 90 kmph, above which mild vibrations start to creep in the handlebars, seat and the foot pegs which only get worse as you push the motor further. Another thing that I noted is that after riding for an hour or so, there was this strange metallic whining noise when pulling the bike from about 60 kmph in the 5th gear and it was there to stay even after speeding up. This might have been an issue with the specific unit provided to me, but I cannot be sure. The starter button worked well as the bike started with a single push of the button but after an hour of riding, it did miss a few. The exhaust note has got more grunt when it’s idling but while moving and accelerating, it’s the typical Pulsar tune.

The gearbox is smooth and the gear shifts were crisp. The clutch was also light, which is a boon in city traffic. There were a couple of false neutrals but that’s not going to be an issue. The shifter is of the heel-toe type and works well but if you have larger feet like mine, they tend to get stuck between the foot peg and the gear lever.

About the fuel efficiency, Bajaj claims a figure of around 45kmpl in real world conditions. This should give you a range of around 550-600 km as the Street 180 has a 13 litre tank.

The handling of the Street 180 was quite good. In fact, it was better than I expected. The bike felt planted on high speed straights as the result of a long wheelbase. What surprised me was the stance of the bike in the twisties. The bike was planted and there was never a moment when I felt that the bike was being pushed harder than its limits. It is not a corner carver like the KTMs, but to be fair it’s not meant to be that. This characteristic of the motorcycle might have been the result of slightly stiffer rear suspension, which at lower speeds can be bothersome if you find a rough patch on the road. At higher speeds though, the Street offers a comfortable and plush ride by mellowing out the undulations on the road effectively. Direction changes are not extremely fast but quite good for the class of bikes that the Street 180 belongs to. Another revelation was the turning radius of the Street 180. Considering the rake of the bike, the turning radius was surprisingly low which results in more than comfortable slow speed U-turns.

The rider’s triangle on the Street 180 is above expectations. Even for someone as tall as me (6’3”), the bike was fairly accommodating. Thus, you ‘can’ ride for longer durations on this bike in varying traffic conditions. But can you? Well, if you want to serve your posterior with some punishment, you can. The seat which looks roomy and feels good at first, is quite stiff and someone with a less generous rear end like me, is going to be begging for mercy within an hour or so.

The braking duties are handled by 260 mm disc brakes at the front and 130 mm drum brakes on the rear. The rear-brake needs a serious upgrade to discs. The front brake though, was progressive and offered ample stopping power. ABS is something that Bajaj should have considered, at least as an option. All in all the Street 180 is an Avenger. It stands true to the nature of a cruiser-sportster barring a few niggles. The bike looks good, performs well and handles well too. Overall the bike is a good package but the most important factor is the price. The Street 180 retails at Rs. 85,498 /- Ex-Showroom Delhi which makes the bike great bang for buck. The fact that it undercuts its closest rival, the Intruder 150 by about Rs. 14500/-, makes the Street 180 a very exciting prospect.