Polaris Slingshot Review: “HOUSTON, Mars is so much fun…” As a ‘true blue’ motorcyclist I can attest to the fact that I did think twice before getting into the Slingshot. However, the rad appeal of this ‘contraption’ was far too strong for me to resist. The Slingshot is mass-produced by Polaris, the same company which makes ATVs and owns the Indian Motorcycle brand. The first time I saw this on the web I thought it was a concept car that would never see the light of day. Many people, in fact, did ask me when I was on the road, especially gas stations, that is this was something customized or could they just buy it from a showroom. Here is where it is most enticing, even in the USA this is uncommon on the roads, even though reports suggest it is indeed selling well. If you happen to import one in India, it would give any supercar or superbike serious pangs of jealousy. The Slingshot SL version that I rode/ drove was the middle model which you can buy for only 25,000 USD, that’s 14 Lakhs rupees! We would assume that if you were to able to register it in India it will cost around 22 Lakhs, which is extremely good for a vehicle of this character and power.

Other models include a base S version at 20,000 USD, SLR at 29000 USD and a newer version, the Grand Touring LE with gullwing doors!

In California you are required to wear a helmet by law while piloting this. It comes under the category of ‘autocycle’ which also classifies this as a car with a bucket seat since you need to wear a seatbelt as well. I would reckon it would be a better idea anyways to wear a helmet unless you have a face of Tom Cruise that can handle all the attention at any traffic signal in any country!

Eagle Riders, the world’s largest motorcycle rental company had a Slingshot in their Los Angeles facility. The first time I saw it in flesh in their showroom, I was like – what the good god is this! It looks unlike anything on the road or in the showroom that you can buy anywhere remotely with just this amount of money. The design is extremely uber cool without looking overdone. The quality of plastic and components used is also very good. The seats are made of a waterproof material which do not allow them to breathe, so it might be an issue on summer days. The view from the driver’s seat is clear albeit pretty low and might be an issue on Indian roads with tall trucks and buses. The whole cockpit looks very futuristic and the lines are very angular throughout with a 305 rear doing the trick of making it look like a Batmobile. Sad that mine was in red.

175 BHP, 2.4 litres 5-speed manual transmission keeps you involved like anything. Plus just one wheel at the back which is responsible for putting down all that power means the power slides and fishtailing is a common phenomenon with this 800 kg machine, even with traction control. It takes some getting used to before your confidence bar hits a high enough level with this machine’s dynamics. But once I got used to it I was literally doing pedal to the metal at every red light and corner. Talking about corners, it does hold its line pretty well, but at the back of my mind, I always had the doubt that it would lose its line if I accelerate too hard in a low gear while slingshotting it out of a corner. It will also do 0-100 in 5 seconds, which is pretty good. I do not reckon it can handle more power without addressing its traction control which plays a big role in a reverse trike to help control its line. Do not expect this to outrun high-performance cars or superbikes on the road, but this is fast enough than most cars out there, especially with this amount of money.

You will get wet and cold if it rains. Luggage will not be a really big issue. You have the glove compartment which hold quite a few tidbits and two storage compartments behind the seats will hold decent number of things for a long trip. You will probably also need to be extra careful on wet sinuous roads because of the way it delivers all that power.

The Slingshot doesn’t really have any competition. For one it looks way cooler and costs much less than what it offers. Three wheelers like Morgan 3 Wheeler and Can Am Spyder and the likes. Either they are way more expensive or they are not ‘cool’ enough for the money. And if you don’t believe the value for money for the Slingshot, test drive one or look for the reaction from people when you say it only costs 20,000 USD!

Trip 360, a subsidiary of the travel service providers Cox and Kings, is the one-stop for the adventure travelling enthusiasts. From trekking to diving, to mountaineering and of course—motorcycling, Trip 360 enabled us to make this wonderful trip to America—the land of opportunity.

Las Vegas is an oasis in the Mojave Desert. It is known for its nightlife with gambling, fine dining, entertainment and shopping being its biggest offerings. The city is one of the brightest when seen from above in the sky! During this wonderful trip we also got to visit the Indian Motorcycle showroom in the city that never sleeps aka Las Vegas. The showroom, in addition to Indian Motorcycle, had in it the showroom for Victory Motorcycles and the Polaris Slingshot. Three automotive brands, recognizable anywhere in the world, under one roof made for a memorable visit. 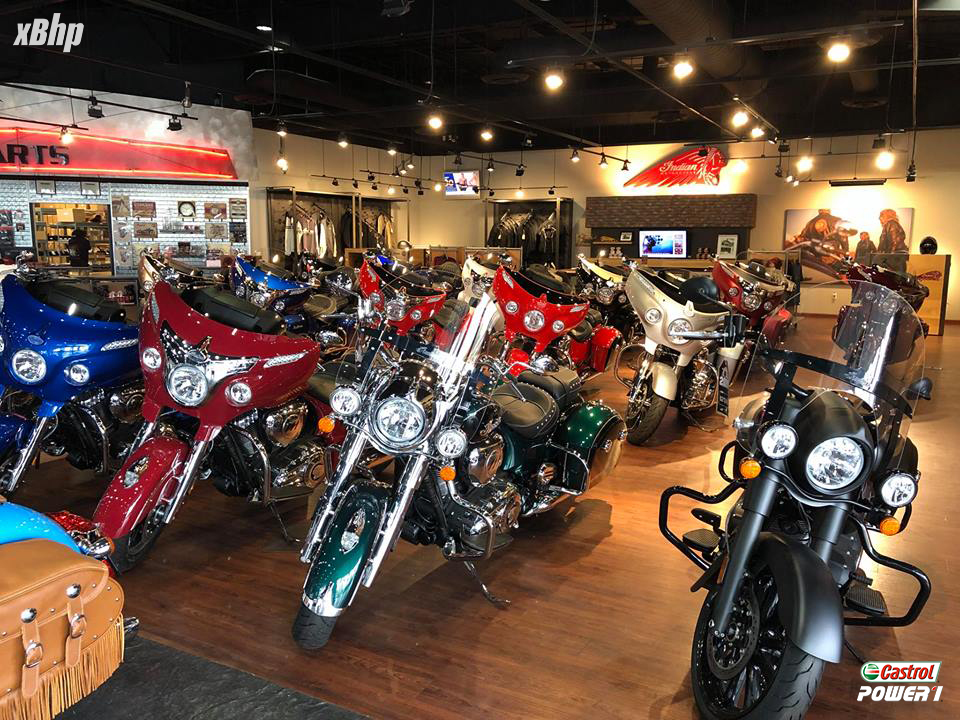 Exotics Racing is a Racing School and driving experience center in the United States. It has one of the world’s largest fleet of exotic cars. If one wants the experience of driving a supercar around the track and have boatloads of fun, there aren’t many places better than this. The facility is present in Las Vegas, Los Angeles and Spring Mountain, Nevada.

Death Valley is a desert in California. It is in the northern Mojave Desert. It is one of the hottest places in the world during summer!

Route 66 was one of the original highways in the US Highway system. It was established in 1926 and was a major route for those who migrated west and made prosperous the people who lived along this route.

You land in Los Angeles and take a 5 minute cab ride to the Eagle Riders main showroom at 11860 S La Cienega Blvd, Hawthorne, CA. Pre book your ride with them. Any additional insurance or roadside assist can be added on the spot before you take delivery. From there head to Death Valley via Panamint Springs, Stovepipe Wells and spend the night in Beatty which has plenty of stay options. Next morning head to Badwater which has one of the lowest points in North America (282 feet below sea level) and enjoy the barren mars like landscape. There are plenty of amazing photo opportunities without the crowd along the way. This day you can enter Las Vegas via the strip enjoying the million lumens on display there on one of the brightest spots at night on planet Earth. I stayed in Trump Towers on 52nd floor because I got a very good deal (not a Russian deal). In LV you can go to Exotic Racing track and pamper yourself in the seat of a supercar (that article is in this issue elsewhere). You can return back to LA via Joshua Tree National Park to enjoy a more desert like environment and some sand dunes.

Eagle Rider is perhaps the world’s largest motorcycle rental company with multinational operations headquartered in the city of angels – Los Angeles. From the USA to Australia, they are everywhere. The best thing about them would be that they hire hardcore motorcyclists who know what goes on in the heads of nutjobs like me who want to rent motorcycles and trundle down the open highway at the drop of a hat. With a wide variety of bikes to choose from, along with riding gear (leather et al) and friendly route advice one can go on a solo self-guided tour or a group ride. We got the Polaris Slingshot from them with full insurance. You can check out more details at www.eaglerider.com