PRIOR to this ride, it had been quite long since the last time I went somewhere for a weekend ride. When you are a working professional, it becomes difficult to take out the time for a full-fledged ride. Even if you can, it is more like once a year or once every two years. But for a motorcyclist, it is difficult to satiate the wanderlust in that duration. So short weekend rides have become my go-to. This trip, Delhi to Varanasi, is my most recent one. There are quite a few places around Delhi that would make for a fun weekend excursion. But most of the time, mountains are where all the motorcyclists head to and while they are sacrosanct and all, they do not have to be the destination of every ride. My friend was also willing to tag along and Varanasi was his suggestion. We also have some friends there and that was a bonus. Varanasi, also known as Banaras or Kashi, is a city on the banks of the river Ganga in Uttar Pradesh. As most of you would know, it is a major religious hub in India and also, the holiest of the seven sacred cities in Hinduism. Varanasi has been a cultural centre of northern India for several thousand years and is closely associated with the river Ganga. The city is known worldwide for its many ghats, embankments made in steps of stone slabs along the river bank.  Varanasi is around 850 km from Delhi and so, would make for a good day’s ride. And so, we started our preparations for this trip. Another exciting aspect of this ride was that our KTM 200 Duke was shod with Blaze series of tyres from JK Tyre. The icing on the cake… the TREELCARE kit made available for them by JK Tyre which essentially turns these tyres into smart tyres.

The TREELCARE kit is a combination of an accessory installed on the tyre and an application installed on your smartphone. Once set up, they provide you with the real-time monitoring of the tyres. From tyre pressure to tyre temperature, this system allows you to monitor your tyres’ health and it even provides you live notification for overinflation, overheating and even overspeeding. So, all set with the new smart tyres, and our bike, we were ready to set out on our Blaze’ing run from Delhi to Varanasi. All motorcycles can agree that once a rider is done with the preparations, the night before the beginning of the journey is a restless one. We were too excited for the ride and just as much to test out the new smart tyres.

We started out early in the morning so as to get an upper hand on the traffic in the initial part of the route. Once we hit the highways, it was smooth sailing till Lucknow. We took a couple of breaks in between and reached Lucknow at the onset of evening. The tyres, once up to temperature, provide phenomenal straight-line stability and grip. The tyres, in addition to the TREELCARE kit, make for a killer combination and provide a lot of confidence to the rider as they have the real-time access to the various parameters of a tyre’s health which is crucial during a long trip. We still had around 300 km to cover but we were in for a rather rude awakening. The road condition deteriorated post-Lucknow and some of the patches were especially bad. The tyres though did not let us down and after around 12 hours of riding time, we reached Varanasi. This is something I’d like to get out there… there’s something about Varanasi that’s just indescribable. It is a beautiful city on the banks of the majestic Ganga but the atmosphere, the whole vibe of the city is something otherworldly. We were quite tired because of the long ride but post entering the city, we felt rejuvenated. After roaming around a little and a fulfilling dinner, we decided to call it a day.

The next day’s itinerary was set and the first thing on the to-do list was to meet our friends. They were to be our tour guides as well. Our first destination post-meeting them was Shri Kashi Vishwanath Temple. But before reaching the temple, we also went to check out the Banaras Hindu University, one of Asia’s largest residential universities. And we got to experience the place firsthand. We interacted with a lot of local people too… getting to know the city and its culture better. The temple itself was simply majestic. We talked to a lot of people there too, getting to know quite a bit about the illustrious history of the temple and the City of Lights. Post that, we made our way to Sant Ravidas Ghat, one of the largest Ghats in southern Varanasi. But we made sure that we took our sweet time reaching there. The reason for that was to experience the city to the fullest. And that meant roaming around the local markets. Varanasi is also an important industrial centre. It is famous for its muslin and silk fabrics, perfumes, ivory works, and sculpture. While the major establishments, temples and ghats are what people usually use to define this city, the real Varanasi is in the streets and the markets.

Again, navigating the tight city roads and a lot of traffic was made easy by our faith in the tyres. Be it panic braking or accelerating out of traffic snarls, the tyres held their own and at this point, we were convinced that the Smart Tyres had basically turned our bike into a smart bike. Quite a few onlookers also asked us about what the phone on the dash and the TREELCARE app was all about. No surprise that they were impressed too. 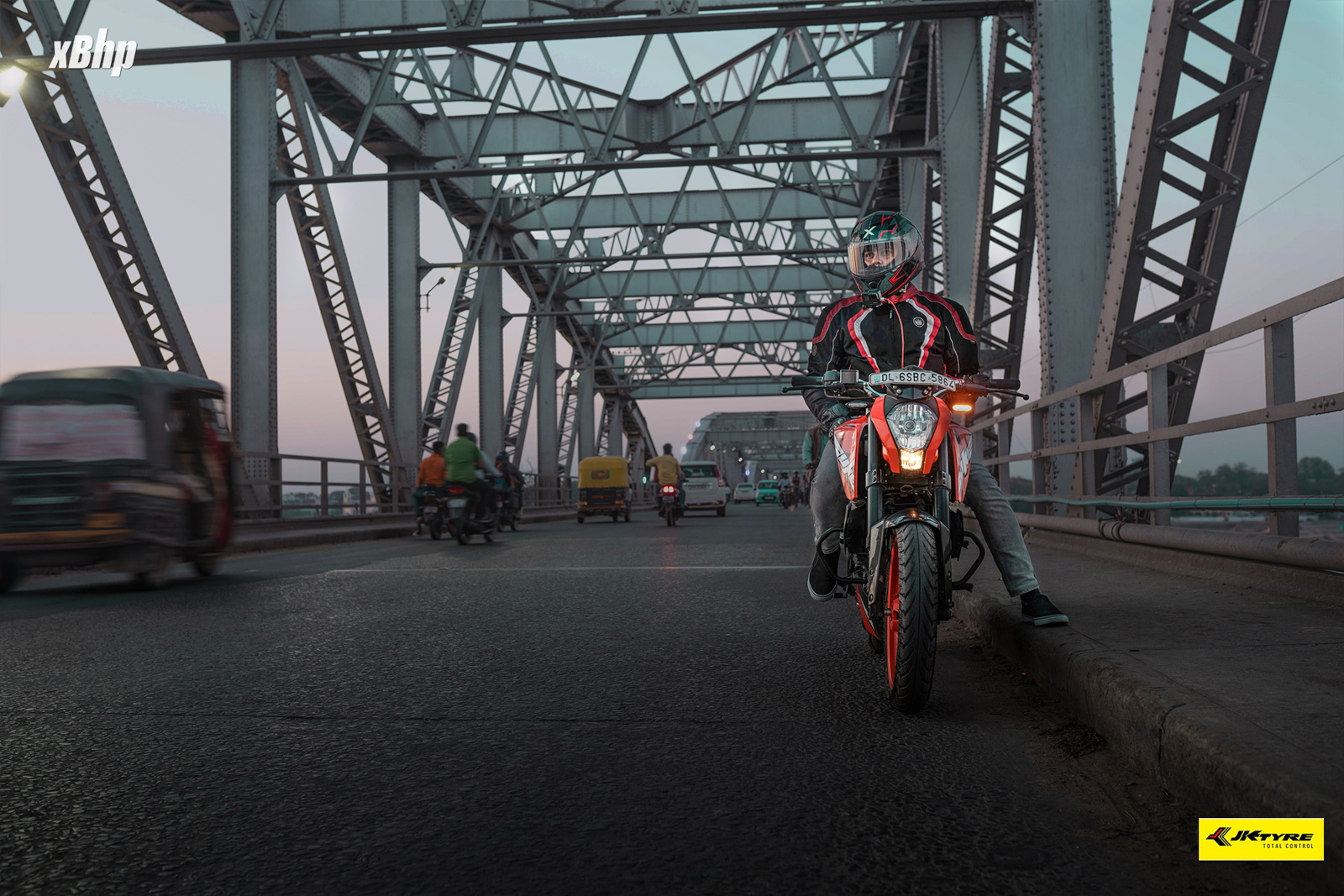 After having our fair share of fun, we finally reached Sant Ravidas Ghat. We were mesmerized by the view. It was so serene, so beautiful and so majestic that our excitement turned into tranquillity for a while and we ended up spending a lot of time there taking photos and just drinking in the scenery.

We did not want to leave the place but our friends had recommended a few other places so we decided to check those out too. The next place to visit was Raj Ghat and this was another sensational place. The view of the Old Bridge above the Holy Ganga… it was definitely something we wanted to cherish for a long time and so… lots of pictures! It was a day well spent and we finally headed to our hotel after visiting the market again and picking up some goodies for our families. Day 3 was the return trip but our friends insisted that we tried a few more things before we left. And so, after having a very special local breakfast in the Godowlia Market, we headed out with our friends. The next activity… boating! Once you are out in the river on a boat, that is when you are actually able to grasp the expanse of the mighty Ganga. During the boating session and after it, we had our last photography session.

We had lost track of time and the start of our return journey was delayed a bit. But with the amount of fun we had, it was all worth it. We went back to our hotels, packed our stuff, and headed back home. The return journey was more or less smooth with the exception of the broken patch that we encountered previously. We would like to thank our friends Sumit and Aman for being our generous tour guides and familiarizing us with the allure of the Holy City Varanasi in such a short time. A big thanks to JK Tyre for providing us with the fantastic Blaze tyres which always had our backs even in tough conditions. And finally, kudos to JK Tyre again for coming out with the TREELCARE Kit to turn these tyres into Smart Tyres. Being motorcyclists, we surely appreciate the innovation that makes our lives a little easier and these tyres, well, they do just that… and then some!

SMART Tyre is an ingenious product from JK Tyre, which provides real-time information about the health of the tyres through smart sensors. Just wrap the sensor around your tyre, install the TREELCARE app, scan the code on the backside of the product box and voila! You are done. You can now easily monitor the real-time health of your tyres. You can also use the TreelCare app as a stand-alone app and monitor up-to 10 vehicles simultaneously. It gives you alerts on the status of your tyres, including over-inflation and under-inflation.

The front tyre was really impressive and it performed as per the expectations and then some. One of the best things was the straight-line stability of the tyres. During quick changes of direction too, the tyre maintains its composure. The wet grip also seemed really good as we did encounter some wet patches during our run through the inner city.

The rear tyre had me hooked from the beginning. First of all, I really liked the tread pattern. It looked really good and went well with the stance of the KTM 200 Duke. Coming to the performance, up, I could feel the difference in the grip and control. And once they warmed up… man. A good set of tyres can really make a lot of difference especially when it comes to confidence under braking. With the grooves more than capable of channelling water away from the surface, it provides fantastic wet grip too.

You can buy the JK Tyre TREEL Mobility System from here