xBhp has always been about motorcycles. Supercars have caught our fancy from time to time but it has been limited to that. The Mahindra Thar may not be a supercar in terms of astronomical power figures or the money you need to shell out. But it still caught our attention. It possesses something primal, something visceral that tugged on the strings of our hardcore biker hearts. Then we got to drive it, and at that moment we knew that it had to be a part of the xBhp Garage. Firstly, what is it about the Mahindra Thar that drove us to get it? The grandeur is the first thing and it starts with the name itself. It has been a lifestyle icon for quite a while now and the modularity of the platform ensured that the buyers could project some of their own personality through the might of the Mahindra Thar. The new Mahindra Thar is an amalgamation of all that with practicality and creature comforts that make it a near-perfect car. It retains the silhouette of the original but adds a modern touch to it. The car is wider, looks more poised, the edges have been softened just a little and the wheels… Those 18” wheels with exquisite design and all-terrain tyres scream the intent of the car out loud. Step inside the car and it is not a Thar anymore, and we mean that as a compliment. In the old Thar, the cabin possessed only bare essentials and that too… barely. But the new one… It is a proper car now. Ours is the Petrol Automatic variant, powered by the mStallion 150 TGDi engine that makes 148 bhp of power and 320 Nm of torque. The reason why we went for the variant that we did was because of our intended use. The mStallion 150 TGDi engine is more powerful than the mHawk Diesel variant and more power is always better. But more importantly, we went for the petrol variant because our main use would be touring. While the mHawk is quite refined too being a diesel engine, the mStallion is a class apart in terms of smoothness and refinement. The automatic gearbox is also a boon, both in the city and on the highways. Finally, since we travel a lot, the hardtop variant made more sense for obvious reasons. The way the new Mahindra Thar drives is exceptional. The spread of torque is even throughout the rev range and the Thar pulls cleanly. The gearbox is not the quickest out there but with that much torque tuned for fantastic delivery, you don’t need that. And, about the forte, there’s a 4×4 low-ratio transfer gearbox and you know what that is meant for. Serious mud-slinging and we could not wait to try that. After our first drive, came the ownership, followed by our first serious adventure. We took our Mahindra Thar home; to the Thar Desert. In the case of the new Mahindra Thar, the dunes of India’s largest desert is where it was tested. Born and bred in such rugged terrain and such a tough climate, it was born to be a champion of the sand… and everything that entails. When we started out from Delhi on Christmas morning last year, we could not wait to reach Jaisalmer to make the car do what it is supposed to do. But by the time we reached Jaipur, we were in awe of it. What we had until now, for the most part, were highways and city roads. In between Delhi and Jaipur, we munched a lot of miles. Mahindra Thar, which has always been seen as a car that is too focused, surprised us with its versatility. When there’s traffic, the tractability of the Thar makes it easy to manoeuvre. On open highways when you cruise at triple-digit speeds, the Thar feels confident and sure-footed despite its short wheelbase. The cabin, in the hardtop version, is quiet for the most part so there’s that. It is a near-perfect road car. This was even more apparent when we headed to Jaisalmer from Jaipur. We encountered mostly decent roads but there were some bad patches too. Though we admit that in a car like this equipped with tyres like those, you kind of hope to encounter some bad roads. During our journey, another thing that we realized was that Mahindra Thar’s universal appeal. From in front of the tourist-ridden Hawa Mahal in Jaipur to some nondescript village, people always seemed so interested. That is all well and good, but as we crept closer to, quote-unquote, HOME, we were even more eager to get to know if the new Thar still possessed the legendary off-road capabilities of its predecessors. And then, after 800-odd kilometres, the Thar… was home. 4×4. Loads of grunt. Seamless transmission. Tyres and traction to die for. And cojones the size of a city. Those are the ingredients needed to cook up a near-perfect adventure just like this one was. Jumping over dunes, tyre arches filled with sand, and so many drift marks that you lose count even if you watch over them via a drone. This is the kind of life that Thar promises and we are talking about both the car and the desert. Jaisalmer was an absolute blast and after the extreme heat of the desert, it was time to turn the dial back to the other extreme- Snow! And here we were, on the way to the highest of the Himalayas, right after a drive to the desert, to have, well, a frozen dessert! The destination for this drive was Chitkul, a beautiful village in Himachal Pradesh. The odds of reaching this village were very few as we knew that the road leading to it was still blocked by fresh snowfalls and we would be very lucky if we could go anywhere near it. But as they say, it is the journey that matters and not the destination. The drive from Delhi to Shimla was forgettable, but the real deal starts when you cross Narkanda. Lush green mountains soon give way to rugged barren mountains that look intimidating and inviting at the same time. A kid going to an ice cream shop and us going deeper into the snow-laden roads – the excitement was the same. But it wasn’t easy. There was snow and ice on the road, making it extremely slippery and difficult to navigate; but again, the 4×4 Mahindra Thar made it look so easy. Fortunately or unfortunately for us, the road to Chitkul was still blocked with a bulldozer still trying to clear the snow. So apart from a couple of local trucks, there was no traffic on the road and we found the entire playground waiting for us. Inviting us to play with it. And play we did, from the sunrise to the sunset until it was the time to bid adieu and go back home. But just like all good things come to an end, this drive also had to end but not before we explored some beautiful villages of Punjab. And looking back, we just couldn’t stop admiring the all-new Thar and thank the good folks at Mahindra to come up with such a versatile and approachable machine that not only urges us to push our boundaries but also plays along and most importantly stays there as a trustworthy friend, keeping a watch and holding our hand, lest we do something really stupid. After all of that, it was time to one-up both of those roadtrips. #roadTripUnited2021 was a 10,000 kms trip around India aimed to unite motorcyclists, motorcycling groups and petrolheads in general. But it also united different kinds of machines. From the world’s fastest bike and the largest bike to the India-made RR 310 and NTORQ 125 which equally proved their mettle. But what could be the perfect four-wheeler to complete the cavalcade? We had already termed the Thar as ‘The Bikers’ Car’ and we believe that only the Thar had the personality to go head to head with such machines in a pack and be the critical pillars that we needed during the ride. Now, we did mention that we had two Thars, right? The first one, our own, had something extra. It was prepped for the trip by Bimbra 4×4 and that just bolstered the appeal manifolds. This does not undermine the fact that even in stock trim, it looks pretty darn rad. The modifications were thought keeping in mind that we all are gadget freaks and we also had two motorcycles that drank fuel like no one’s business. So we wanted to have an auxiliary fuel system that would at least double the range of the superbikes. We took 100 Octane-fuel for most of the ride in all cities that had them. And thanks to the power of the Thars they were never far too behind, not that we were racing. 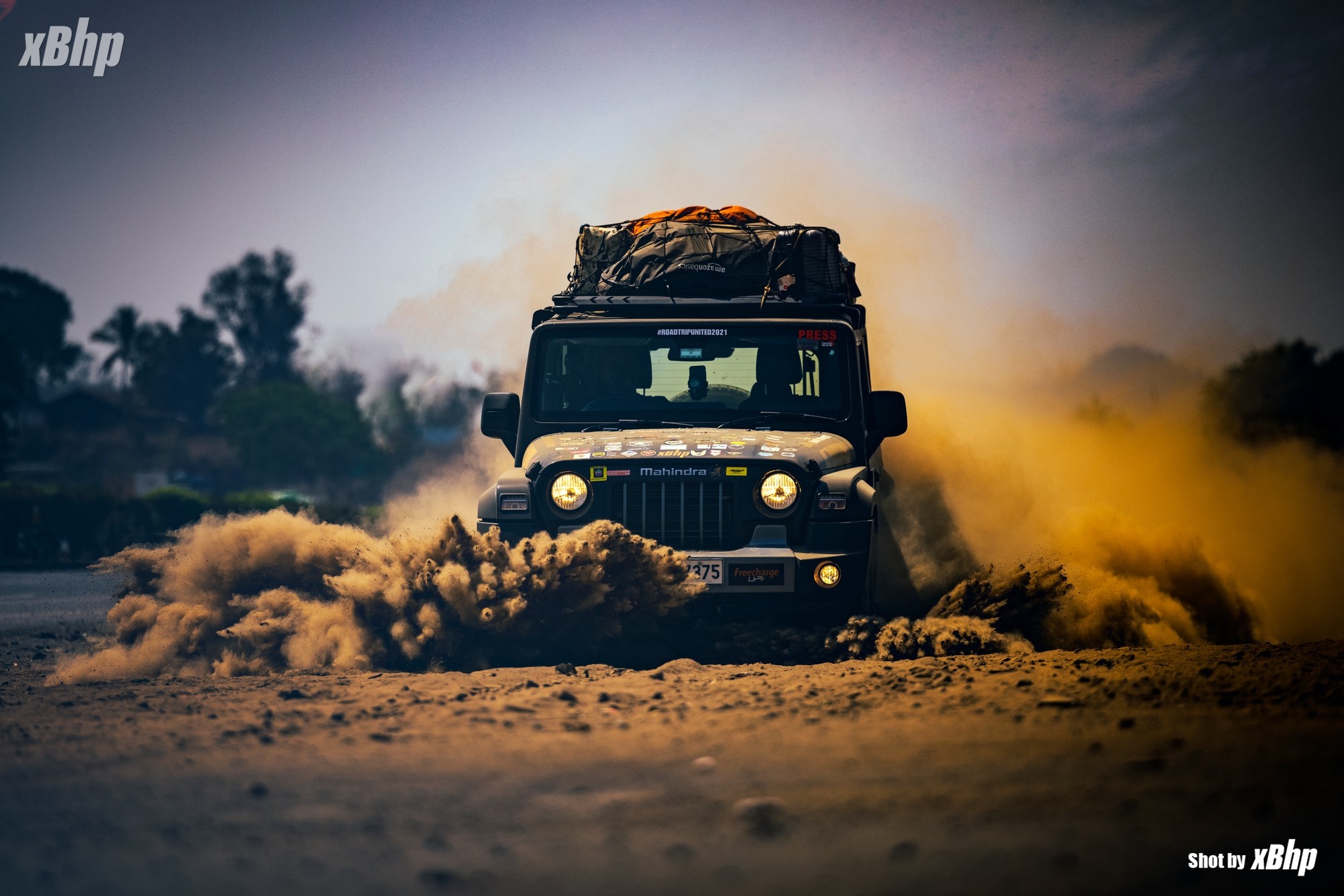 The Thars also enabled us to carry our luggage with a few additions like a custom roof rack and boxes, making it into a photography and cinematography vehicle. Small mods like the tray table helped us change lenses and send stuff from the road using our laptop when taking a tea break. It is not easy being a car with so much utility and character at the same time but it was for the Thars. The trip started from Delhi and proceeded towards Kolkata and then down south towards Kanyakumari and then back up via the west coast crisscrossing through the Nilgiris, Mumbai and Rajasthan. This 10,000 km ride taught us many things, showed us many things, and proved many things. But one of the more important ones is the fact that the new Mahindra Thar is perhaps the most complete car out there for the outdoor enthusiast. Especially for motorcyclists who look for some thrill every once in a while when a ‘regular car’ seems inadequate. After #roadTripUnited2021 we had the 18th anniversary of xBhp coming up. So along with all the motorcycles in the xBhp Garage, our Thar also got a makeover. In contrast to the Black Chrome that we chose for our motorcycles, the Thar got a Pearl White treatment. Post that, it has remained that way and has accompanied us to Jaisalmer (again) and NATRAX. It has been on roadtrips, it has been used to carry luggage, it is our daily driver when needed and it has enabled us to take up some 4-wheeled adventures whenever we have asked for that. And in all that, it has never fallen short of thrilling us. If that does not define a complete car, we do not know what will.