Determined to fight back and find its lost glory, Benelli has restructured their 2016 lineup and has included a couple of motorcycles that have a huge potential particularly with respect to the Indian market. 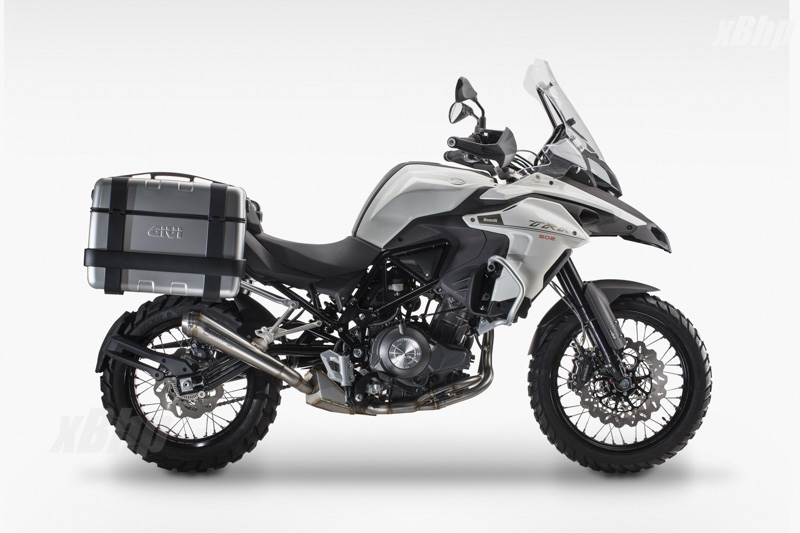 The first bike  that needs attention here is the all new Benelli TRK 502 – the adventure touring motorcycle for those who love to munch miles.  The TRK 502 employs an all new  twin-cylinder, 4-stroke, liquid cooled, EFI, double camshaft 500 cc engine wrapped in a traditional Benelli steel trellis frame that produces a peak power output of 48 BHP at 8500 rpm and a torque of 45 Nm at mere 4500 rpm. This engine is mated to a 6-speed gearbox and is controlled by a hydraulic clutch.

True to its touring nature, the Benelli TRK 502  has a huge tank which provides a fuel capacity of 20 liters. There is also an LED headlight on offer. The ground clearance is 230 mm. The bike has an unladen weight of 210 kg. The seat height will be 815 mm.  Braking will be taken care of by 320 mm twin floating disk at the front and a 260 mm single disk at the rear. ABS will be a standard. The bike also employs 17 inches rim at the front and rear. Pirelli Angel 120/70-17 and 160/60-17 tyres are mounted to complete this package. There is an adjustable upside down front fork and monoshock at the rear, which provide a suspension travel of 150 mm at the front and rear. Styling wise, you cannot help notice a bit of the BMW R1200GS in the TRK502, but we are not complaining. In fact, we will be spending many sleepless nights thinking about when we get to actually ride it, though Benelli says that the TRK502 will be launched in the second half of 2016. There definitely exists a huge (relatively speaking) market  for this genre of motorcycles that has been left untapped by the manufacturers, though RE will soon be bringing its Himalayan and will definitely have the first mover advantage. But if DSK-Benelli manages to bring this bike to India and price it competitively, they surely have a winner in their hands.