Ever since BMW unveiled the R18, it has been perhaps the most awaited cruiser in a long while. And that goes for India as well where the motorcycle will make landfall soon. Using words like landfall is justified as from the first looks, it looks like every bit of the storm that it was being touted to be.
We recently got to take a detailed look at the ‘Berlin built’ cruiser at the Lutyens Motorrad showroom in Delhi and we are beyond impressed. Here are some photos from our date with the behemoth.

As you can see in the first photo, the engine is the centrepiece of the motorcycle. And it is the biggest boxer engine built by BMW till date. The 1,802cc engine is good for 91 bhp of power and 157 Nm of torque. The talking point though is the rpm at which the peak torque is made- 3,000 rpm. Cruiser fans rejoice! The design is inspired by the 1935 BMW R5, perhaps the most beautiful motorcycle ever made. The round headlight harkens back to the classic theme of the R18 with the LEDs being the modern touch. This tasteful amalgamation continues throughout the design of the R18. The classic analogue single-pod dial again is an ode to the classics but the illumination, the riding modes and so on, add that modern touch. At the bottom, it says Berlin Built which means that the motorcycle is built in the Berlin-Spandau plant of BMW. The simplicity of the dial houses a lot of important telltale lights that are invisible unless activated. The key fob adds another modern touch to the R18 and please note that it says First Edition which means that this particular edition gets touches like the dual white pinstripes on the tank, a lot of chrome, and a logo for the First Edition. While the engine has 4-valve heads like any modern bike, they are still operated via pushrods that are activated by the dual camshafts. The camshafts, in turn, are driven off the crankshaft via a chain-drive. All the above and the use of shorter pushrods provides better control of the valve timing. Because of the massive size of the engine, the compression braking forces are significant and this highlights a need for a slipper clutch system that enhances the safety aspect by eliminating the rear wheel ‘hop n skip’ in case of botched downshifts. BMW has a lot of experience with both Boxer engines and shaft drives and perhaps, that is why the execution of both is simply flawless on the R18. It could also be the famed German engineering. Whatever it is, watching the chromed out and exposed drive shaft spin away is a sight to behold. There is a lot of tech hidden in the simple outlook of the R18. There is an option of ‘cornering headlamps’ available from the factory. Then we have the stability control, hill-hold control, reverse assist, and ABS which balances the braking force at the front and the rear when activated. That’s good and all but the most interesting aspect are the two riding modes- Roll and Rock, in addition to the rain mode. Knowing German engineering, quality is not something that one has to worry about. The motorcycle has been finished beautifully with ample chrome garnishing to light up the motorcycle even at a standstill. In addition to that, the motorcycle is touted to be highly customizable-  much like the R nineT Small details matter and a really important one is the seating and suspension arrangement of the R18. The 49mm standard forks garnish the front in a very traditional and analog manner. The rear suspension, a linkage-controlled single shock, is cleverly hidden inside the frame. The travel is also considerable; 120mm and 90mm at the rear. As it might be already apparent at the moment, the motorcycle is meant for markets like the US where the R18 will go up against the cruisers from Harley-Davidson. Mid-mounted, foot-forward controls, high handlebars, and exhaust note to die for do a lot to point the R18 in the right direction. 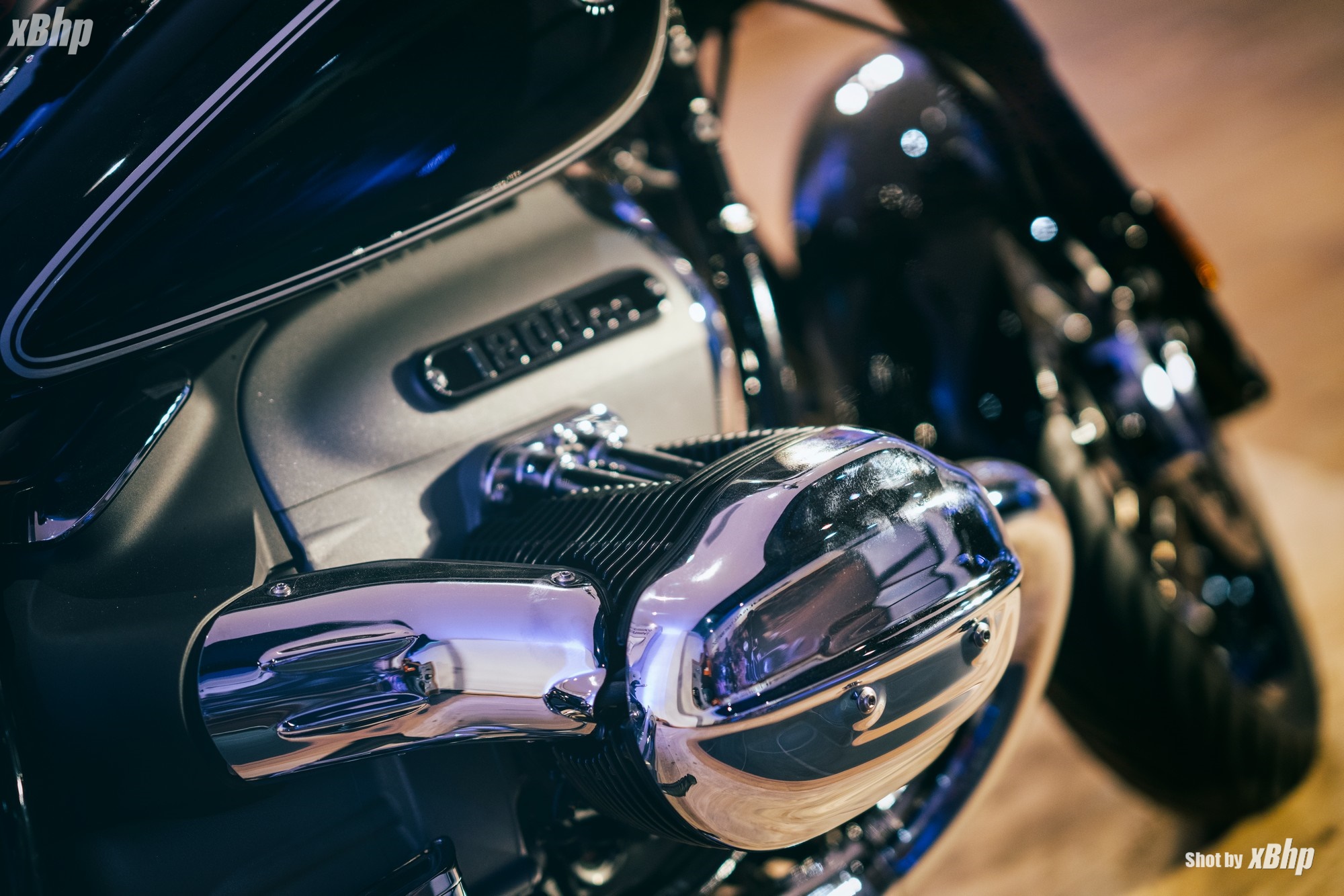 The massive wheelbase of 1,731mm and the 345 kg (wet) weight also help the matters. While the weight does look a lot on paper, the massive amount of torque available right from the get-go should help in alleviating the perception of weight. The wheelbase should also help provide stability to this behemoth at the speed that it is capable of achieving- over 180 km/h that is. The 16-litre fuel tank is a bit of bother though as the range may not be very cruiser-ish. Most of the big cruisers sport massive fuel tanks to go the distance but in case of the R18, the fuel-stops may be more frequent considering the size of the tank and the expected mileage. The BMW insignia finds itself in some very quirky places. The centre of the headlight and then, here. All the placements look tastefully done and it never feels overdone. It also shows the faith that BMW is putting in the R18 and we are quite sure that it is not misplaced. 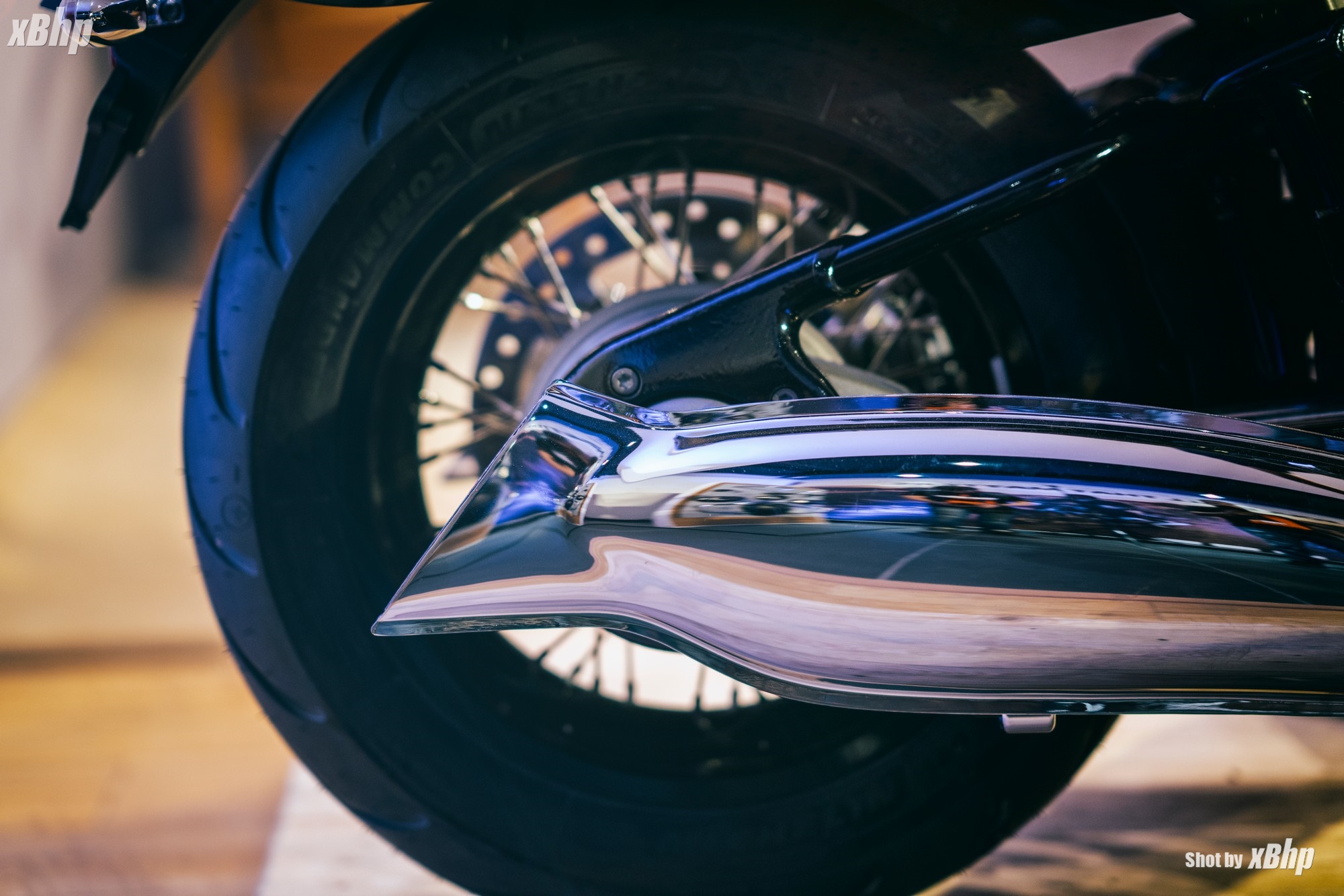 The exhaust is another element that needs to be noticed and appreciated. It has been wonderfully executed in terms of both, the design and function. Also appreciated are the 19” front and 16” rear combination of spoked wheels. The BMW R18 starts from $17,500 in the US which is around 13 lakh, we expect the price to be around the tune of 20 lakh in India. Despite seeming that way, the R18 is not the first cruiser from BMW. Once upon a time, there was an R1200C and then a smaller 850cc version of it as well. They never really picked up as the elemental cruiser design language was a little skewed. The R18 though is every bit of a cruiser and the backing of being Berlin Built only strengthens its case.

Dakar Rally 2021: All the updates in one place!