Italians for sure know how to respect their legacy and heritage. From Ducati naming their superbike – ‘Panigale’, derived from the Borgo Panigale region where Ducati is based in Italy; to Pirelli prefixing their tyres as ‘Rosso’, which means ‘Red’. This colour has an important role in the history of Italian racing, this was the colour assigned to Italy in the early car races, as was Green to Britain and Silver to France. Eventually the colour coding grew less important, but Italians made sure that whenever the world sees red on an automobile it reminds them of an Italian brand, be it either Ducati or Ferrari, and now even their tyres.

When Pirelli called me down to Sepang for WSBK, they said I could actually ride on track the very next day of the race! So a horde of journalists descended to watch the races over the weekend. We were thrilled to see Nicky Hayden ride like a god in the wet and lead by a considerable margin at the front in pouring rain. But while ogling at the riders skills in the wet (with the Pirelli rain tyres), we knew we had the next day to ourselves – in the wet. I don’t know about others, but I have a serious mental block about riding a bike on the track in rain. I have done more than enough touring in rain and snow on big bikes, but the track is a different ball game altogether. You can sure go slow, but then be ready to slide if you decide to follow that faster rider in front of you. Dial your racer ego to zero and enjoy the ride – that’s the funda!

And that is what I did, and boy was I glad. Though it did not rain incessantly as on race day, the track had some very dangerous and big wet patches, especially in the corners. Around five journalists fell, mostly on the S1000RRs, thankfully I was not one of them. They were mostly the fast of the lot.

Pirelli has done really well on the Rosso III tyres to improve its wet grip and ride ability in low temperatures; however there is only that much that one can do to beat physics

What was nice is that they had an assortment of various kinds of motorcycles for us to ride on the track and feel how the tyre responds. I rode the Ducati Hypermotard, Suzuki GSX-S1000, Ducati Monster 1200, Aprilia Tuono, BMW S1000RR K16 – in ascending order of BHP, and let me tell you things got progressively scarier. It was an absolute blast to ride the S1000RR in RACE mode on the track in those conditions. The bike just picks up speeds like no one’s business. All the time I was wondering what kind of level do riders like Nicky operate at to ride like that in rain.

My favourite on track was the Suzuki, while least favourite happened to be the Monster 1200 because of the odd rearset position being very close to the exhausts which prevented me adopting a racing stance on the bike.

While the S1000RR was scary, the Tuono was fantastic in the way it sounds and how meaty the entire powerband is. Here are a few photos of me negotiating the patchy track with caution. 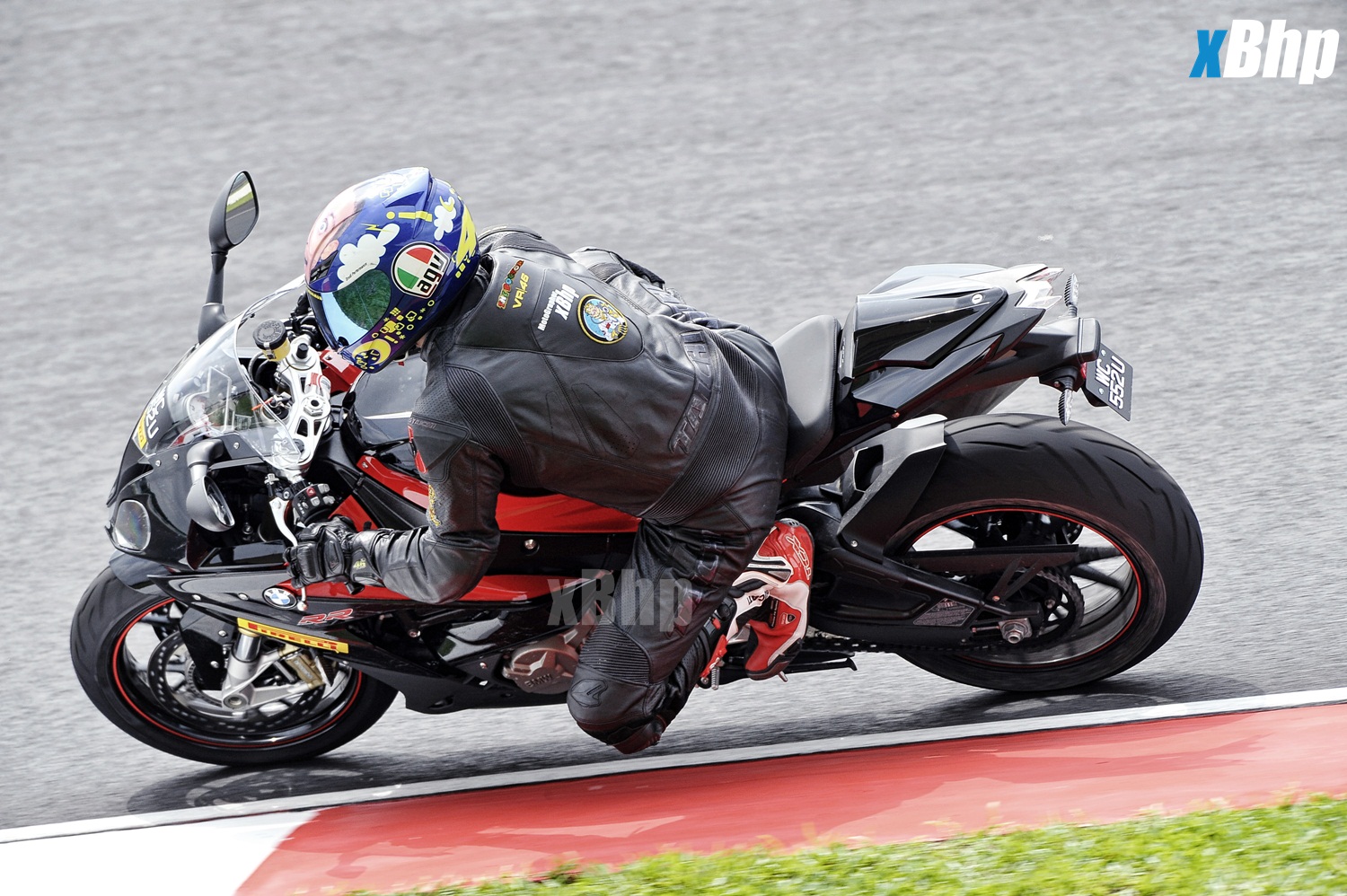 However, to see what these tyres can do we need to show you this duo – Jonathan Rea and Tom Sykes, the two nut jobs in WSBK for Kawasaki. Rea is the reigning WSBK Champion having won the title in his first year with Kawasaki. Sykes won the title in 2013 on the Kawasaki. The two are locked in battle this season for the title as well as being top dog in the Kawasaki team. A great rivalry which only adds to the drama for the spectators! And finally the journalists from all around Asia in one photo: And a few snapshots from the Sepang Pirelli Paddock: 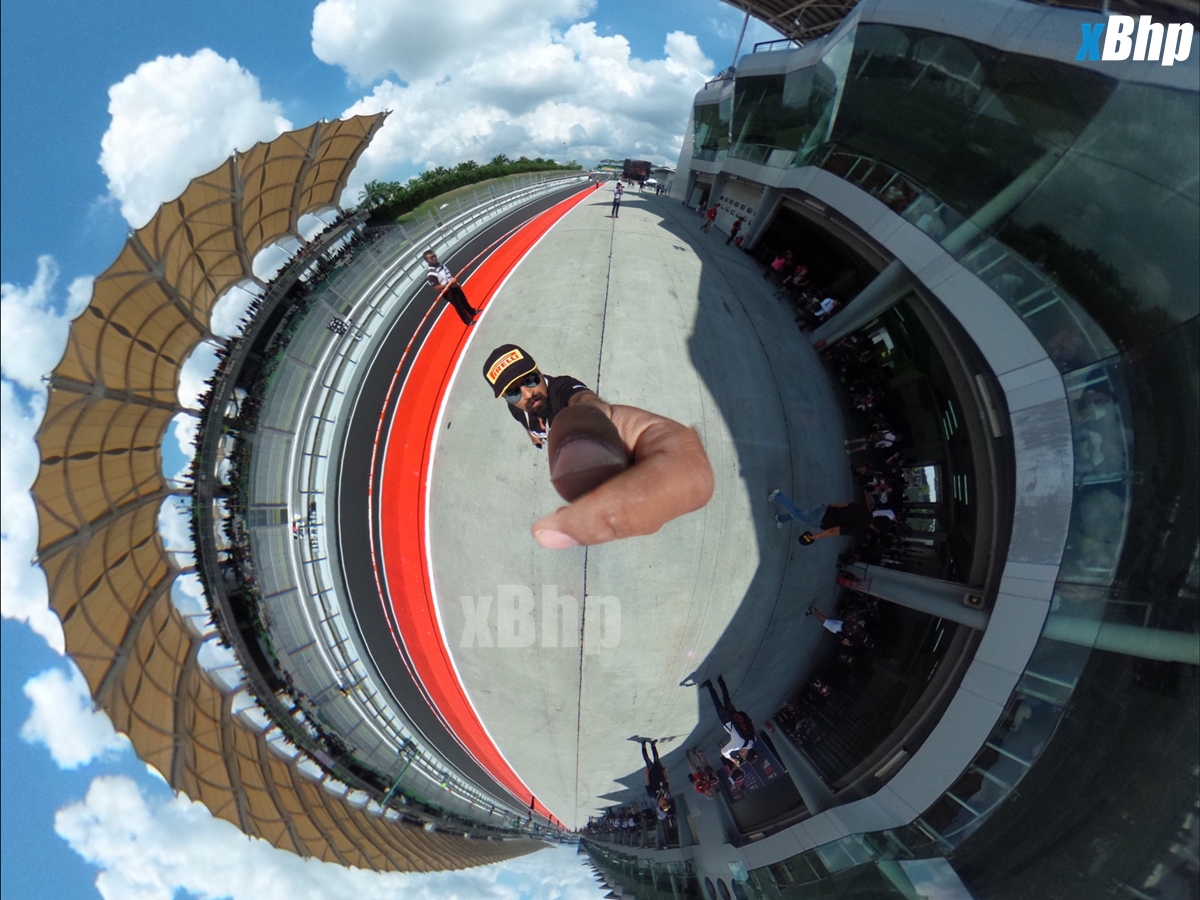 And a bit about the tyres:

Pirelli has been producing and selling the Diablo for almost 15 years now. And with the march of time, technology and development must keep pace. The Italian tyre manufacturer has done just that by winning in the pinnacle of production motorcycle racing, World Superbike. As the company often repeats, “We sell what we race, we race what we sell”. With 12 years of experience in WSBK, the knowledge gained there is transferred to the tyre that we will use on public roads. As a result, the Diablo series of tyres have traditionally been ‘sporty’, made for road use, but proudly wears its track lineage on its sleeve!

Pirelli Diablo Rosso II had built quite a reputation for itself, and the Rosso III raises the performance bar further. With the improvement in electronics in motorcycles and increase in power, it is imperative that the rubber we ride on also keeps apace. After all, the 200Bhp of lethal power your superbike produces is transferred to the tarmac through that small contact patch on the rear tyre. Without the correct rubber, all the power in the world would be unusable! But in real world conditions, riders aren’t just looking for full-blown performance, but something agreeable with the wallet as well. And this is where the Rosso III has taken giant strides, in building a tyre which excels in performance without sacrificing longevity. So you get consistent feel from the tyre, right till the point when it is time for a new set of rubber.

So what’s new with the Rosso III?

New profiles, new materials, new compounds and a tread pattern from track cousin Supercorsa. Well that is quite a lot! The rear tyre gets two compounds, to aid both corner carving and straight line stability. The profile of the tyre is made similar to the track oriented tyres, this greatly aids tipping the bike in faster into a corner. The ‘flash’ tread which the Supercorsa sports, is now also used on the Rosso III. To top it all, Pirelli says that wet grip also has improved significantly over the Rosso II.

So who is the tyre built for?

The tyre is best suited for those who intend to ride on the streets, but don’t want to stop having fun on their superbikes! Perfect for use on nakeds and superbikes and even for sports tourers looking to have a blast while touring with luggage or even a pillion on board! The tyres are good enough for those who would like to enjoy a rare track session as well. The improved handling in the wet makes it suitable for those long rides where the weather is forever an unknown!

Pirelli allowed us to take a peek into the thought process that went into developing the tyre and why were the changes made.

The Fast Flash Gordon! The flash pattern tread used on the Supercorsa was employed here as well, because of the compactness of the tread strip, a good balance between full and empty spaces and excellent drainage of water. The orientation of the grooves follows the waves of wear, interrupting the forces that cause it, favouring more uniform consumption and a reduction of the stress to which the compound is subjected. The Void/ Fill ratio on the Rosso III is 9.5% at the front and 7.5% at the rear.

Compounded Interest! Silica is the magic word here, lots of it! The compound uses a high percentage of Silica with latest generation oils, resins and polymers. The rear tyre uses a dual compound. 40-20-40, is how the compounds are distributed. The two 40s being the sides, while the 20 is the centre. The sides use a compound which is 100% silica formulation, for fantastic grip while leaning the bike through a corner. This side compound is supported in the substratum by a harder compound which provides stability and precision through the corner. This substratum compound on the side is used in the centre on the surface. This also employs more than 70% silica. This helps the tyre remain stable at high speeds and also increases life. The front tyre on the other hand uses a single compound which is 100% silica. The reason for this is because, the front is instrumental in taking a corner and the rider needs consistency while tipping it in. A dual compound would mean a change mid-corner which could be disconcerting for the rider while pushing the front hard.

Rubber Profiling! The profile, as with the flash, was derived from the Supercorsa. So the rider has a larger contact patch while cornering. This also aids rapid direction changing, a boon in the chicanes on track! Compared to the Rosso II, the Rosso III has a profile which is higher in the central part by 2-2.5% and wider at the sides. The sidewall height has also been increased by 3 mm to give more flexibility of the sidewall in acceleration out of corners.

The Hidden Truth! That part of the tyre which we do not see and often forget to compare when selecting a tyre for our motorcycle. The carcass plays an equally important role as does the compound of your tyre. The radial casing on the Rosso III is very rigid to maintain the profile and helps the softer compounds to easily grip the tarmac. Again, this has trickled down from the Supercorsa and is made from high-performance Rayon. The density of the belt has also been adjusted. Get your Pirelli Tyres in India at select CEAT Stores now!