Whenever I am brooding by myself, I think about how fortunate I am. I mean that in regards to motorcycling, of course. Whenever I feel like my day-to-day life is getting a bit much to deal with, all I have to do is ride and it sets me free. I am sure many others like me feel the same way and in that sense, we are all quite fortunate. This is the story of another time when life got a bit much to deal with and I did what I was supposed to do- ride. I have been associated with xBhp for a long time now and I have taken up many rides for xBhp. Sometimes reviewing motorcycles or motorcycle tyres in the process. This ride of mine was for the latter. I have been aware of the #xBhpJKSmartRides project for a while and finally, I decided to apply for it. I shared my itinerary with them and soon enough, I got a positive response from them giving me the go-ahead for the ride.

Sagar Banerjee is a long-time xBhpian and an ardent motorcyclist. He has ridden with us quite a few times but he also has some solo rides under his belt including riding to the revered Mustang Valley on a supersport machine. Know more about him on his channel linked here.

As for the destination, there wasn’t a fixed one. For a long time now I have been thinking about exploring The Dooars, the alluvial floodplains in the northeastern part of India. Situated in the south of the outer foothills of the Himalayas, the allure of this place finally got the best of me. The Dooars encompass the northern part of the Brahmaputra river basin. As for the expanse of the region, the Dooars is spread across around 30 km and spans from the Teesta River in West Bengal to the Dhansiri River in Assam. Another name given to the Dooars is The Gateway to Bhutan. That is about the region. I chose it for two reasons; first because I wanted to do it for a while and second because it would offer me a lot of opportunities to really put the tyres to test. For this ride, my steed was the TVS Apache RTR 200 4V and for the tyres, I went with JK Tyre Blaze RYDR tyres; BF44 90/90-17 for the front and BR43 140/70-17 for the rear. Now, another add on to these tyres was the TREELCARE kit that turned these tyres into SmartTyres. Now it was time to start the preparation for the ride. My RTR 200 4V was a little banged up due to a mishap but for the most part, it was ready to go. I got the tyres replaced from a nearby JK Tyre-Steel Wheel. After removing the old tyres, the executives at JK Tyre-Steel Wheel wrapped the TREELCARE sensor around both the wheels and installed the tyres. After all that, I just downloaded the TREELCARE App and scanned the QR Code from the box in which the sensor was packed. With that, the tyres transformed into SmartTyres and now I could monitor all the vitals of the tyres on my smartphone; neat and nifty. And now, it was time to begin the Dooars Jungle Ride. As always, the night before the start of the roadtrip was mostly devoid of sleep; excitement can do that to you. Regardless, I woke up early and decided to start towards my first destination- Jaldapara Wildlife Sanctuary. It is a National Park situated on the banks of the Torsa River. Spread across around 216 square kilometres, the Jaldapara National Park is a grassland with scattered riverine forests. It also holds the distinction of holding the largest population of Indian one-horned Rhinos in the state. Jaldapara is nearly 120 km away from Siliguri, my hometown and the starting point for this ride. Since the distance was not a lot and could be covered in around 3 hours or so, I decided to stick with a leisurely pace. This would not only let me have ample photo opportunities but also allow me to relax and enjoy the beauty of the region I had wanted to explore for a long time. Once I was past the hustle and bustle of Siliguri, all I had to work with was good roads and lush greenery all around. Teesta Bridge was a sight to behold as always. I took a decent number of breaks and spent a lot of time not only taking photographs but just drinking in the beauty of the route. During this part of the journey, I mostly encountered decent roads. That and the added peace of mind due to the tyres being smart, I was able to run in the tyres and get used to their mannerisms as well. I found the Blaze RYDR tyres to be very reliable and predictable on the tarmac. Be it braking or acceleration, they never let go of the intended line despite being brand new. And things kept getting better as I put more kilometres into them. Not being pressed for time has its perks but it does come with a few self-inflicted problems. I lost track of time in between the many breaks I took and as a result, I reached Jaldapara with just enough light to get me by. Now, it was time to rest for the next day. On Day 2’s agenda, I had two places to cover, spread over a span of around 90 km. The first one was the Buxa Tiger Reserve post where I was to head to Cooch Behar, my destination and stay for the day. This day was dedicated to only exploration but some serious testing of the tyres as well. I had multiple opportunities to test the cornering, wet grip, and even off-road performance of these tyres and got to see the Smart Tyres work their magic! The route from Jaldapara to Buxa Tiger Reserve consists mainly of well-built roads. There are some sections where you can really put the cornering prowess of the tyres to test. As expected, the Blaze RYDR tyres offered all the grip I needed to exploit the fantastic handling characteristics of the Apache RTR 200 4V. They warm up quickly and after that, there’s just loads of grip and confidence that they instil within you. Due to the good road conditions, I reached in around an hour, so I had enough time to explore. There’s just something about the wilderness that sets you free. The jungle was our home before the concrete jungle took over. Perhaps that is why being in the wild clicks with something visceral. After exploring the forest for a bit, it was time to do that with my motorcycle. Neither the motorcycle I was riding is meant for offroading, nor were the tyres. And yet, I had a lot of fun and I can say that these tyres can definitely hold their own when the going gets rough. From Buxa, I was to head to Cooch Behar which was my destination for the day. After multiple photo breaks, I reached Cooch Behar with some time to kill. So, I went to explore the place and also, to see how smart these Smart Tyres actually were. Tyres are something we seldom pay attention to unless they decide to give up on you.

With the Treelcare app and its monitoring, it becomes easier to keep a track of your tyres’ vitals. Seeing the tyre temperature rise as I rode on the tarmac and seeing it go down after I hit a wet patch was like magic. And predictably, the tyre pressure rises and drops as well. Stuff like this can help one gauge the amount of grip one can expect in accordance with the shrinking or expanding of the contact patch based on the tyre pressure. A lot of science, eh? Now imagine the complexity in designing a system like this that actually works! Coming back to the roadtrip, after exploring Cooch Behar and the features of these Smart Tyres, I decided to have dinner and head to my stay. In terms of tackling varying conditions, this was the most tedious day, at least relatively. Gorumara National Park is around 3 hours or 120 km away from Cooch Behar. Gorumara is another national park in the region known for its population of Indian Rhinos. Not native to the place, but Bengal Tigers have been spotted here as well. Fortunately or unfortunately, I did not encounter one. The route from Cooch Behar to Gorumara is mostly alright but there are some patches of broken roads. But even then, the ride is mostly enjoyable because of the natural beauty of this region. My ride went smoothly and again, I was left with some time to explore the place. The Gorumara National Park itself does not have any human population but there are plenty of ethnic villages around the area. 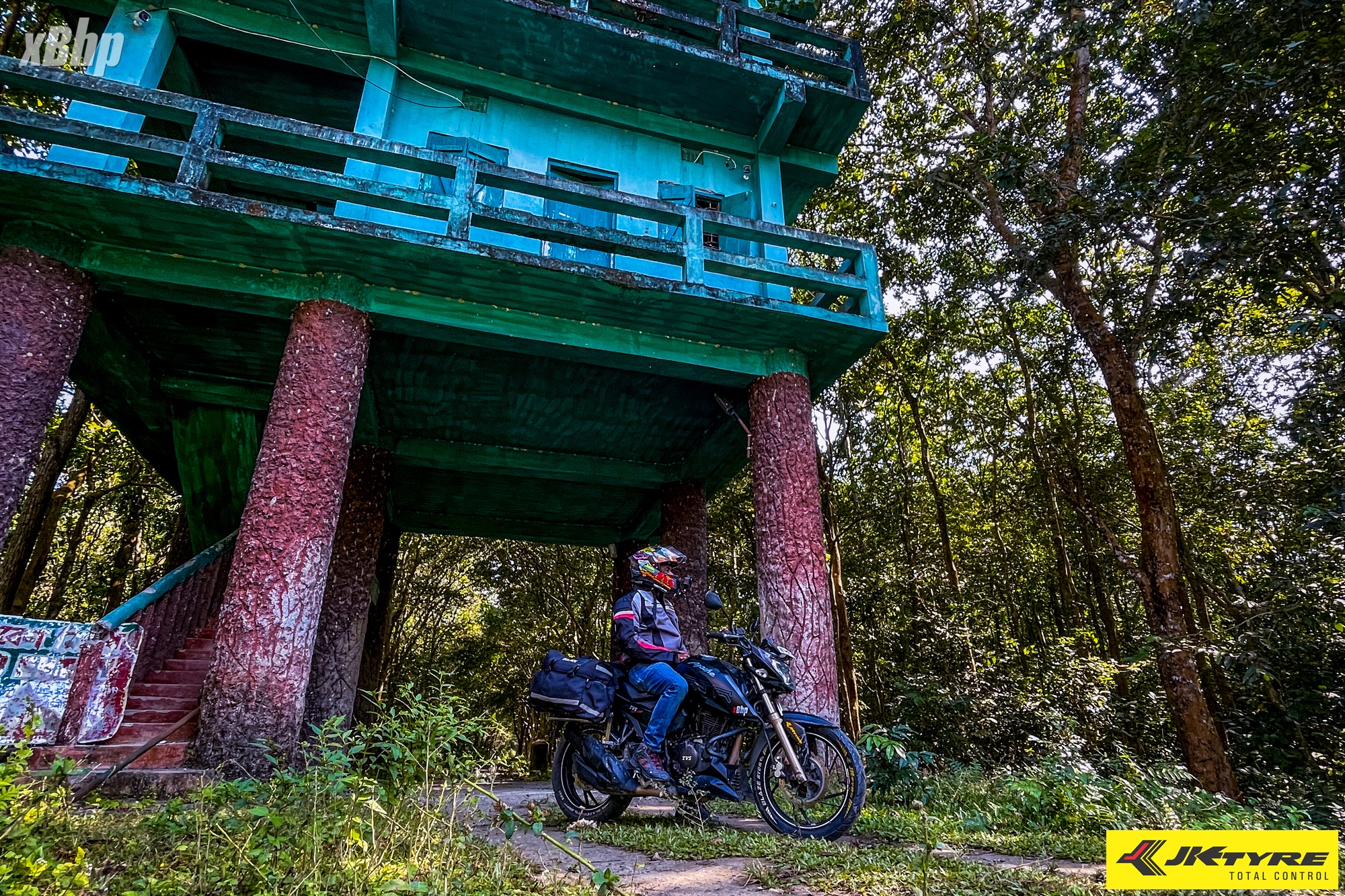 For the most part, I spent my day in the forest and also visited a couple of villages around it. Some local delicacies and a lot of personal-safari later, the sun went down and I decided to head to my stay. Siliguri was just around 70 km from Gorumara and I left for home late in the day after exploring some more of Gorumara. This may have been a rather short ride but what it lacked in kilometres, it made up in the experience. I was surely feeling better heading home after the ride as this little escapade had done enough to alleviate the significant amount of stress I was under. But then again, that is why we all love motorcycling, don’t we? Until next time. 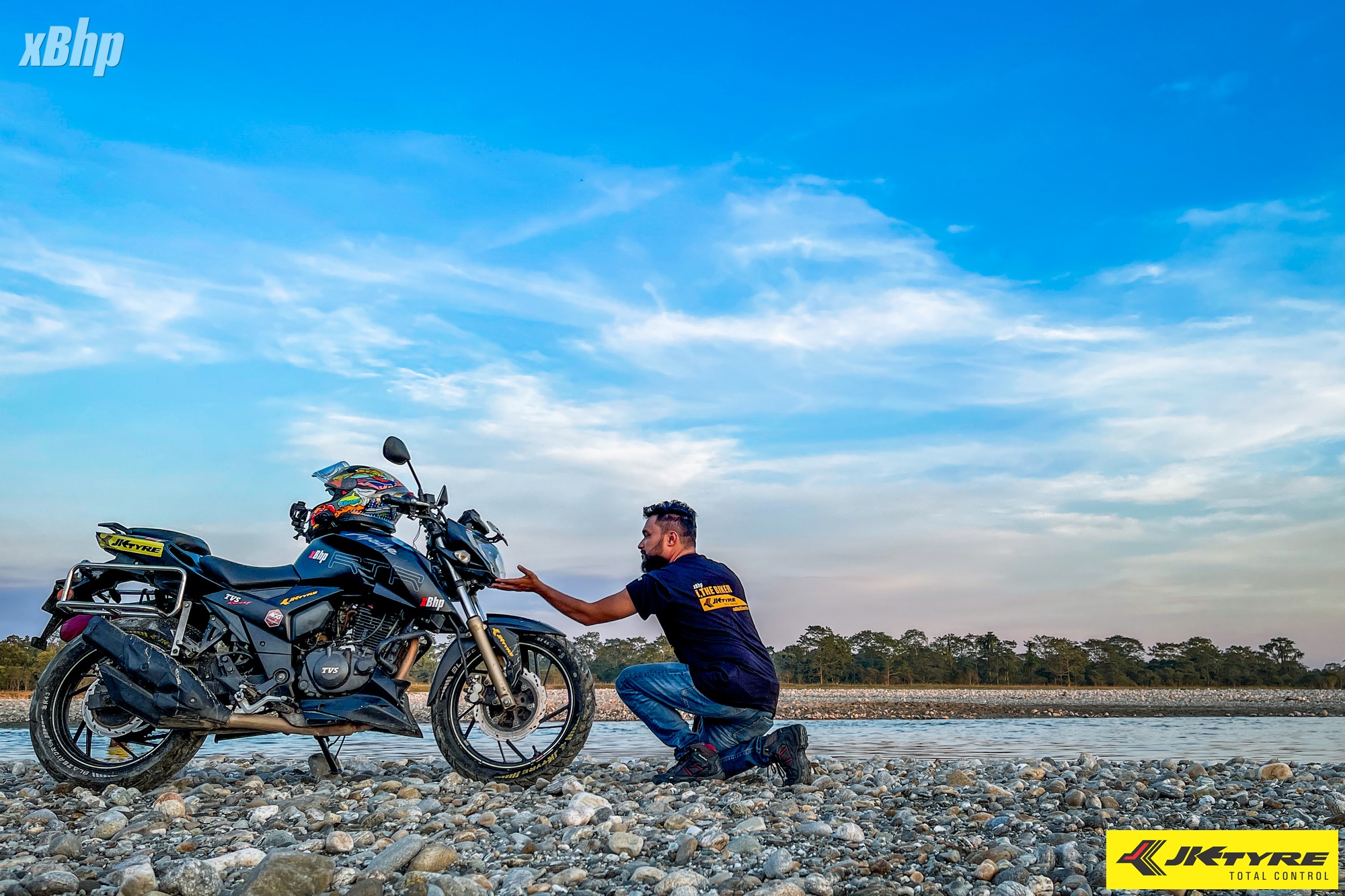 The first thing I’d like to address in terms of the tyres is the technology that has made them Smart Tyres. Gone are the days when tyre technology was limited to tread design and the compound used. Nowadays, manufacturers are adding more features to tyres. Among the many, I feel like the Smart Tyre tech from JK Tyre is one of the most significant innovations in recent times. Being able to monitor the tyre pressure, tyre temperature etc. is one thing but it is the simplicity of the execution that impressed me the most. A simple sensor tied around the wheel and connected to a smartphone app; is all there is to it. And after this simple process, you literally have the real-time information regarding your tyres available at your fingertips. About the tyres themselves, I have been a fan of the Blaze RYDR series for a while now. I have used them on my KTM RC 390 and they were just as impressive on the RTR 200 4V as well. From grip on the straights to the confidence in the twisties; these tyres offer everything one can ask for from a set of sports touring rubber. As a plus, due to the innovative tread pattern, these tyres offer really good wet grip as well. All in all, these tyres seem like a really good deal standalone but with the Treelcare kit, they are nearly unbeatable in the segment!