The #18YearsOfxBhp celebration is in full swing. Our garage is a testament to that. All the vehicles sport a special livery to celebrate xBhp reaching adulthood. From the Hayabusa to the Ninja H2, from the FTR 1200 to the Rocke 3 R; all are draped in this unique Black Mirror-Gold livery with splatters of Carbon Fibre here and there. And going by the love we have received for these, we think that this special livery has hit the right spot. Despite all that though, we still felt a void. After all, when it comes to motorcycles, we motorcyclists don’t know when to stop! So we had a plan. We asked you guys to help us think of one more vehicle that we could drape in this livery and culminate the celebrations. An overwhelming majority of you suggested that the only motorcycle that could be the icing on the proverbial cake was the TVS Apache RR 310. And as we always do, we obliged. Now, the Apache RR 310 is no stranger or newcomer to the Indian market. It has been around for a while. And in that time, it has established itself as a brilliant performance machine capable of both racetrack exploits and sports touring. More than anything though, it has unanimously established itself as not only the most beautiful motorcycle from an Indian manufacturer but one of the most beautiful among all the motorcycles that we have in the Indian market today.

Knowing that it is not hard to guess that this was not an easy task. The TVS Apache RR 310 is a precisely and artistically crafted motorcycle. It is very easy to mess it up completely. So we decided to take our time with it. And after multiple digital renditions, we finally settled on one. That is the one that you see here. As you can see, the #18YearsOfxBhp Special livery on the Apache RR 310 is easily our most comprehensive and complex one as of yet. There’s lots of black chrome, there’s lots of carbon fibre, and there’s a whole lot of gold. It is extremely easy to get lost when you have a motorcycle with a design as complex as the RR 310’s and on top of that, a livery as detailed as that. Fortunately though, we were able to manage it and gauging from the response that we have got for it, it doesn’t look half bad (humility 101). 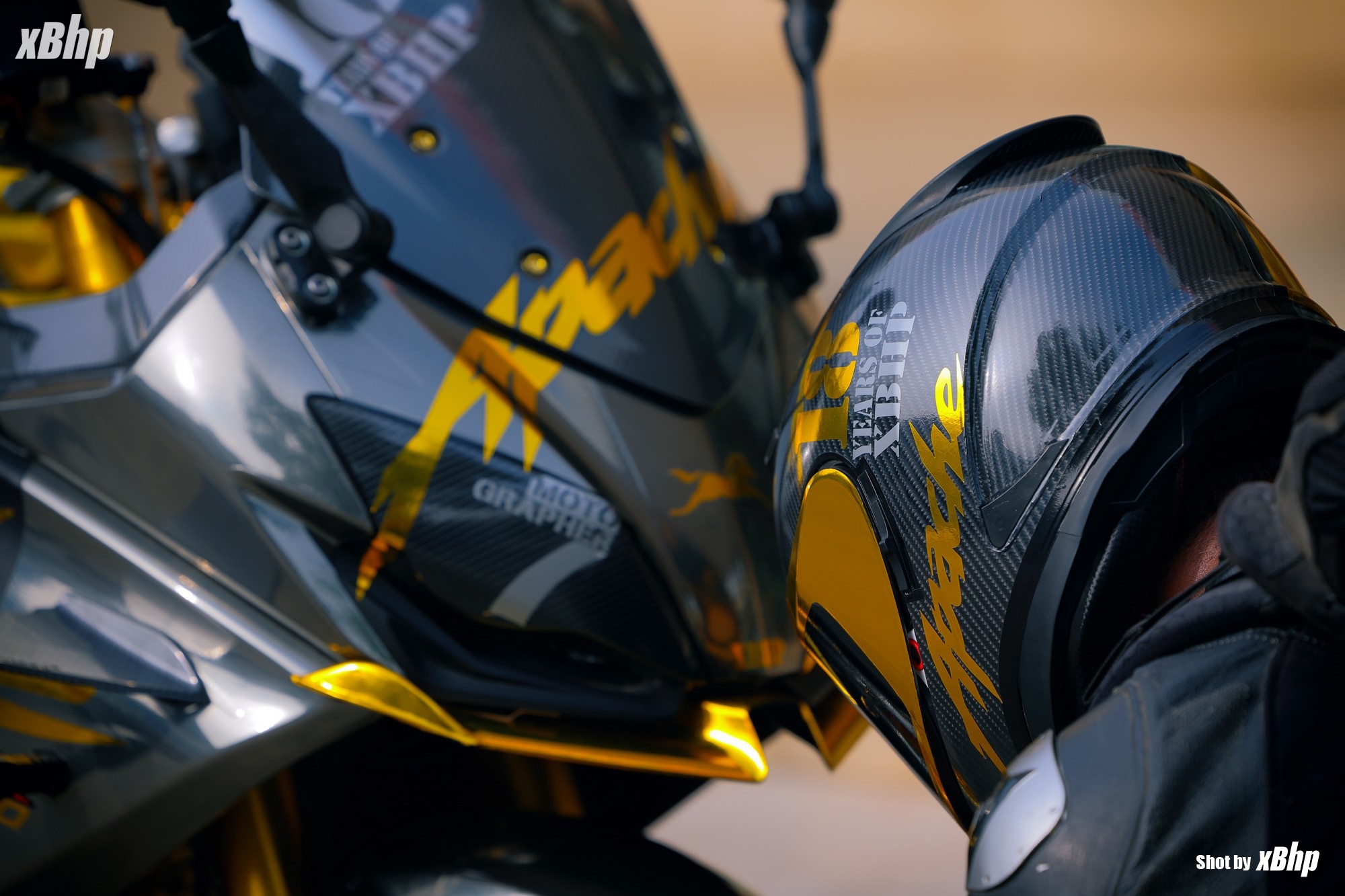 Starting from the front, the first major change that one will notice is the addition of wings. And not just one pair but two. Thanks to SkyBoyShop, we found exactly what we wanted and the solutions were Plug’n’Play so there was no hassle at all. The first pair sits under the beautiful headlamps of the Apache RR 310 and it has been finished in gold. The second pair fits on the fairing and that one has been finished in carbon fibre. Coming to the twin headlamps, we decided to offset the golden finish of the right one with a carbon fibre finish on the left. Coming to the decals, the logo of TVS, the xBhp text under it, and the Apache insignia have been finished in gold. Then, to add further contrast, the 18YearsOfxBhp logo and MotoGrapher logo are matte grey. Lastly, the front fender gets black chrome treatment to tidy up the front nicely and also because it sits nicely with the already golden USD forks of the Apache RR 310. Those who noticed may see that our RR 310 also features a custom radiator guard which is also finished in gold. Coming to the side, the base was to be black chrome but this is where it needed the most precise and calculated garnishing. And as we mentioned, we had to be thorough. So the fairing was finished in black chrome and the tank was finished in carbon fibre. The tank cowl towards the front though got a golden treatment. Along with that, the shroud around the console and the bar-end weights too received a golden treatment.

The inside layer of the fairing and the exposed frame’s golden finish is complemented by the large Apache insignia which is finished in gold too. Now, to denote the occasion, a large matte black ‘18’ covers most of the fairing and some of the tank below which xBhp has been written in gold. The wings on the fairing also feature a small TVS Motor Company logo in gold as well. Below the golden Apache insignia, the ‘RR’ is in red and ‘310’ is in gold. The red not only breaks the monopoly of the three schemes that are prevalent in the design but also goes well with the obscured but visible top cover of the cylinder head which, in the stock trim, is red. Moving towards the rear, the tail section is wrapped in black chrome with dashes of gold. One of the best touches when it comes to the design of the Apache RR 310 is that fin of sorts under the tail section. The design is inspired by Akula which is Russian for shark- neat touch indeed and that is why it deserved some gold. There’s also a 3D Apache insignia that is added to the tail section which, to keep things consistent, is finished in gold.

Behind the rider seat, the bodywork around the faux air intakes has been finished in gold and the rear seat cowl, which we procured from SkyBoyShop, gets a carbon fibre treatment. Now we move on to the exhaust. While the main canister remains in its matte black finish, the heat shield was draped in carbon fibre. The tip of the exhaust, which is brushed metallic in stock trim, was draped in gold. And finally, the wheels… electroplated in gold! The motorcycle looked good on our screen when we were adding the final touches during the designing phase. But in the flesh, it looks even better. Much of the credit goes to TVS Motor Company for making such a beautiful motorcycle, one that was so rewarding to work on. Then we have to thank SkyBoyShop for the fantastic add-ons that they sent us for our #18YearsOfxBhp Special Apache RR 310.

Oh, we almost forgot. As is customary for us, we also have some accessories to match the panache of the motorcycle- a paddock stand finished in gold, a backpack that amalgamates carbon fibre and gold, and an Axor Street helmet wrapped in Carbon fibre with golden accents and insignias.

You can check out our review of the TVS Apache RR 310 here.