Ever since the COVID-19 outbreak, the entire world has come to a standstill. Everyone has been anxious to resume their pre-COVID routine in life, bikers even more so. Finally, the day came when we could step out from the confines of our homes, geared up for much-needed mountain air. We decided Lansdowne would be the perfect destination for it. We spent a busy day organising everything needed for the trip such as COVID test reports, backpacks, riding jackets and gears, and most importantly, the tyres for the bike. There are many choices of tyres when it comes to our KTM 200 Dukes, but after hearing many good things about the CEAT Zoom Rad X1 tyres, we decided to give them a go. We got the CEAT Zoom Rad X1 F 110/70R17 at the front and CEAT ZOOM RAD X1 150/60R17 66H at the rear.

Turns out that it was one of the best decisions we made for this trip. These tyres are easily one of the best tyres of KTM 200 Duke and in turn, for all the KTMs from 125s to the 390s. More on that later and before moving further, we would like to thank CEAT Tyres India for providing us with this stunning set of tyres. As many travellers would agree, the night before the ride is generally restless and mostly sleepless. We were even more excited as we’d get to test this new set of tyres in the mountains and serpentine roads where they belong! We started early in the morning after making all the arrangements and were raring to go. We beat the traffic and hit the highway only to realize that we were heading in the wrong direction. In order to save time, we had to take a rather beaten road to get back to the right road.

The trip presented a rather tough test for the tyres at the beginning itself. A great set of tyres can really help you save some time even if the roads are less than ideal and the CEAT Zoom Rad X1 tyres can do that without breaking a sweat. Anyway, after some help from the locals, we were able to find our way back to the highway- or should we say a wet highway. The rain had decided to play spoilsport and we were not going to let it dampen our spirits. While the tyres themselves did not seem like they needed breaking-in, we still rode at an easy pace in the beginning just to be on a safer side. We love how much confidence these tyres inspire even on wet roads. The tread pattern forms an easy channel for the water to be dispelled from under the tyres and therefore, even at a decent pace, it never felt like the tyres had lost contact with the tarmac. We were already impressed with the CEAT Zoom Rad X1 tyres. 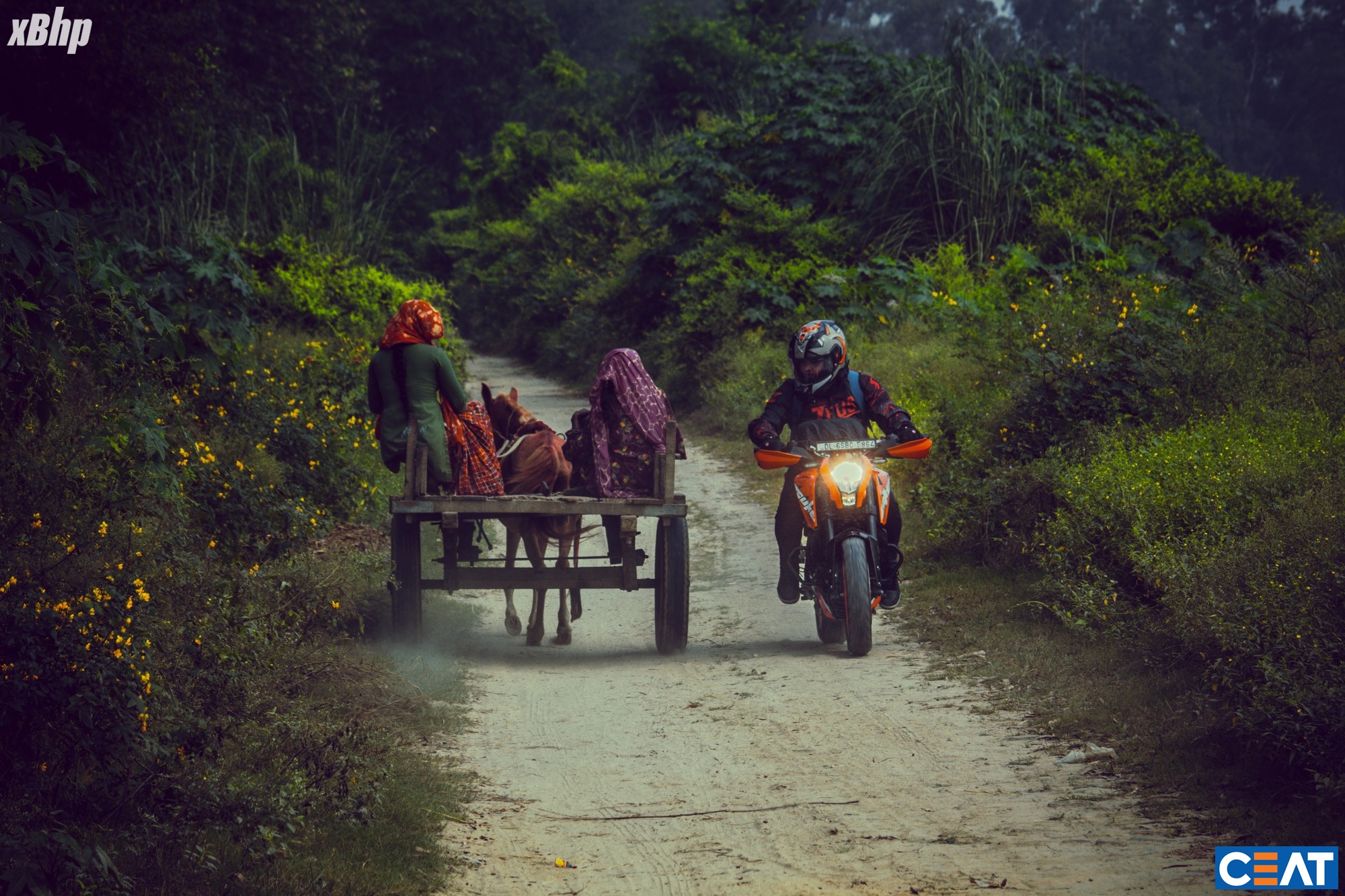 Moving on, we finally reached Uttarakhand after riding for almost 200 km. At the border checkpost, we were stopped by the local police to check for our documents. They checked everything from the bike’s documents to our COVID-negative certificates and it took a while. After around 30 mins, we got the permission and we were back in the saddle. But before we continued our journey towards Lansdowne, we decided to take a little break. After refuelling ourselves, we hit the road again. The beautiful, zig-zag, greenery-laden mountain roads of Uttarakhand dotted with streams and bridges made us realize why we love motorcycling so much.

After all, tackling corners is the bread and butter of a motorcyclist. And this was another department where the tyres impressed us. CEAT Zoom Rad X1 tyres are very steady under braking. That, in turn, helps you shed speed quickly and with confidence so that you can place your motorcycle exactly where you want it and track the desired line through a corner. As greenery got denser, we knew that we were nearing our destination. We were surprised to realize that we were still around Kotdwar and Lansdowne was still a good 30-35 km away. Talk about the journey being just as beautiful as the destination. We reached the Lansdowne checkpost around 1 PM. It is there that we got to know about the weekend lockdown and we were crestfallen. But since we had the required paperwork, a little convincing was all it took for them to let us through. Then after around a km or so, there was another checkpoint but this one was under the wing of the Indian Army. They enquired about the purpose of our visit, checked the related documents, and after a brief review, allowed us to visit the city center of Lansdowne where our stay was scheduled. Since it was our first time visiting Lansdowne, we were having some trouble finding the hotel. The lacklustre mobile coverage wasn’t helping matters either. But the friendly locals turned out to be a big help. After around 15 more minutes of searching, we found Hotel Mayur, our stay. Its location in the city center would have been ideal if the lockdown was not in place. All the markets were closed so there was not a lot to visit or explore.

We parked our bikes and after the formalities at the hotel, we went straight to our room and crashed on the bed. Despite not feeling that way when we were on the road and having fun, it was a tiring day. We thought of going out after lunch only to be reminded of the lockdown. So we spent our day staying at the hotel and hoped for the coming day to be more forgiving. When we went to sleep on Day 1, we had decided to wake up early. So we were out of our beds at 6 in the morning and made a beeline to the terrace, to catch a glimpse of the beautiful mountainous morning, with the fog and clouds and little streaks of sunlight. The entire village of Lansdowne was surrounded by mountains, and the cherry on top was when it started raining, pushing the temperature down to 16 degrees. What more can a biker ask for? We also lucked out and got to see the morning parade by the Army, but unfortunately couldn’t record it as it was restricted to do so. After freshening up, we decided to explore the place, bags packed with our cameras, and all geared up. The bikes required some cleaning due to the cold and evidently some fueling too for which we had to go back down around 20-25kms. We made the most of that too and captured some photographs. We were also happy to see the lockdown had been lifted so we could easily come and go. After refuelling the bikes, we headed back to Lansdowne and decided to visit the first place, St Mary’s Church. This church was quite old and we were impressed to see that its beauty had been well maintained by the local military. This Catholic church, with immense historical importance, is located near Tip N Top Point in Lansdowne. After some shots of the place, we went to another place called Bhulla Tal. It was quite heartbreaking to see that due to the pandemic, the entire lake had dried up.

We made a quick trip back to the hotel for breakfast and checked with the local people to see if there’s any special permission required to visit other places. Lansdowne is a very sophisticated area, managed by the Army. We were told that while no such permissions were required, certain areas did prohibit cameras. We decided to visit another place, Tip N Top. It’s a small hilltop viewpoint in Lansdowne, one of the highest places there. We could see the little huts, trees, and roads at this height. Next on the list was the War Memorial known as the pride of Garhwal Rifles and one of the main attractions in Lansdowne cantonment town. We also visited the Garhwali Mess which is one of the oldest buildings situated in Lansdowne district of Pauri. We were unable to click any pictures in either of the places as it was prohibited. While on our touring spree, we had to brave some tough roads too. Because of the rain, there were some really wet patches and the road was quite slippery in some places. It is a challenging task on a motorcycle but with the right tyres, or should we say CEAT Zoom Rad X1 tyres, it is much easier. So much so that we had even forgotten the kind of roads that we were riding on. And the tyres that make you do that are the best kind. We headed back to our hotel and talking about the hotel, it was one of the best experiences we have had. The staff was professional, and the food and service absolutely smashing. The hotel is for pure vegetarians though. The hotel owner was extremely nice and guided us as much as he could. All too soon, it was night and although we wanted to get a few sunset shots, the fog proved uncooperative. 5:30 in the evening felt like 2 in the night. We thought of going to the markets instead but because of the lockdown, we resigned to coffee on the terrace. After dinner, we packed up with long faces but a solemn resolve to visit this place again. Remember how we had mentioned that choosing the CEAT Zoom Rad X1 tyres was one of the best decisions for this trip? Here’s why. First, the radial construction of the tyre. Because of that, they are much sturdier, much less prone to deformation and maintain a wider and consistent contact patch with the tarmac. Second, the compound used. The CEAT Zoom Rad X1 tyres get up to temperature quickly and after that, it is just loads of grip. Whether you are doing considerable speeds on the highway or tackling corners in the mountains, the grip is phenomenal and the handling of the Duke 200 felt even more responsive, poised and confidence-inspiring. And finally third, the performance in wet conditions. As mentioned earlier, the radial construction makes these tyres less prone to deforming but in the rains, another issue that the rider has to deal with is aquaplaning. But with the tread design, the CEAT Zoom Rad X1 efficiently dispels water from under the surface of the tyres. For roadtrips like this which feature some spirited riding and rain, these are one of the best tyres for KTMs and since they all have the same size, the CEAT Zoom Rad X1 tyres can be fitted on KTM 125 Duke, 200 Duke, 250, 390 Duke, RC 125, RC 200, and RC 390! We woke up early and started packing our backpacks. We also checked our tyres since they had taken quite some abuse and needless to say, they looked in perfect shape and were more than ready for some action. After washing the bikes and lubing the chains, we loaded up the Rynox tank bags. Before checking out, we had a little breakfast and said goodbye to everyone. We also asked the hotel owner for routes since we had gotten lost earlier. Finally, around 8:00 AM in the morning, we checked out and started our return trip to Delhi.

We encountered some gorgeous landscapes and took a short break to capture them the best we could. Then, we reached the first checkpoint of Uttarakhand where we were stopped by the local police for some documentation.

We reached Bijnor by 12:30 PM, then took a little break again because of the scorching heat and the sunlight beating down on our helmets. After that we covered the distance to Delhi in one go, reaching around 2 PM. Despite being marred with some difficulties, this was a satisfying weekend getaway and we could tell we were ecstatic because as we unloaded, we could hear the mountains calling out to us again.