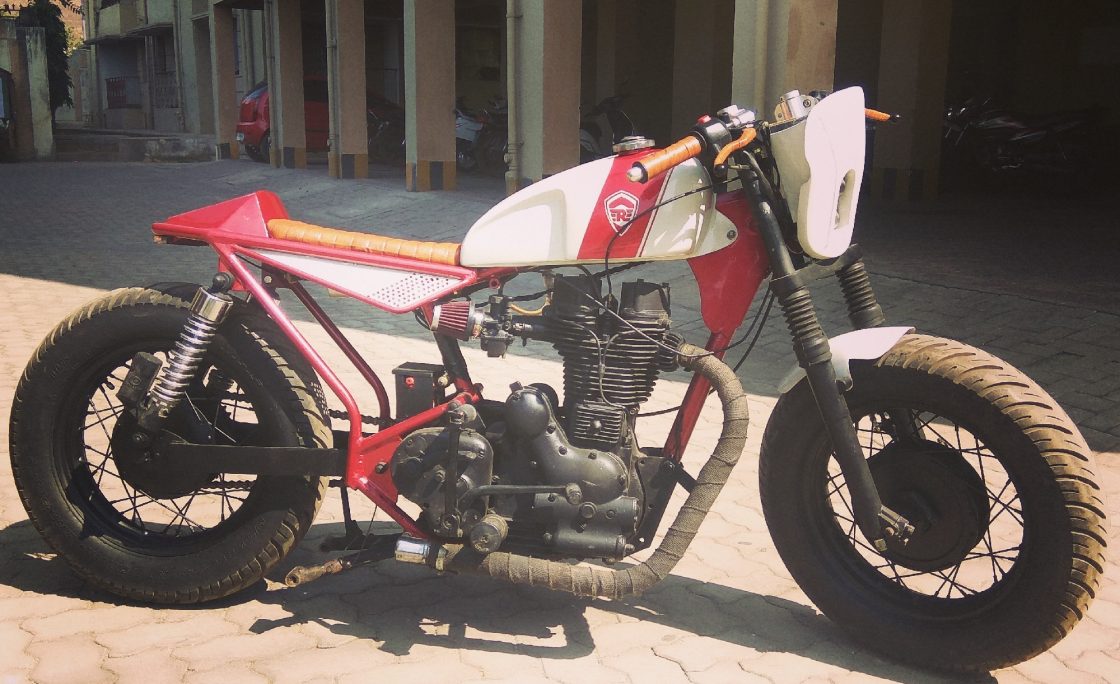 Being able to live our dreams and do what we love to do is a wish that most of us share. But only some are willing to do what it takes and pay the price for that life. It takes a lot of courage to choose a ‘road less travelled’ and commit yourself to it. But if one manages to do that, greatness awaits on the other side. This story is the story of a ‘motorcycle designer’, Arpan Pandey and his dream Bespoke Designs.

Arpan Pandey belongs to a small in the suburbs of Dhanbad. He studied automobile engineering and worked as a trainer of high-end cad cam software at Tool Rooms in Bhubaneswar. While a secure and respectable job like that satisfies anyone, Arpan never found the satisfaction and excitement that he was seeking. And so, he decided to let go of his 9 to 5 to do something he wanted to do… custom motorcycles. He established his own firm, Bespoke Designs, in June 2016, 6 months after he left his job. The name, Bespoke Designs does stand out among the names of other custom houses around the world. The reason, as explained by Arpan himself is that he did not want to confine himself to just designing motorcycles and that is why he did not want to use the word ‘custom’ so that he could look into expanding to minimalist arts and crafts, furniture design in the future as well. According to Arpan, his father had been very supportive and as a silent homage, he thought of the alphabet B, the initial of his father’s first name, to settle for a name of his firm. After a lot of research, he settled on ‘Bespoke’. He could relate to the name and he felt that it was a strong word that carried a weight about itself. He is also of the opinion that all that the word ‘Bespoke’ signifies’ is everything there is to know about him.

The journey to motorcycles

During our interaction with Arpan, he also told us that Motorcycles were something destiny led him to. He did not have a background in motorcycles and motorcycling and his entry in this world was sudden. But then, he also refers to it as the best thing that has happened to him. He went on to say, “Getting into motorcycles was a challenge as I lacked a background there but I am stubborn that way. I grab the tiger by its tail and don’t let go. Anyway, I may not have had a background in motorcycles but what I had was an eye for design. I wanted to design vehicles and I had limited resources. So motorcycles seemed like the gateway. And once it got down it, I was hooked. I love the process, the journey, and so, that’s all I have been doing.”

The story of his first build is an interesting one. Arpan started working on his first motorcycle right after his college ended, in 2013. But the problem that he did not know a lot about building motorcycles. His father owned a Yamaha Enticer and that turned out to be Arpan’s first lab rat. Grabbing the proverbial tiger by its tail, he bought an angle grinder, a drill, rented a welding machine and got some off-the-shelf-parts from Delhi.

With all the tools in place, the Enticer was ready for a radical redesign into a hardtail chopper with a high rake and low stance. After chopping the frame of the Enticer, Arpan realized that if making frames was as easy as chop-chop-snip-snap and duct tape, the world would have been a different place. He states that making a frame (in that particular situation) was the hardest task he had ever faced. That combined with the fear of his father’s reaction to a functional motorcycle in pieces made him feel that hardtail was not such a good idea for a first foray. After a short spell of lingering lack of enthusiasm, he toughened up and decided to go back to work.

This time around he took a more educated approach and decided to understand the things he was working with. He told us that he read tons of articles and books, took help from YouTube and created a flowchart of the things that were to be done stepwise. His first success came after a whole lot of meticulous planning and 2 months on blood and sweat. But it was a success… it was functional, it performed well, and looked exactly the way Arpan wanted it to look.

This is how he started out and it brought a certain clarity to him about the methodology and the steps involved… knowledge that he used to the fullest for his next builds.

The source of inspiration

We asked Arpan about his source of inspiration to which he had this to say: “I have a strict policy of following design philosophies emphatically. As an example, if it is a cafe racer, it has to have a certain stance and follow the lines that it is meant to. Everything that is built has its own set of rules and design proportions which can be bent to a small extent but not too much.”

He also takes makes sure that he has a connection or a common wavelength with the client in order to have a proper discussion on the design brief. While designing, he also makes sure that the motorcycle not only follows the vision of the client but also fits the clients’ physical attributes and preferences. He is if the belief that motorcycles made at Bespoke Designs have to be tailor-made, like a suit from Savile Row… It has to fit just right.

Most of the build requests that Arpan accepts come from all around the country. If asked about a certain demographic, he says that the average age of his audience is between 24 to 35. But he refers to age as just a number and believes that there are a lot of people out there with a vision regarding a certain way they want their motorcycles to be. Despite the refined criteria, Bespoke Designs have built 14 motorcycles so far. Every domain comes with its own set of challenges and so we asked Arpan about his biggest challenge and his answer was, “Turning down requests by clients.”

He went on to explain, “I turn down requests that would structurally impair a motorcycle or alter it fundamentally making it prone to failure in the long run. It is dangerous and so, I have actually had to let go of builds for this very reason. The client may only see it as a small thing but the truth is that they are massive engineering flaws. They have been designed with the laws of physics and structural integrity in mind.”

“Companies tons of money and a number of years conducting R&D to manufacture parts and there is no way that a builder can do so in one month and deem it 100% safe. And that is why I do not prefer and I do not suggest making major changes in the rolling chassis,” he added.

The build process in the Bespoke Designs workshop starts with some sketches and ideas that provide Arpan with a rough figure to start with. Once the vehicle rolls in and the teardown happens Arpan uses cardboard or wire templates to visualize the lines and proportions. The commencement of the next phase only happens once he is fully satisfied. Post that, Arpan decides on the parts that can be sourced or if they can be made by him in the workshop. And that’s planning and prepping. The next step is making the parts. If the fuel tank is taken as an example, Arpan uses a planning hammer and an English wheel to shape the thank. After that, it is TIG welded or oxy welded according to the need and the specification of the metal being used. 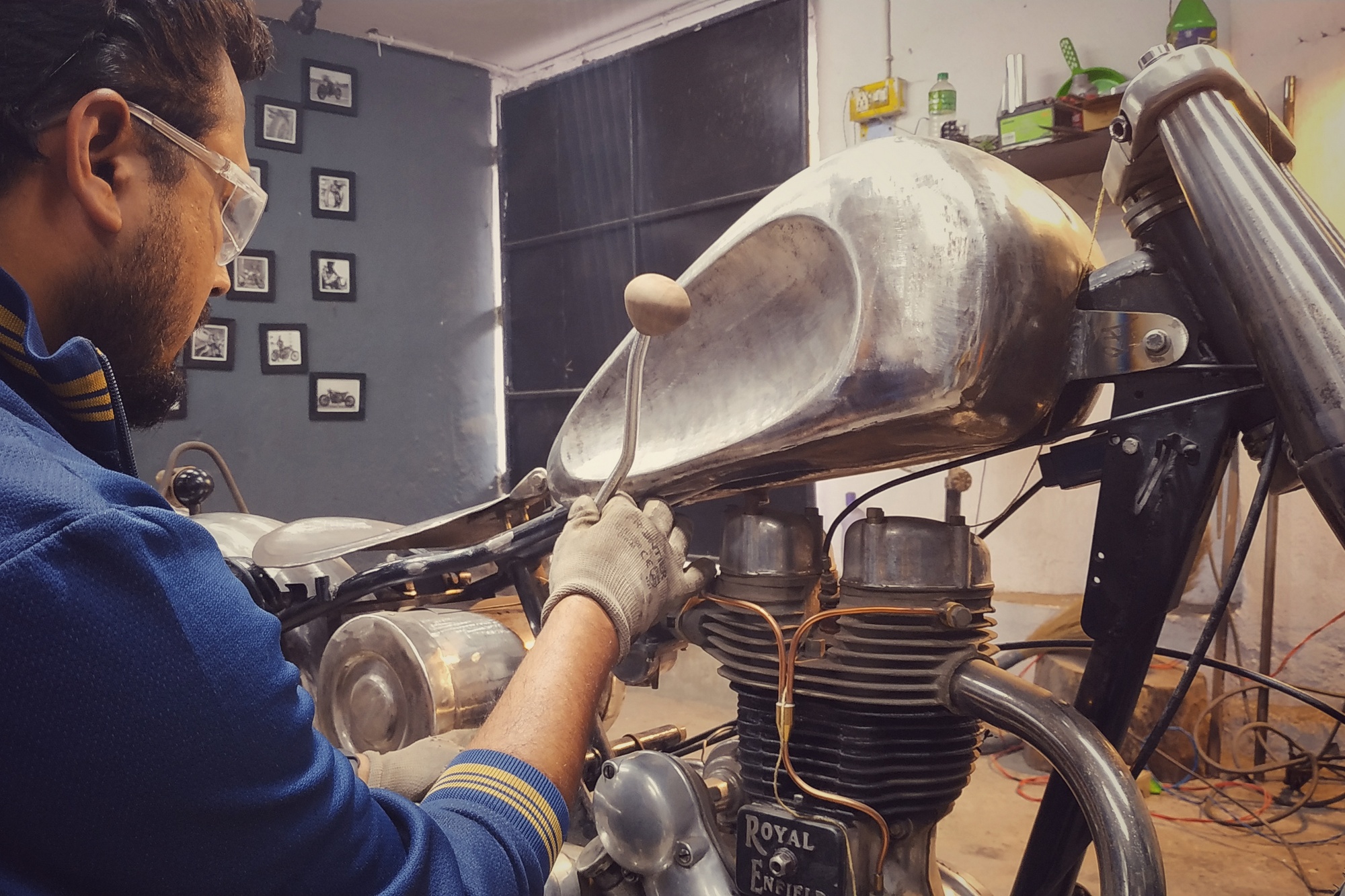 The painting is done in-house but it has to be impeccable and so Arpan is never satisfied with his own finish. In cases like that, an expert is called. The rerouting of the electronics and harnesses after that is taken care of by Arpan though.

Depending on the vision, design complexity and intensity, a build takes him anywhere between 3 months to a year to finish. Once done, everything is tested and then finally, the motorcycle is delivered to a happy client.

We asked Arpan who his idols were and he said, “Indian Larry is the God of Choppers according to me. It shouldn’t be surprising that he is an idol for everyone in the industry. For me, Indian Larry Motorcycles is synonymous with hard work, dedication and an eye for detail. Jesse James is another top-shelf builder according to me. Jesse is an excellent metal worker and he can make metal flow like water with his excellent hand forming.”

“In India, Vijay Singh has to be talked about. He has not only one-upped the custom motorcycling game in India but has also put India on the world map in custom motorcycles. Vijay exhibits the most important trait of breaking stereotypes in our country. I haven’t ever met Vijay personally, but I can say that he is worth being an idol for budding builders in India,” he added.

Arpan’s opinion is that the Indian market is still evolving and with that, the custom motorcycle culture is also being accepted with open minds. India is a country that basically runs on two-wheelers. So the building blocks for the growth of the custom motorcycles are already in place as the evolution continues and the next chapter of the Indian two-wheeler story is written.

The vision for the future

Arpan says that in his vision for Bespoke Designs, he sees the brand making quality accessories that are ARAI tested, in addition to bolt-on kits for enthusiasts. And staying true to the reason why he went for the name ‘Bespoke’, he also hopes to have his minimalist furniture line in the coming years.