One can take a Lamborghini to the treacherous terrain of Spiti, one can take a Triumph Rocket for a ride in the trails or one can try to race around a track on a Supercross motorcycle. There’s something off about all these things, isn’t there? And that thing is, all those things can be done but should not be done. One must keep a Lamborghini on the tarmac, the Triumph Rocket should be used to cruise on the highways, and a supercross bike should be on a dirt track. Why the long intro you ask? Because there is one more thing that we can think of that should not be done but is being done. And that one particular thing is racing on the roads. 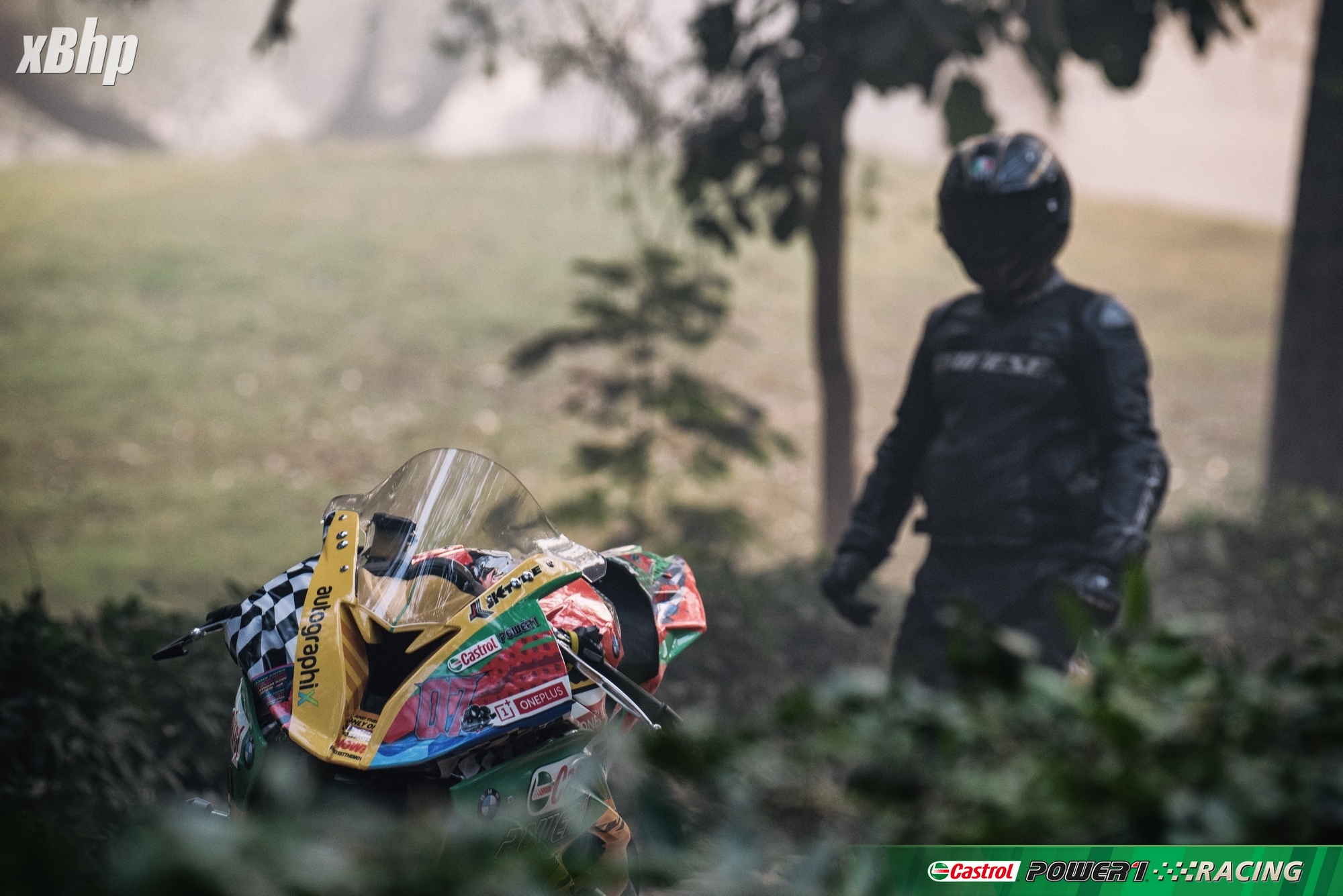 We at xBhp have always promoted safe motorcycling. Looking at the statistics, we lose way too many motorcycling brothers to road accidents. And a considerable number, if not a lot, is because of rash riding i.e. trying to be a racer on the road. So, we decided to make a small demonstration for that and that is what this is all about, why shouldn’t one race on the roads and why racing should only be done at a racetrack and on motorcycles that are meant for that purpose.

So, the racers of our Team #xBhpRacing went out with us and rode around the city on their race-spec motorcycles, Aakash Rajshakha aboard his BMW S1000RR and Monty Singh aboard his Triumph Daytona 675R. In addition to that, we also took out our own race-kitted BMW S1000RR and joined them. And what did we came up with? Quite a few reasons why racing, and racing bikes, should be limited to racetracks. 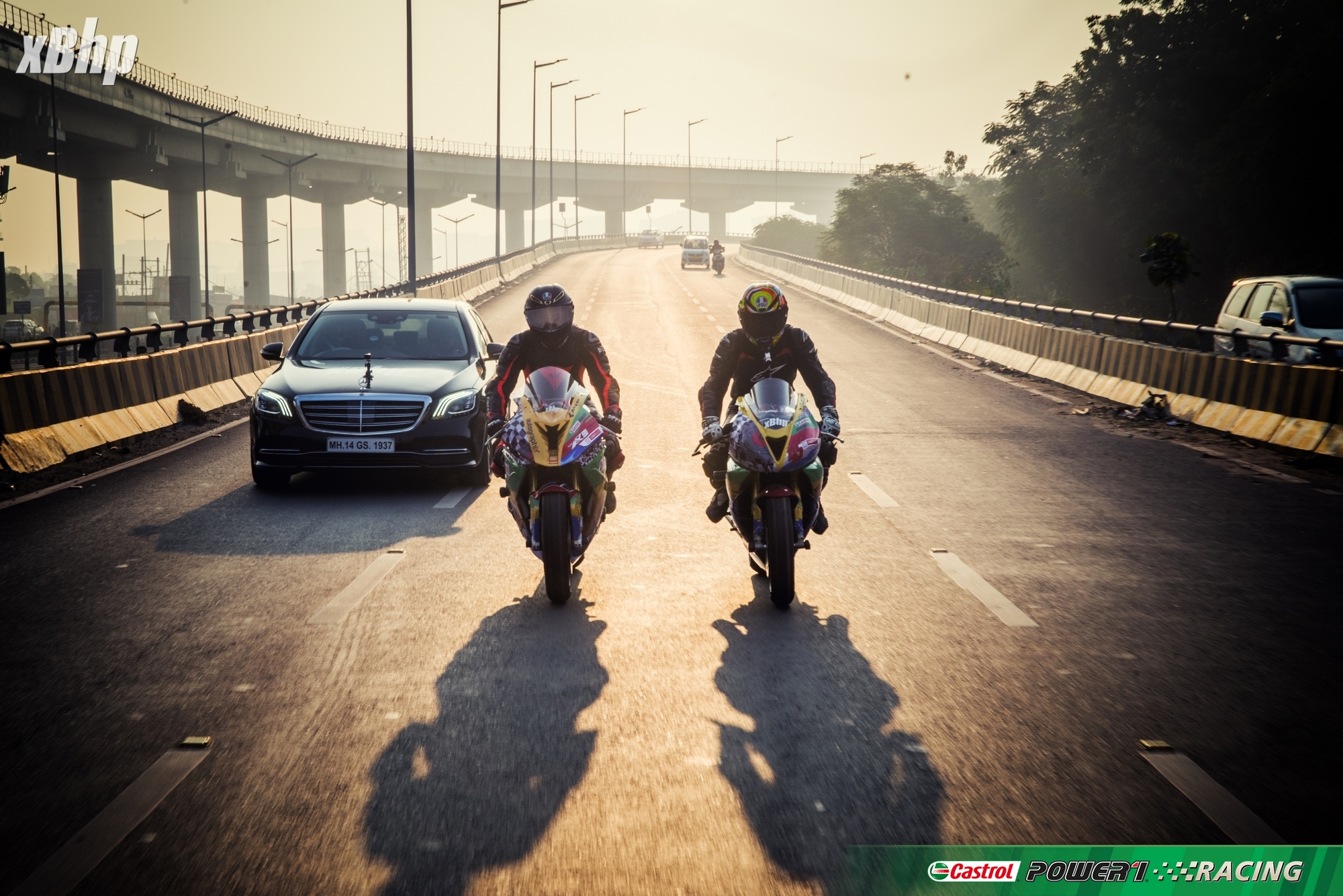 The first and the foremost and probably the most obvious reason is power. The huge amount of power these machines put on the tarmac is insane. The acceleration they can achieve is monstrous and the top speeds… well, there aren’t a lot of roads in existence which are meant for the top speeds of these machines outside of the track. Add to that Castrol POWER1 RACING, and the ‘acceleration’ turns into superior acceleration. We are talking about hundreds of horses, 0-100 times of less than 3 seconds and top speeds well over 300 km/h. And believe it or not, the human mind is barely able to contemplate all that on a racetrack where there is minimal danger of a ‘foreign object’ coming in your way and showing you god, literally or figuratively.

Apart from that, the majority of the vehicles on the road aren’t as fast as the machine is, or as fast as the rider is trying to be. And when that happens, bad things happen. After all, no one is lucky enough to make an escape or get away with those trespasses all the time. Try to imagine your average motorcycle putting out around 20-30 horsepower being modulated by the limited movement of the throttle. Now, more or less the same amount of throttle movement controls the power in excess of 100 bhp, sometimes twice that. It isn’t ‘rocket science’ to figure out the possible outcomes of an accidental downshift…

Racing motorcycles are extreme machines and the engines do a lot of hard work even under normal riding conditions. But in racing bikes, they are pushed to the maximum. The peaky powerband, insane acceleration and engine braking put a lot of stress on the engine which makes the use of quality engine oil paramount so that it keeps the engine cool, provides optimum performance consistently and elongates the engine life. Our choice of engine is our tried and tested Castrol POWER1 RACING which we had used on the engine of a Supercharged Ninja H2during our 20,000 km trip. Despite riding these monstrous machines on the road and in the midst of stop-and-go traffic, the motorcycles performed flawlessly and the credit for a lot of that goes to Castrol POWER1 RACING. You can check out the Castrol POWER1 range here: http://bit.ly/CP1_abs

The next aspect is the handling, dimensions and dynamics of these motorcycles. These machines are designed to go around the track as fast as possible and the track isn’t a straight line. Therefore, these machines are designed to respond to the slightest of inputs and boy, the possibilities (bad ones) with that are endless. And then, there’s the weight. These motorcycles aren’t really light. More than 150 kgs moving around on a whim with a rake as sharp as a knife, it’s isn’t exactly easy to handle these motorcycles especially when there are a million vehicles around you being ridden/driven by people who are in a heck of a hurry, justifiably and unjustifiably. That brings us to the next aspect, braking. These motorcycles are meant to drop speed faster than most things accelerate and even more so when they possess Castrol POWER1 RACING’s superior acceleration. For those who didn’t get that reference, that just means very quickly. But that is a good thing, isn’t it? Not necessarily, simply because you have other companions on the road as well most of them lacking a set of Brembo M50s or Stylemas. That results in you being able to out-brake the reason that made you brake and the others not being able to correspond. The result, not pretty.

What’s next? The ergonomics. These kinds of motorcycles can make you do Yoga in a way that can put Gurus to shame. Footpegs set excruciatingly rearwards, the reach to the handlebar longer than the hands of the law and the seat height… well, scaling mountains may be easier than mounting on these motorcycles. The exaggeration may not be real but the extremity of the ergonomics of a racing motorcycle is MOST DEFINITELY REAL. And imagine being in that posture and having to manoeuvre these beasts around a plethora of vehicles on the road. It is difficult and dangerous. Not to mention the fact that the posture makes you feel like a racer and well, the road isn’t the track. We mean to say that a random dude isn’t going to be cutting into your lane right in front of you if you aren’t racing with the likes of Manzi and Fenati that is. The toll the ergonomics take disrupts focus which is paramount when you are riding on the road. And then there’s the occasional ballsy youngster. How dare you ride a bike faster and cooler than him? How dare you try to take what’s his which is endless admiration and attention? How dare you hurt his ego? And now that all is lost for him, he must try to regain all that by putting up a challenge for you. It’s more like a show than a challenge but it is what it is. We are not sure if he is going to regain all that he has lost, but he might very well lose something, something real tangible this time. And who knows, it might be a suicide attack in which you are taken out as well. A suicide attack that even he isn’t aware he’s carrying out. Poor lad and poor you.

After all, that banter comes the most important part. At least for some people, it is. And that part is economics. Imagine spending a bomb on a motorcycle and then because of something stupid, shelling out even more for the rectification of something stupid. Here something stupid implies a crash. Major or minor, it is going to cost you. We may be materialistic talking about all that where one could lose much more than money but it is definitely a factor. We do not state that crashes do not occur at the track, but the chances are much lesser and in most of the cases, it is because of the crashee’s own mistake, which obviously can and usually is swallowed, with a pinch of salt maybe, but it is. On the road, it is not just you who’s mistake can cost you. It can be the pedestrian, it can be the auto-rickshaw driver, it can be another motorcyclist, it can be a car driver or it can be a truck driver or something else. It can even be a silly dog for god’s sake! The reasons or objects are limitless but our pockets aren’t limitless (well most of us can agree to that). So that is also something to be considered.

We may not have been able to cover everything and all the dangers that come along with racing on the roads but even one, even a single reason stated above is enough to get the point across. That is what we believe. And therefore, being a motorcycling community and believing in the spirit of motorcycling brotherhood, we urge our fellow riders to take their racing prowess to the track and steer clear of racing on public roads. Do that for your well-being and do that for the well-being of others. Do that for us motorcyclists who are still struggling to improve our image and the way we are perceived by the common folk. Do that for every single one of our brothers who have been lost to the road. And lastly, and we know this one is going to work, do it for your beloved motorcycle. 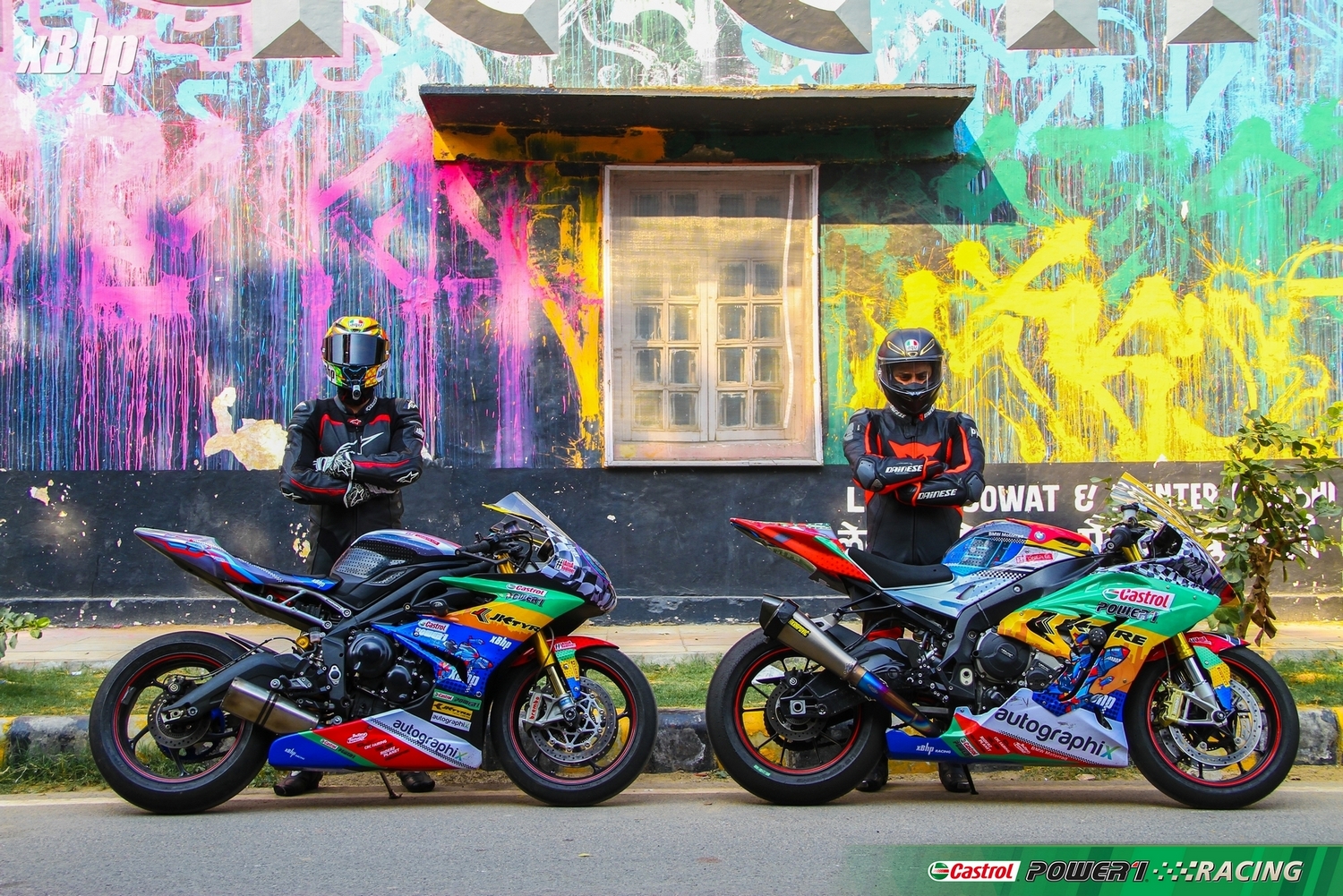 Ride Safe. Ride Happy. And do not race on the roads.