It has been more than two years since we have been living with the Indian FTR 1200 S. During this time, a plethora of machines have been added to the xBhp Garage. And yet, contrary to the norm, it still feels as charming as it did on the day we took the delivery. The novelty was supposed to wear off, wasn’t it? But it didn’t. That, among other things, is a mark of a truly great motorcycle. In simplest terms, flat tracking involves racing on an oval dirt track. Inevitably, competitors sliding side-by-side, drifting, and sometimes crashing at high speed are part and parcel of this sport. As a result, it makes for scintillating action and hence the popularity it enjoys. With that comes an opportunity for manufacturers to showcase their engineering acumen. Indian Motorcycle has been a part of the flat tracking scene for a while now. But in recent years, their participation has turned into utter domination. All of that was a result of their purpose-built Scout FTR750- a competition only V-twin motorcycle meant with a lightweight frame and agile dynamics. It had everything it needed to burst on the scene and assert its dominance. So that is exactly what it did. The inspiration behind FTR 1200 S and the champion of flat tracks across the US- Scout FTR750!

Another thing that it did was to pique the interest of motorcyclists, not just in the USA but around the world. Was its performance the only factor at play? It was a major one but not the only one. The most important one, according to us, was the way it looked. That should explain why Indian Motorcycle was being flooded with requests to make it into a street-legal production model. After all the incessant requests and demands, the folks at Indian Motorcycle decided to give it a go. The Indian FTR 1200 is a result of that. But they knew that a simple conversion may not work as well as making a completely new motorcycle with the spirit of the Scout FTR750. It was a tall task since big cushy cruisers were predominantly what Indian Motorcycle worked on. A competition-only flat tracker is one thing and a full-blown production model that could work on the street without giving up on the Scout FTR750’s charm was another. The engine alone was a challenge because despite being a V-twin, the forte of Indian Motorcycle, it had to be completely different from its siblings. It had to be quicker, revvier, and more powerful. Then there was the challenge of packaging. Again, coming from a big cruiser background, Indian Motorcycle had its work cut out for it to build a lithe and agile street bike. That engine is packed in a lightweight trellis frame supported by a trellis swingarm. The suspension comes from ZF Sachs and on the S model, you get fully adjustable USD forks and fully adjustable piggyback IFP on the rear. On both ends, you have 120mm of travel. Brakes come from Brembo and the 17” wheels on both ends come with bespoke Dunlop D3-R tyres. All of these high-end components are wrapped in a lithe body with a drop-dead gorgeous design. To base their first naked street bike on the FTR 750 proved to be a winning move for Indian Motorcycle. It is evident by the fact that the FTR 1200 has been referred to as one of the most beautiful motorcycles in the market today. 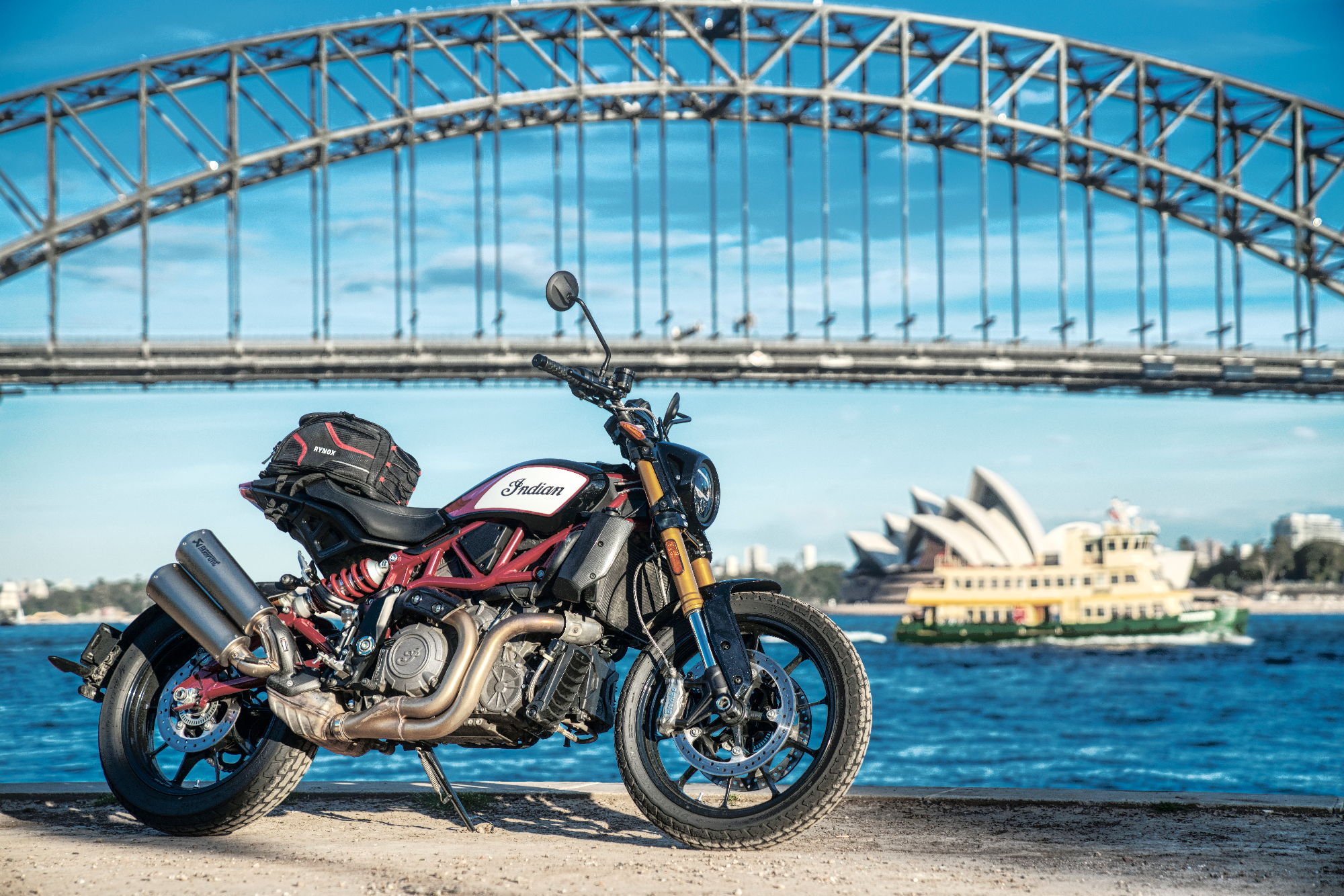 The Indian FTR 1200 S in Australia… isn’t it the prettiest not-so-little thing?

That is a brief story of how Indian Motorcycle used their flat tracker to make their first street tracker and also, define a new direction for the brand. We have ridden the FTR 1200 on the road and it is a stellar motorcycle in that regard despite its origin and execution. Dollops of power, hypnotic handling, and loads of presence. Yet, we have felt the urge to take it on an off-road excursion quite a few times though nothing substantial has happened in that direction. That was until Simran King came into the picture. He needs little introduction because of his exploits on the racetrack. With two championship wins in the JK Tyre National Racing Championship 1,000cc class and multiple podiums in the Bahrain Superbike Championship, Simran is an accomplished road racer. Fortunately, he was as curious as us to see how our FTR 1200 S would fare off the tarmac. And so, he took it for a little test at the OTR Dirt Park in Gurugram. This little arrangement satiated our thirst to see the FTR in action on the dirt and also, let Simran get some training for his upcoming races. Training off-road for road racing? Well, this is a good opportunity to talk about this particular method of training for road racers and the prevalence of flat tracking outside the US. Road racing riders have, for a while now, used flat tracking and MX as a predominant method of training to prepare for their races. From MotoGP to WSBK, most of the riders on the grid sharpen their skills off the road. It allows them to be more precise with the throttle which, in turn, allows them to control slides better. Riding off-road, especially flat tracking, also teaches one a lot about body positions and how the motorcycle behaves under those. These and a lot of other finer details make flat tracking a part of the staple diet for road racers. So, Simran’s curiosity also turned out to be a good training session for him. Firstly, the Indian FTR 1200 S is not a thoroughbred off-roader or a flat tracker. If it was, it would be limited to just that and not be too keen on being a good motorcycle on the road. Moreover, ours is in stock trim with stock tyres and so forth. So, Simran was under the impression that he’d have his hands full with a big 1,203cc machine with a lot of power going haywire on the dirt. While his apprehensions were not unfounded and true to some extent, he walked away surprised. Starting with the suspension, the FTR 1200’s suspension travel is a middle ground between an adventure motorcycle and a sporty, street-oriented motorcycle. As a result, it is stellar in the corners but still holds its own off the road. 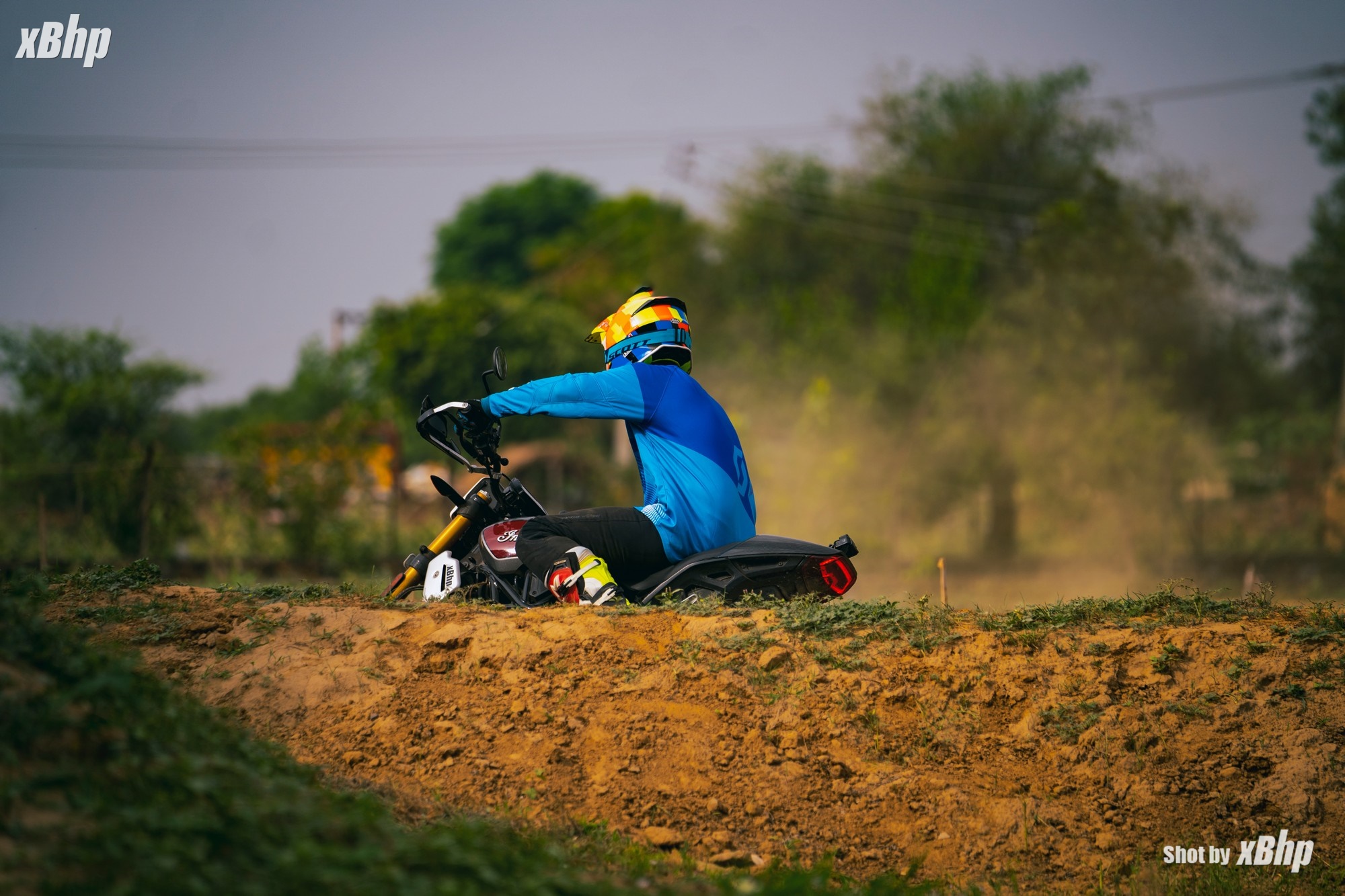 Then there’s the geometry. The FTR has a sharp-ish rake that helps negate its long wheelbase and makes it very flickable in the corners in addition to the straight-line stability aided by the wheelbase. While these may not be ideal for an off-roader, the FTR’s suspension and ergonomics (especially the toothed footpegs) help it quite a bit. The footpegs are set slightly rearwards which, again, is a small niggle while riding in the dirt. The engine though is where the spirit of the Scout FTR750 shines the brightest. It is punchy and despite its tall-ish redline, it has a lot of grunt in the low and midrange. The DT-3 R tyres from Dunlop offer a surprising amount of grip on the road. Surprising because of their pattern and profile. But in the dirt, they fall a tad short when things are grim in terms of loose stuff. They needed deeper grooves to make them more effective on the dirt but then, that would have cost dearly in terms of road grip. Despite all of that, we must not forget that we are talking about a motorcycle with a big V-twin and brilliant road manners. Expecting something like that to even work off the road is asking too much. The Indian FTR 1200 S more than held its own and that too on a track like that of OTR Dirt Park. Admittedly, a lot of it was down to Simran’s skill who piloted the FTR around and even took on some jumps! Credit must be given where it’s due and the FTR 1200 S deserves quite a bit of that.

The result of consistent efforts from passionate riders, OTR Dirt Park is a training ground for people to hone their off-roading skills. The people behind it come from different walks of life ranging from corporate professionals to students, all bound by a common thread which is their love for adventure and motorsport. Built by bikers, for bikers, the track is spread across a 3.5-acre piece of land with everything that an ardent off-road rider can ask for. From berms to super big tabletop jumps and whoops to a sand section, the track can test the mettle of the best of bikes and the best of riders. The technicality of the track is a result of the experience of its founding members, amounting to a collective 25 years in multiple rallies including Raid De Himalaya and Desert Storm!