We were invited by TVS Racing for an off-road track day, which would have none other than Aishwarya Pissay as the lead rider and coach. This track day seemed like a godsend for me as it was for women riders only. Being the only girl in the xBhp core team, I went to attend it. When I reached the venue ,Anekal Offroad track, in Bangalore, I had the company of 6 other girls from various publications who all had come to participate in what was going to be one of toughest but fun filled day of their motorcycling career. It was just that for me at least. I am not a newbie on a motorcycle, but riding a motorcycle sans the reassuring tarmac is a completely different ball game, which we learnt the hard way soon after. But thankfully, we had the company of Aishwarya Pissay as our mentor who led us through the nuances of off-road motorcycling. To make the matters a bit more exciting and challenging, we were given the all new rally spec Apache RTR 200s to ride. These were the same machines that TVS Racing will be using to participate in the upcoming rallies and events The rally spec RTR 200s have a 200 cc, 4 stroke, single cylinder SOHC engine, carburetor induction with an air/oil cooling system system suspended in a split-synchro double cradle frame . The bike is lighter than the production Apache 200 and has more suspension travel to aid in off-road riding. And who could be a better teacher for us in this training session than Aishwarya who has multiple national rally championship wins under her belt including Raid de Himalaya, Dakshin Dare, & INRC as well as road racing champions including TVS Ladies One Make Race & MRF National Road Racing Championship.

And besides being the domestic star, she has also been doing great in international rallying as well. She was the first Indian woman rider to participate in the Baja Aragon Rally 2018. Recently, she also competed in the FIM Baja World Cup in Dubai. 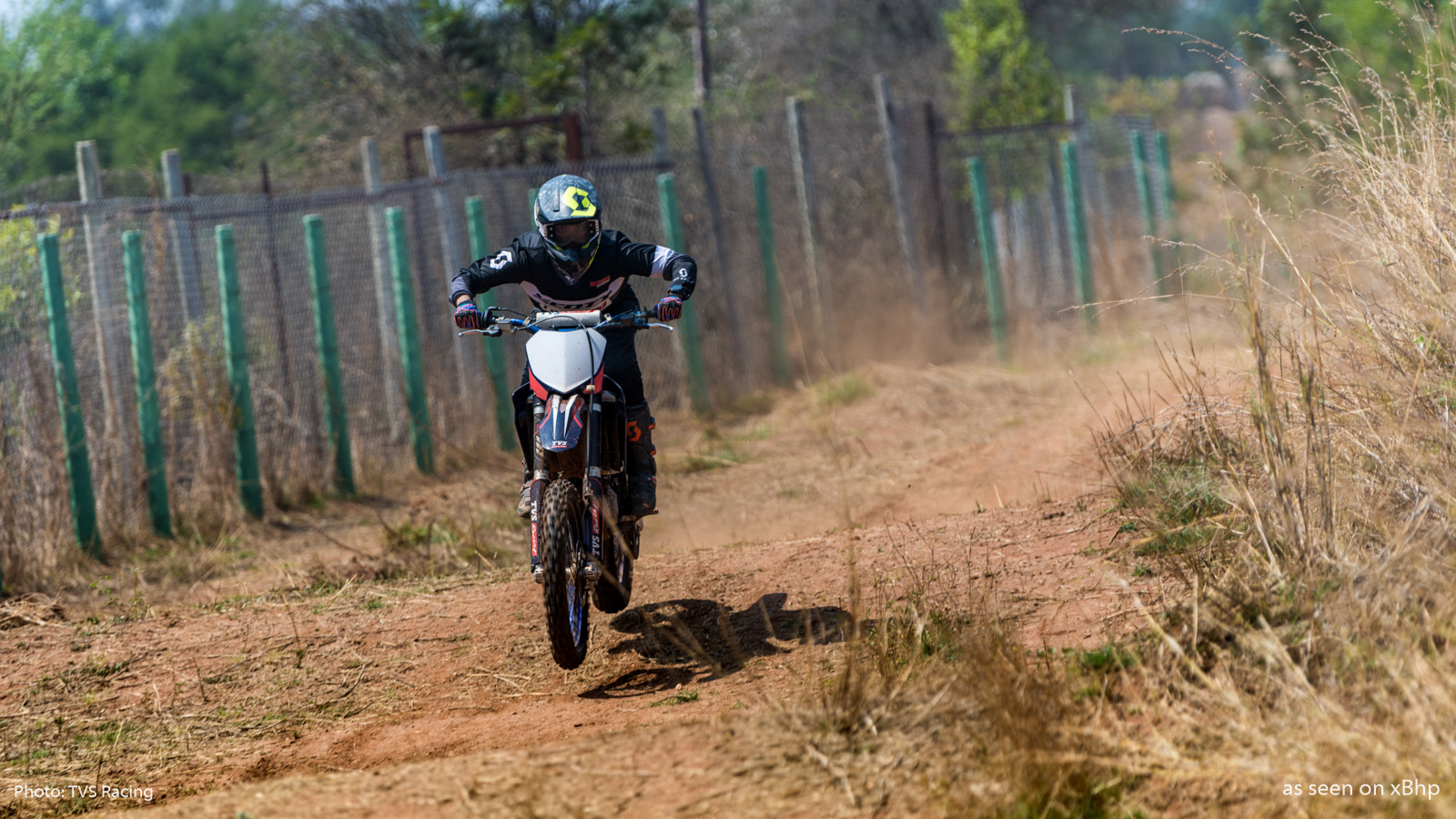 Aishwarya in action during the track day

After the briefing and the familiarization session with the bikes, the training began with tips from Aishwarya on adopting the correct body posture for off-road motorcycling, and how to shift body weight and adopt different body postures according to different turns and obstacles and how to ride the bike standing upright on the footpegs. And as with every sport, getting the basics right is often the hardest part. We tried and failed, only to be encouraged by Aishwarya to try harder. 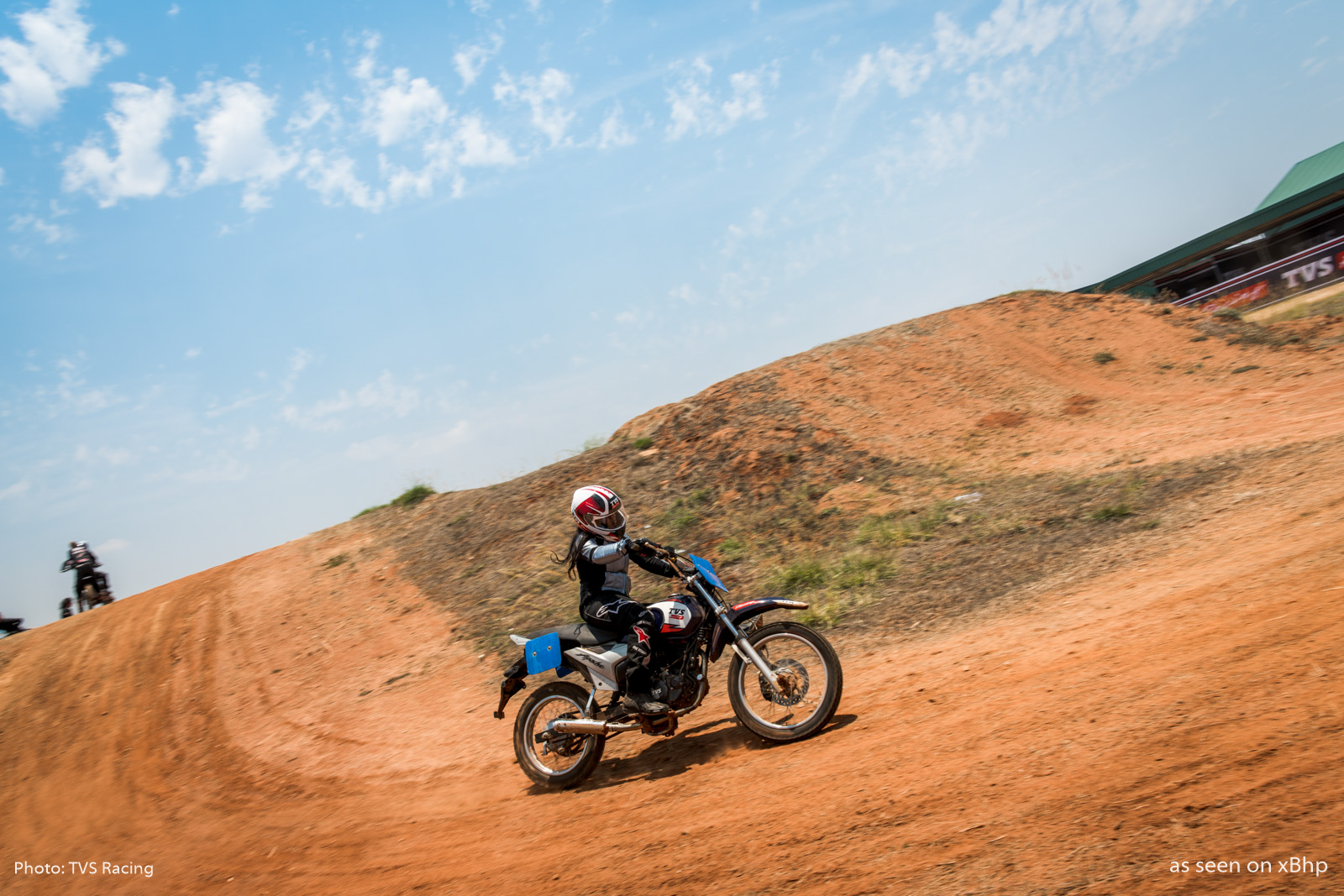 Being a road rider myself throughout my biking life, unlearning the riding techniques that you employ on the road was another challenge. But all the hard work by the riders and the coach seemed to have paid off in the end as I was feeling way more confident in tackling the absence of flat tarmac and also managing my body posture a little better than what it was when we started. Clearly, one day of training was too little to master all the techniques employed in this sport, but we surely got a lot of insight into the world of off-roading and a new direction to ride into.

I would like to take a moment to thank TVS Racing for inviting us to be a part of this track day. I look forward to attend more such track days in the future.