“Our flag does not fly because the wind moves it, it flies with the last breath of each soldier who died protecting it.”

The valiant warriors who take a blood oath to protect the Motherland are not the ones to hesitate when their pledge requires sacrifice. The soldiers of the Indian armed forces are an entirely different breed, their countless sacrifices a thundering testimony to the unwavering loyalty towards their land and people. They dedicate their lives to protecting their nation’s sovereignty and the freedom of the people and ensuring their safety even if it means suffering harsh weather conditions, braving landmines and gunfire, and at times even facing backlash from citizens.

These people, rightly bestowed with the title ‘patriots’, are every country’s most valuable asset. During the times when India cowered under the British, it was the warcry of the freedom fighters that got us our independence, and post-independence, it was the lionhearted armed forces that kept the enemies back. These are the people who willingly laid down their lives just to see the tricolour fly high. They deserve every bit of respect and a tribute to parallel their contribution. 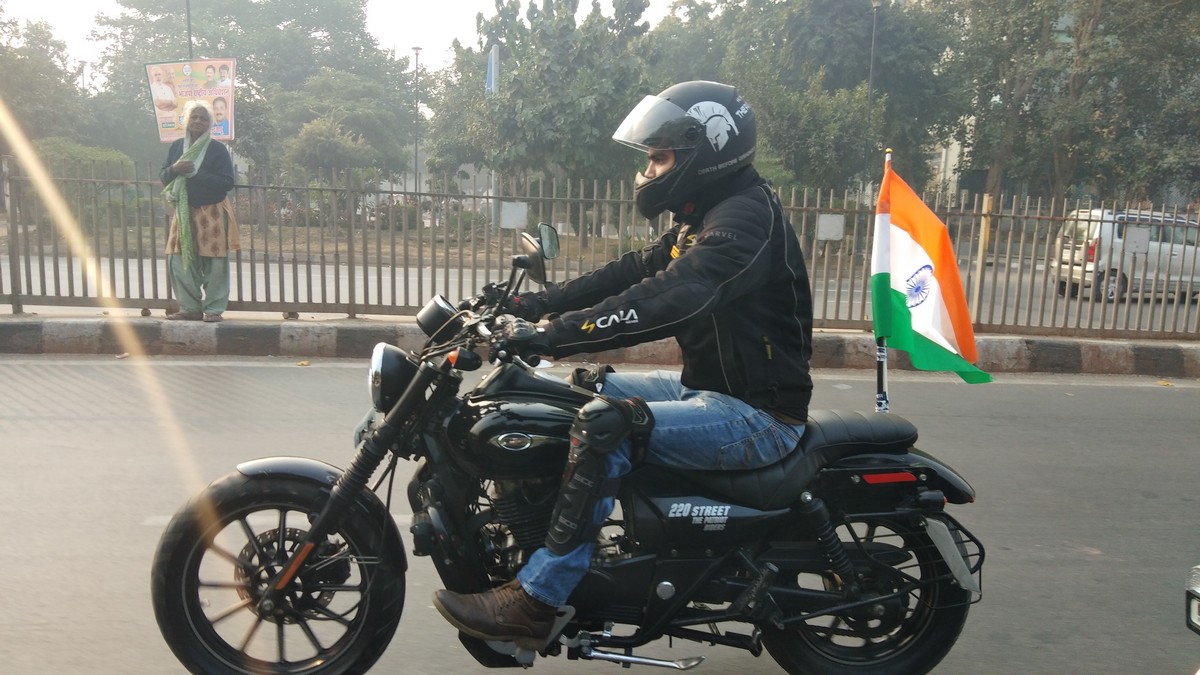 It is not an easy feat given all that they’ve done for the country, but one man has come quite close to it. We are talking about Hutansh Verma, a motorcyclist and an artist who limns the portraits of fallen soldiers. And post that, he himself delivers those portraits to the family of the soldier regardless of their location. His task is not an easy one but he is passionate about paying respect to the fallen via the means of his art and via motorcycling. And so, here’s his story.

Hutansh Verma is based out of Delhi and he is an art teacher at the Manav Rachna International School, Noida. He is also an avid motorcyclist and loves riding almost as much as he loves his art. He is the owner of a Benelli TNT 300 and a Bajaj Dominar. He has covered numerous parts of India on his motorcycle(s) while carrying out his mission. It was in 2014 when Hutansh was inspired to carry out this task of painting the portraits of fallen soldiers. We all feel for those who lose their lives in the line of duty but he wanted to do something more. In addition to painting the portraits, he also decided to deliver those portraits to the families of those soldiers personally ensuring that the portraits reach their destination the way they were meant to reach. Being a rider, whenever possible, Hutansh rides his way to the families of the soldiers. He has been to places like Rajasthan, Punjab, Gujarat, Himachal Pradesh, and Uttarakhand in the pursuit of the fulfillment of his mission. A mission that he christened Portraits of Patriots.

Like we mentioned, Hutansh started in 2014 and since then, he has delivered 63 portraits to this date. We got a chance to talk to him where he explained that the reason why he does this is that he feels that it is his duty as a citizen of this country to do his bit. He wants to honour the real heroes of this country and we believe that there are not a lot of better ways to do that than his. 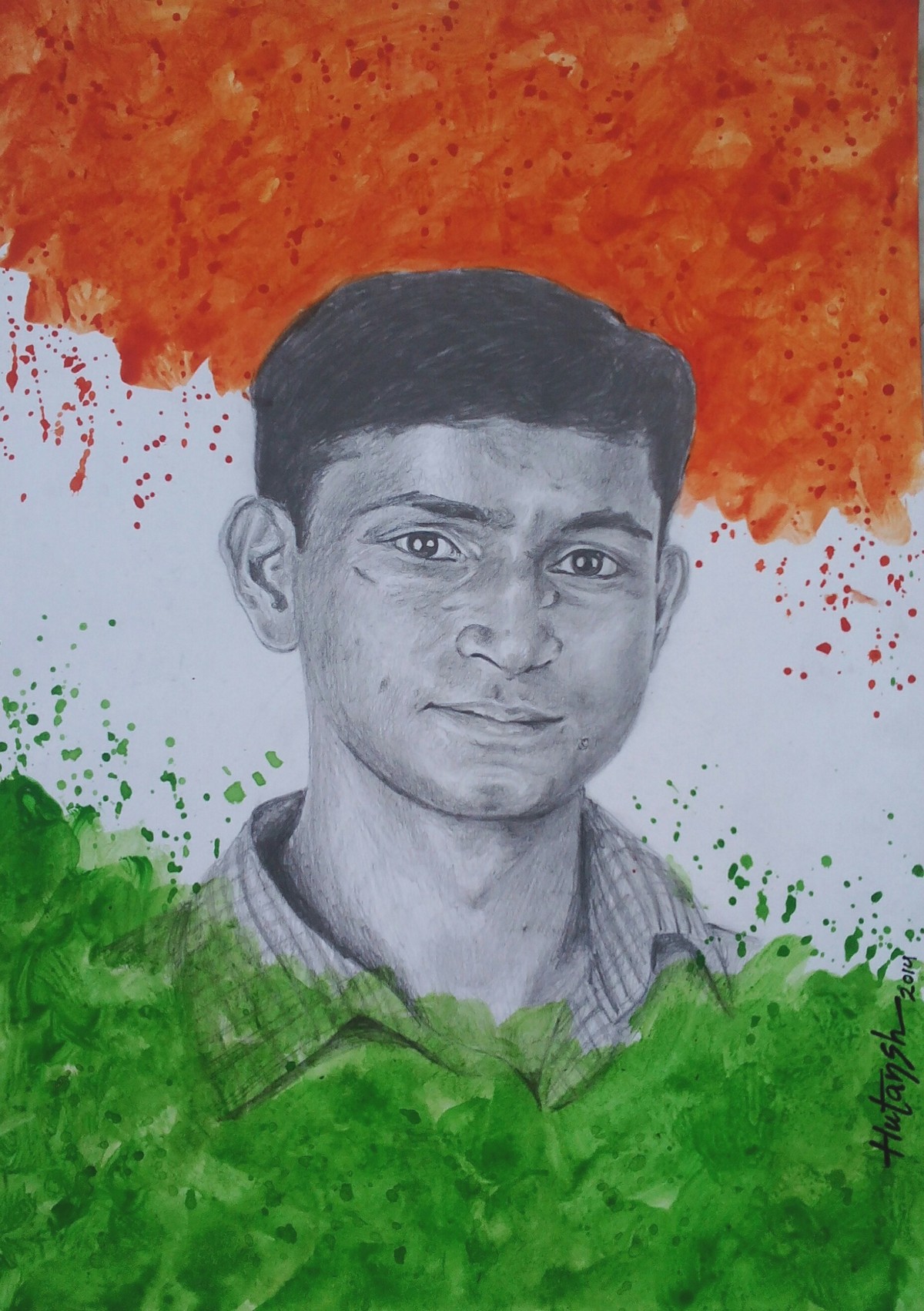 He also told us that meeting the families of the soldiers, while being a tormenting task, is something that soothes his soul. His is not an easy job as being there and being able to share the pain of a family who has lost their loved one is an incredibly difficult task. But the portraits that he delivers to them remind them that the soldier in the portrait is a hero and they are getting the respect that they deserve. And the warmth and the happiness that it imbibes in the family members is a joy like no other.

He also told us about his experience of visiting the War Memorial. He told us that while many people visit the place, he could actually feel the souls of the heroes the names of whom are etched there and will remain there till the end of time. He told us that there were more than 25,000 names on there when he visited and unfortunately, more have been added.

Quite a few names were of the soldiers whose families he had met. We can only imagine the pain that one goes through during an experience like that. He went on to tell us that there were a lot of bricks that did not have any name on there and he recalls praying for it to stay that way. He wishes for those bricks to remain vacant and that no name makes it to those bricks in the future… Via this article, he also urges everyone and not just the motorcyclists to pay respect to the soldiers of the Indian armed forces. He quoted an example of the Kargil War of 1999. Leh-Ladakh is like a pilgrimage for motorcyclists.

It is on the bucket list of so many motorcyclists but Hutansh told us that more than 500 soldiers lost their lives in that war and it is the result of their sacrifice that we motorcyclists can reach our dream destinations of Leh-Ladakh safely and peacefully. He urges everyone who goes out on a roadtrip, not only to Ladakh but anywhere, to simply smile and salute if they see a soldier or a convoy of soldiers.

And we agree with Hutansh as this small gesture goes a long way in delivering our message to the soldiers… the message of respect. Hutansh says that he’d love to run out of portraits to make someday but even if that day doesn’t come, he will keep doing what he does. We respect the ideology of this amazing rider and artist and we wish him the best in his endeavour.