While motorcycles come in different shapes and sizes, more than the visual difference it is the mechanical difference between them that enamours a motorcyclist. And when it comes to mechanical variations, an engine is almost always the biggest differentiator. If we let go of the ‘electric revolution’ for a minute, almost all the engines are ICE (internal combustion engine). In those too, 4-strokes are the most prominent ones nowadays. And despite those similarities, different engines have a very distinct feeling attached to them and the emotions imparted vary as well.

And so, the major difference between them is the number of cylinders and the configuration. And since we know our engines (somewhat) and Castrol POWER1 knows how to take care of them, xBhp and Castrol bring to you ‘Ultimate Engineering’, a brief crash course of the various types of engines. We will be focussing majorly on 4-stroke engines but those of you who prefer 2-strokes or the quirkier configurations, stick around for the honourable mentions.

Note: The engine oil and the grade recommended for each motorcycle may vary as it depends on the local climatic conditions, among other factors. Please refer to your Owner’s Manual for more details.

Perhaps the most common configuration, the singles are the only choice (almost) when it comes to utility motorcycles and even some higher capacity motorcycles. The reason for that is very simple, they are cheap to manufacture and maintain. In all probability, more than 90% of all the motorcycles and scooters that we see on the road are propelled by a single-cylinder engine. Low-capacity singles are also preferred for utility motorcycles because they offer great fuel-efficiency and the running costs remain low throughout their lifespan. Even some entry-level motorcycles prefer this configuration to familiarise the newer riders with sporty riding. A stellar example is the Pulsar 125 seen here. The Bajaj Pulsar 125 is a fantastic and relatively cheap entry into the performance motorcycling world of ‘Pulsars’. It offers the Pulsar feel coupled with accessible power and ease-of-riding and also, good fuel-efficiency and so, despite being a motorcycle with decent performance for a beginner, it is easy on the pocket too. Talking about the slight disadvantages of a single-cylinder engine, due to the lack of another piston to balance out the forces, single-cylinder engines are generally less refined than multi-cylinder configurations. But this is one drawback which is much less pronounced when it comes to low-capacity singles than in their mid or high capacity counterparts.

The next most common configuration when it comes to motorcycles takes us slightly closer to the performance aspect of motorcycling. The mid and high-capacity singles. The advantages remain similar, ease of manufacturing, ease of maintaining and slightly higher running cost than low-capacity
singles. While things do get a little complex with the extra cooling needs fulfilled by oil or liquid cooling, things still remain relatively less complex when compared to multi-cylinder configurations. Mid-capacity singles can be referred to as the gateway into the world of performance motorcycling with numbers that aren’t too much for a beginner and yet, keep enthusiasts engaged as well. This is also a preferred configuration for offroad motorcycles for the outright grunt which helps when the terrain gets rough. Also, the ease of repair puts the mid-capacity singles high on the preference list for these kinds of motorcycles. A stellar example of a mid-capacity single done right is the crown jewel of TVS Motor Company, the Apache RR 310. A reverse-inclined single-cylinder engine is a unique one which allowed the engineers to use a long swingarm without increasing the wheelbase striking a perfect balance between straight-line stability and sharp handling. And the power on offer easily takes it out of the ‘slouch territory’. The major disadvantage is, of course, refinement. As the capacity increases, singles tend to get more vibey but innovations like counterbalancers do help the matters to some extent.

This particular configuration goes by many names; inline- twin, straight-twin, or parallel twin. The most correct way would be to call it inline-twin. Some people like to call this configuration a parallel-twin based on the firing order i.e. when the cylinders arrive at the TDC (top dead centre) and BDC (bottom dead centre) together. But mostly, simply the parallel placement of the cylinder earns them the name, parallel-twin. These types of twin engines are a sign of one having crossed into the world of performance motorcycling and their readiness to lay down some serious hurt to the tyres and the tarmac. And despite that, this configuration offers respectable fuel-efficiency.

These engines, predictably, produce more power than a single. The one problem that a ‘proper parallel-twin’ has is the slightly peaky nature. They need to be revved to feel their liveliness but the parallel-twin in the discussion here deals with that problem very effectively. The KTM 790 Duke’s LC8c parallel-twin, because of its unique firing order, mimics a V-twin despite being a parallel. In that sense, it has the immediate throttle-response of a single, the low-end grunt of a V-twin and the smooth-revving nature of a parallel-twin. The disadvantage related to a parallel-twin, in general, is what we mentioned before, they can be peaky if the firing order is not altered and, of course, the refinement dwindles as the capacity increases.

Grunt was merely a word before V-twins. This engine configuration gave meaning to the word… at least when it comes to motorcycling. These engines are a force of human nature. It is because of this nature of theirs that they make their way to so many performance motorcycles be it on-road or off-road. The V-twin configuration is also perhaps the most modular one with so many variations possible.

Depending on the angle between the cylinders, V-twins come in many variations. A 90° V-twin is referred to as an L-twin by some. At the core of it though, V-twins are more or less self-explanatory… 2 cylinders mounted at an angle.

Another differentiating factor of this configuration is mounting. They are usually mounted longitudinally in a motorcycle chassis which helps keep the motorcycle narrow but may increase the wheelbase in some cases… something that can be dealt with by playing with the angle. While many historic motorcycle models have been powered by the V-twin, an awesome example of the same sits in our garage… the FTR 1200 S. Riding this motorcycle was what made us come up with the opening line of this section. The torque is ferocious and so is the power and unlike a usual parallel-twin, it does not need to be revved to the moon to experience its fierceness.

A couple of disadvantages come in the form of refinement and cooling, problems that are more and more pronounced as the capacity and revs go up.

This rather uncommon configuration of a 2-cylinder engine is called flat-twin or boxer because the cylinders are horizontally opposed and on the move, they can be visualised as two boxers going at it. This configuration also has the distinction of being the most refined and smooth even without the use of counterbalancers. The reason… they have an almost perfect primary balance due to the opposed cylinders and can be further amplified by regular firing intervals. The flat configuration has seen itself being used very effectively in cars from Porsche and Subaru. In the motorcycling world, BMW’s ‘Boxers’ are the most well-known. BMW Motorrad uses the flat-twin configuration in many of their motorcycles including the R 1250 GS but the best rendition is one of our personal favourites, the BMW R NineT Racer. It just goes a bit too well with the cafe-racer attitude of the R NineT Racer.

A few more advantages, in addition to the refinement levels, come in the form of a lower centre-of-gravity and efficient air-cooling as both the cylinder heads are exposed to equal amounts of air. 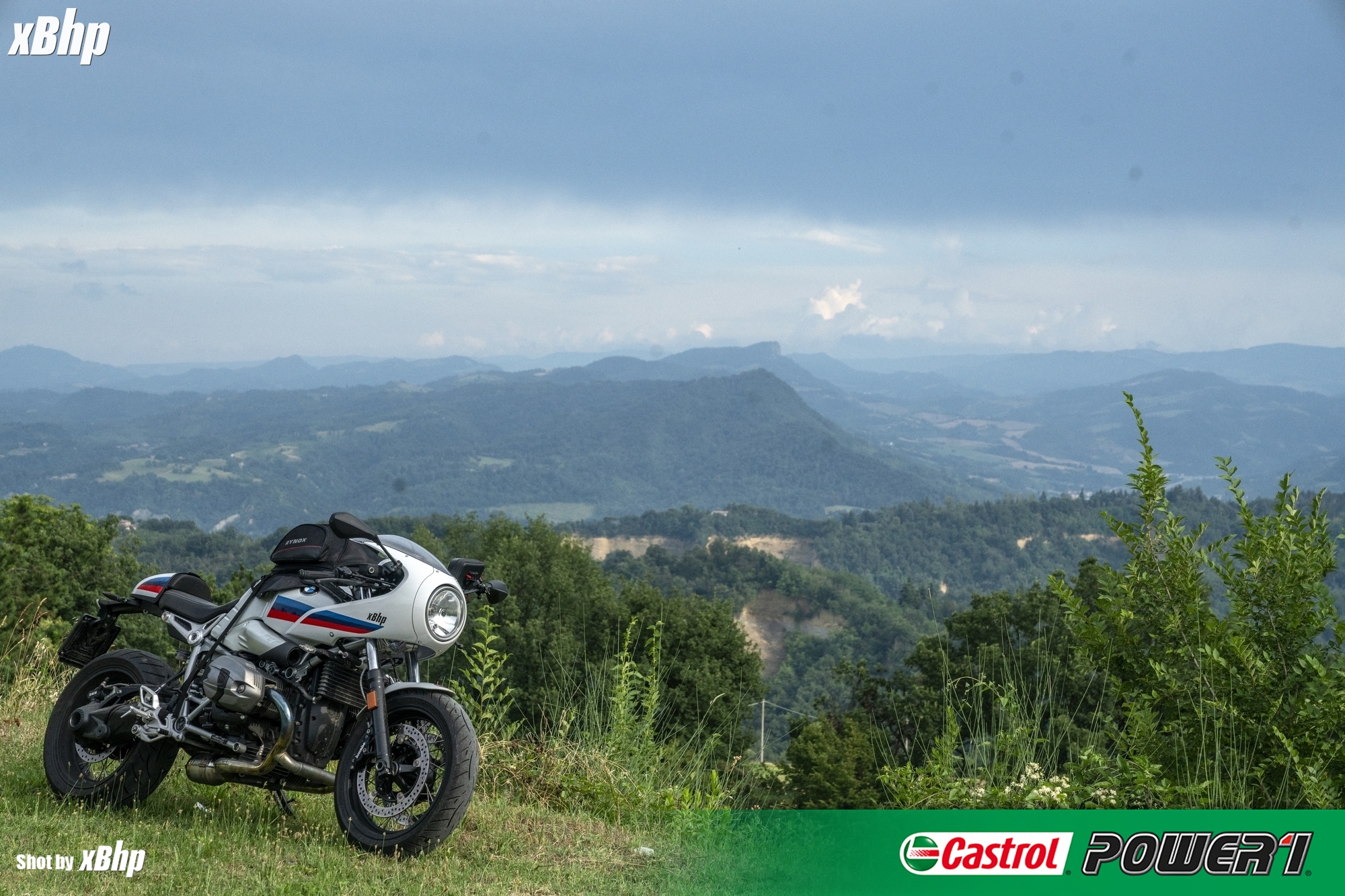 The disadvantages include the width of the motorcycle which is increased significantly. And while they run almost tirelessly and without a lot of palpable stress, these engines tend to be relatively less powerful than V-twins. Plus, they do not sound as good as some big V-twins.